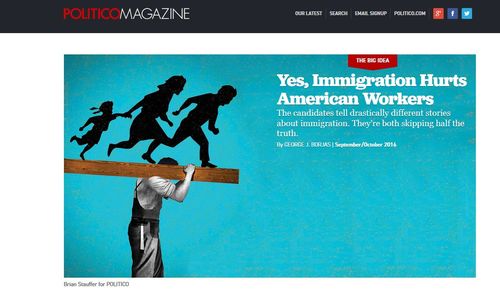 National Data | October Jobs: Great Month For Native-Born Workers, But There Are So MANY New Immigrant Competitors

See also "I Specifically Requested The Opposite Of This"; Immigration To U.S. Reaches All-Time High by James Kirkpatrick 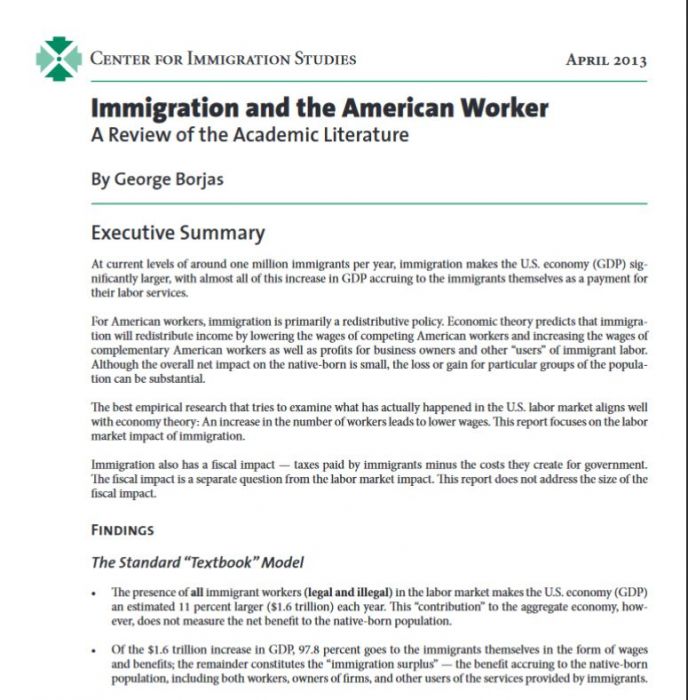 Illegal immigration is a security problem, and Trump is justifiably hammering that point home in the days leading up to the mid-terms. Legal immigration is an economic problem. Just how huge a problem is made clear by data released with the October jobs report. Immigrants, legal and illegal, accounted for more than half of working-age population growth over the past 12 months. The foreign-born working-age population grew 1.383 million, the U.S.-born rose 1.364 million. Nearly 5 million native-born were unemployed in October.

Payroll Survey job growth, 250,000 in October, was well above the Wall Street consensus projection of 208,000 new jobs. The “other” employment survey, of households rather than employers, was an even more spectacular victory for Trumponomics: six hundred thousand new jobs created, with the vast majority accruing to native-born workers.

October marked a sharp break in native-worker displacement, with 94% of new jobs going to natives. By comparison, September and August were dismal. In September, native-born workers received less than one-quarter of jobs created; in August they lost jobs while immigrants gained them.

Why the surge in native-born employment? Higher wages have made work irresistible, even to die hard couch potatoes. The year-over-year increase in pay climbed to 3.1% in October from 2.8% the prior month, touching 3% for the first time since the end of the Great Recession in mid-2009. This good news is tempered by the realization that even larger wage gains would have transpired had the immigrant share of employment not increased. Economist George Borjas estimates that every 10 percentage-point increase in the foreign-born share of employment reduces native wages by 3% to 4%. [ Immigration and the American Worker, by George Borjas, CIS.org, April 9, 2013, and Yes, Immigration Hurts American Workers , Politico, October 2016] (Since mid-2009 the foreign-born employment share has risen by about 2.5 percentage-points – implying a 4.1% wage gain had an immigration moratorium been in effect.)

The October gains have not undone the damage done by eight years of Obama. Native-born American workers lost ground to their foreign-born competitors throughout the Obama years. And, as seen in the chart above, this trend accelerated significantly in the months leading up to the 2016 election.

Trump has barely broken the trend. Since taking office in January 2017, he has presided over a labor market in which immigrants have gained 1.478 million jobs, a 5.7% increase, while native-born Americans gained 3.003 million jobs—a rise of 2.4%. As far as the labor market is concerned, “America First” has not (yet) translated into Americans First.

Immigrant working-age population gains of 1 million plus (year-over-year) in August, September, and October are less than you might expect given the robust job growth—as recently as April. the influx was at 2.2 million. But immigrant workforce growth is still high in absolute terms: in contrast, it actually shrank in the last five months of 2017 when the Trump Effect seemed to be really taking hold.

These are net figures. Over a 12-month period an average of about 300,000 immigrants die and an equal number leave the U.S. voluntarily. So October’s 1.383 million net rise in adult foreign-born population implies that an astonishing 1.983 million foreign-born individuals may have actually settled in the country over the past year. (This excludes tourists and other short-term entrants.)

Immigrants accounted for 17.5% of total employment in October. While slightly below September’s 17.6%, and well-below the all-time high (18.1% recorded in April), the October figure is fourth highest among the 118 months for which we have data.

Note to native-born workers who are finally coming off the couch: step quickly, boys and girls. Your replacements are crossing the border in near record numbers: the immigrant population of working age (16 years plus) increased by 1.383 million in October, the third consecutive month of 1 million+ growth. With legal immigration running at about 1 million per annum, this implies an illegal worker influx potentially in the hundreds of thousands. (See below.)

The Border Patrol has a bad habit of releasing monthly crossings data sometime after the jobs data comes out. The latest Border Patrol data are for September – and they are bad. That month the agency apprehended 50,568 individuals, a whopping 62% more than they apprehended the same month last year. The good news: 2018 apprehensions through September are still below Obama’s catastrophic last years. The bad news: it’s clear that the collapse in the early months of Trump’s presidency was temporary. The worse news: the caravan crowd could potentially swell November apprehensions beyond anything we’ve seen before. 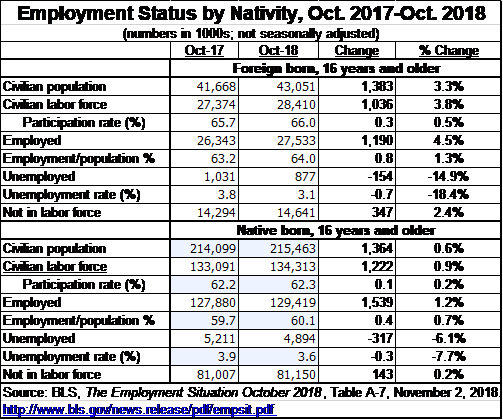 Over the long haul, only legislation, including a border wall to stop the illegal alien flow; a second Operation Wetback and E-Verify, to get the illegal alien self-deporting; and above all, a moratorium on legal immigration, can secure the fruits of the current economic expansion for Americans.