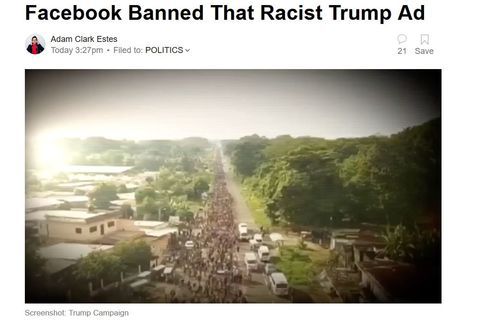 This is an ad from the Republican midterm campaign, not yet banned from Twitter or YouTube, and promoted by the President of the United States. But it's banned by Facebook, NBC, and FoxNews.

Here's technonerd website Gizmodo talking about how they hate it:

Don’t freak out, but the Trump campaign made a super racist television ad and successfully showed it to millions of people. Facebook just banned it, following similar bans from NBC and Fox News. (Fox News!) Election day is Tuesday.

The ad in question deals with the so-called caravan of Central American refugees seeking asylum. It portrays a group of anxious mothers and children as an army of vindictive murders. It’s also a distillation of the worst parts of the Trump presidency, and the Republicans’ message that immigrants present a violent threat to national security, despite the fact that data shows immigrants commit crimes at a lower rate than native-born Americans.

The 30-second primetime ad, which NBC regretfully aired during an especially frothy edition of Sunday Night football, attempts to connect Luis Bracamontes, an undocumented Mexican immigrant convicted of murdering two Sacramento sheriff’s deputies in 2014, to the caravan currently traveling north from Central America. It’s worth pointing out here that the year is 2018. Bracamontes’ crimes took places nearly half a decade ago and have no connection to the refugees currently traveling north. Nevertheless, President Trump shared a longer version of the ad on Twitter last week, and presumably spent a dreadful amount of money to air a similar message on Sunday night. Again, NBC took the money and aired the ad. Facebook did too, but now it says the ad was approved in error. [More]

Most what I've emphasized above is a pack of lies, but the real point you need to remember is that this ad, like the Willie Horton ad, is not about the minority murderer, but about the Democrats whose policies make them complicit in the crimes.

Michael Dukakis let black murderer Willie Horton out, the Obama Administration let Luis Bracamontes in.The ad is not about the criminals, it's about the Democrats.