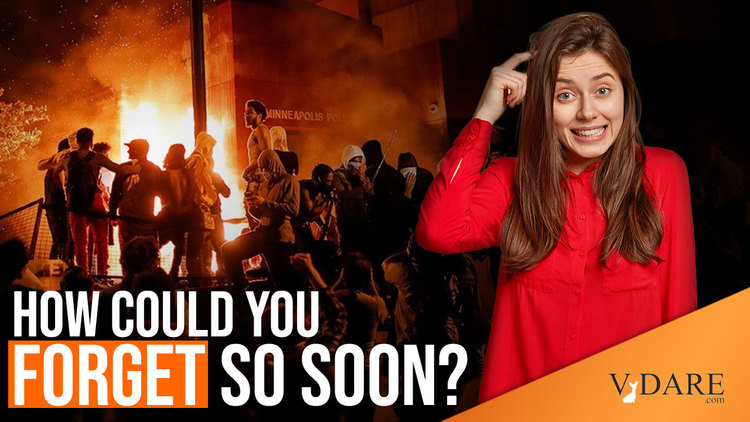 Michelle Malkin: Amnesia of the Anarcho-Tyrannists

Is it just me or has the entire universe of establishment media, politics and Hollywood forgotten that this country has endured an entire year of relentless violent anarchotyranny?

Antifa and Black Lives Matter rioters set businesses and churches ablaze, smashed state capitols and laid siege to federal courthouses. They permanently destroyed precious statues and symbols of America's heritage. They assaulted elderly people, stalked and menaced bystanders, taunted and terrorized law enforcement. And they committed murder—dozens of times—in the name of social justice while the powers that be sat idly by.

How conveniently they have all forgotten the grief of Ann Dorn, widow of retired St. Louis police captain David Dorn, who was slain by George Floyd vigilantes looting a pawn shop he was guarding on June 2, 2020. Ann Dorn condemned the violence during a speech to the Republican National Convention last summer and recounted how she relives "that horror in my mind every single day. My hope is that having you relive it with me now will help shake this country from this nightmare we're witnessing in our cities" and "bring about positive, peaceful change."

Dorn's plea went unheeded. Why? Because riots and invasive protest are the primary means by which the left operates and has always operated.

When they take over government buildings, like 40,000 Democratic union workers did when they stormed Wisconsin's state capitol in 2011 for nearly a month, it's not an insurrection. It's a First Amendment celebration.

When they take over U.S. Senators' offices, like they did during the 2018 Kavanaugh confirmation hearings, it's not sedition. It's "democracy."

When they feel like blocking traffic and shutting down highways, the police don't arrest them. They protect them.

And when they occupy U.S. Immigration and Customs Enforcement facilities and vandalize federal courthouses—while obstructing homeland security operations, shining lasers in cops' eyes to blind them and hurling bricks at them to maim them—it's not a crime. It's "peaceful protest."

This is not "whataboutism." It's an absolutely necessary and vital backdrop as we seek to make sense of what happened last week in our nation's Capitol. (And isn't it the Left that always urges us to identify "root causes" when their thugs cross the line?) Law-abiding Americans are angry and frustrated precisely because the law has not been equally applied.

Whether we're talking about lockdown rules or mob rules or election rules, the elites and their allies live by one set of rules and govern by another. Hundreds of thousands of peaceful Donald Trump supporters are being smeared by pundits and politicians who have downplayed left-wing lawlessness from Day One of the Trump presidency. Those who protest this injustice are being purged from social media and the public square at warp speed:

Maxine Waters has been cribbing Martin Luther King Jr.'s line about riots being the "language of the unheard" ever since she danced on the ashes of the L.A. riots with Bloods and Crips.

Liberal magazine Slate declared just six months ago in defense of antifa and BLM anarchotyrannists that "non-violence is an important tool for protests, but so is violence."

There simply cannot be peace and civil order in such a dysfunctional country of double standards and stifled dissent. It is dishonest and harmful to our republic to pretend otherwise.