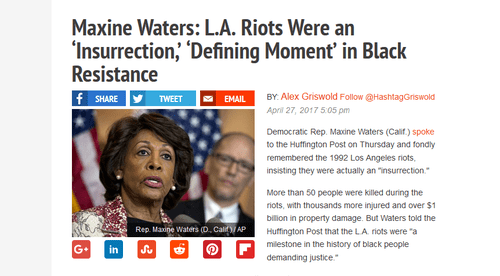 Maxine Walters, Who's Egging On The Attacks On Trump Officials, Also Supported The 1992 Riots That Killed 50 People

A reminder that over 25 years ago, Maxine Waters also supported the Rodney King Riots, and still does.

Democratic Rep. Maxine Waters (Calif.) spoke to the Huffington Post on Thursday and fondly remembered the 1992 Los Angeles riots, insisting they were actually an "insurrection."

More than 50 people were killed during the riots, with thousands more injured and over $1 billion in property damage. But Waters told the Huffington Post that the L.A. riots were "a milestone in the history of black people demanding justice."

"These were people who had been basically forgotten," Waters said. "And because of Rodney King's beating and the current emotion that was stirring in that, it was like people were saying, ‘We're here. You can't do this to us. Look what you're doing, look how you've been.'"

Waters' history of calling the riots an "insurrection" dates back to the riots themselves.

"What I tried to do was take it out of the discussion of ‘these are just no good, crazy rioting people' and to talk about what I call an insurrection, which made a lot of white people mad," she recalled.[ More]

Here's Maxine and the Black Caucus at the time, reacting to the acquittal of police officers who had been charged with "assault with a weapon" after using their nightsticks to subdue Rodney King, who had attacked them:

And here's Maxine leading locals in the riot-torn area to get their welfare checks, delayed because the neighborhood was (a) riotous and (b) at least partly on fire.

A note about those riots, which happened during the George H. W. Bush administration.

Peter Brimelow’s Time To Rethink Immigration, published two months after the riots, ends with the following quote as a postscript:

"At a Cabinet meeting today, Attorney General William P. Barr said nearly one-third of the first 6,000 [Los Angeles] riot suspects arrested and processed through the court system were illegal aliens, according to a senior Administration official. Barr has not proposed any special effort to have them deported, a Justice Department spokesman said."
—Washington Post, May 6, 1992

Now that there's rioting (excuse me, "demonstrations") against Jeff Sessions in Los Angeles, perhaps we can hope for something better.