I do not have enough guffaws to give.

This new spokesmodel for civility and clean government has stoked division and exploited taxpayers for decades.

Change agent? She has served on the Democratic National Committee since 1980—when the Atari 2600 was cutting-edge, Kim Kardashian was a newborn, and Al Franken was hamming it up on "Saturday Night Live."

Waters has spent 37 years in office—many of those years as head of the Congressional Black Caucus—promising to make life better for constituents in economically ravaged South Central Los Angeles.

What do the denizens of her district have to show for it? Staggering levels of persistent unemployment, poverty and gang violence as the 25th anniversary of the L.A. riots looms this coming weekend.

What does Rep. Waters have to show for it?

I covered Waters in the early 1990s as an editorial writer and columnist at the Los Angeles Daily News. Her federally funded Maxine Waters Employment Preparation Center was a gang-infested boondoggle. 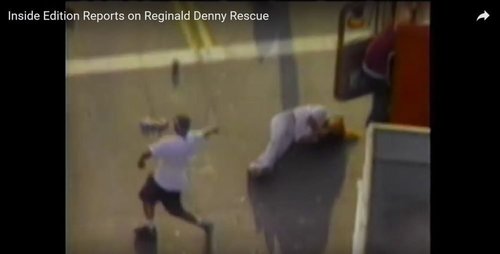 She embraced Damian Williams, the infamous thug who hurled a chunk of concrete at white truck driver Reginald Denny and performed a victory dance over the bloodied innocent bystander.

And she and her family personally profited from her rise to racially demagogic power.

She owns a tony mansion in predominantly white Hancock Park, several miles outside her congressional district.

She secured an ambassadorship to the Bahamas for her husband, a former pro football player and car salesman whose main qualification was having traveled to the island for a vacation.

Her daughter, Karen, has scooped up nearly $650,000 in payments from Mama Waters' slate mailer operation for her federal campaign committee since 2006, the Washington Free Beacon reported this week. And Mama Waters owes her well-heeled daughter an additional $108,000.

And she walked away with a slap on the wrist from the toothless House Ethics Committee in 2012 after being charged with multiple ethics violations related to her meddling in minority-owned OneUnited Bank.

Reminder for all the new fangirls and fanboys suffering from Maxi-mnesia: Her husband, Sidney, was an investor in one of the banks that merged into OneUnited. As stockholders, they profited handsomely from their relationship with the bank.

It was a mutually beneficial relationship. After Waters' office personally intervened and lobbied the Treasury Department in 2008, OneUnited received $12 million in federal TARP bailout money—despite another government agency concluding that the bank operated "without effective underwriting standards" and engaged "in speculative investment practices." After the federal bailout of Fannie/Freddie, OneUnited's stock in the government-sponsored enterprises plunged to a value estimated at less than $5 million. Only through Waters' intervention was OneUnited able to secure an emergency meeting with the Treasury and then-Secretary Henry Paulson.

Tom Fitton, Judicial Watch president, reported that Waters' friend and fellow California Democratic Rep. Zoe Lofgren helped delay her scheduled 2010 House ethics trial on the matter by stalling subpoenas and improperly firing two attorneys working on the investigation. Six of 10 House Ethics panel members quit the case in 2012 over questions about their partiality. An outside investigator absolved Waters of any wrongdoing.

The newfound Maxine Waters Fan Club might want to know that Waters' government cronyism and self-dealing earned her a "Most Corrupt member of Congress" designation from the left-wing Citizens for Responsibility and Ethics in Washington five times—in 2005, 2006, 2009, 2011 and 2017.

Now, Muddy Maxine is leading the charge to drain the swamp that sustains her. What a riot.