Rotherham Rape Scandal "Tip Of Iceberg"—BNP, Like It Or Not, Vindicated 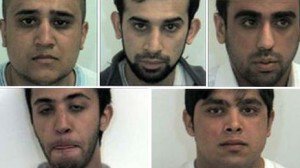 Five of the  men convicted in the Rotherham "grooming" scandal

The British political class is engaging in frantic damage control after the revelation that some 1400 white British girls were systematically “groomed” and sexually assaulted by Pakistani immigrants and their descendants in the northern town of Rotherham, Yorkshire, population just 250,000, over a period of 20 years. What is especially inconvenient is that this revelation isn’t new at all—but a scandal exposed by Nick Griffin and the British National Party a decade ago and deliberately concealed by “anti-racist” policies. And, incredibly, the British government actually prosecuted Griffin for talking about the issue—even as government workers were treating sexual assault and rape victims with indifference and contempt.

Thus The Guardian, the leading Leftist newspaper, has editorialized that there is “no excuse” for institutionalized sex abuse, but “in that context it is understandable that the Labour council was sensitive to the reputation of its Muslim community.” [The Guardian view on the Rotherham child abuse scandal: no excuse, Editorial, August 27, 2014. Emphasis added].

“That context” was signs of resistance from members of the historic English nation living in Rotherham. The Guardian disapprovingly noted that in last May’s elections, “Ukip won most votes and became the official opposition on the council” and “A march by the English Defence League during the campaign drew 500 supporters.” Worst of all, “one of the first on Twitter with a gloating tweet [about the scandal] was Nick Griffin of the BNP.”

The Guardian did not expand on why Griffin was “gloating,” but linked to Griffin’s tweet that stated, “1,400 grooming victims in Rotherham alone! If they'd listened to me & Marlene Guest in 2004.”

American publications, already notably reluctant to report Rotherham, seem to accept that the worst part of the story is that people might conclude the Right has a point. For example, VICE magazine, founded as an iconoclastic voice by occasional VDARE.com contributor Gavin McInnes but now simply peddling Politically Correct propaganda with swearing mixed in to make it edgy, ran a piece English Fascists Have Descended on Rotherham’s Sex Abuse Scandal[September 4, 2014]. Reporter Ed Temple abandoned VICE’s usual snark to intone piously that “there needs to be a more serious, probing exploration of why Asian gangs have been able to abuse girls and boys”—but was quick to add that “the “EDL, Britain First, National Front and BNP aren't helping that discussion take place.”

There’s article after article attacking the BNP for exploiting this tragedy, yet none of these pieces acknowledge that leaders of the BNP not only were sounding the alarm over the grooming, but that its leaders were prosecuted for “inciting racial hated” for the efforts.

Here’s the back story.

In 2004, the BBC’s Channel Four aired a documentary called Edge of the City, documenting the lives of social workers in Keighley, another Yorkshire town about fifty miles from Rotherham, which reported “grooming.” As The Guardian reported at the time:

What emerges from these women's account, and from the testimony of two girls, one of them currently being groomed, is disturbing. Men from Bradford's Asian community, they claim, are targeting girls from 11 or 12 years up, taking them out in their cars, and giving them alcohol and gifts. The girls are flattered into believing that the men love them. Subsequently, they might be given heroin and crack cocaine and date-rape drugs, raped vaginally and anally, and in some cases, abducted and gang-raped.

According to Hall's film, the Keighley social services office has recorded 50 to 70 possible cases of grooming, while the children's charity Barnardo's currently has 15 projects working with young people across the UK who have been abused. But what struck Hall about the cases she found in Bradford and Keighley was that "blatant abuse was going on under people's noses, and no one seemed able to prevent it”.

Prior to the making of the Edge of the City, the BNP had been publicizing these crimes. Naturally, the BNP promoted the documentary, or, as the The Guardian put it, “hijacked the film.” To various minority and “anti-racist” groups, the BNP was a bigger problem than child rape, so they successfully pressured the BBC to pull the film, just hours before it was due to be broadcast, out of fears of “racial violence.”

Channel 4 needless to say said politics nothing to do with the decision, but the Daily Telegraph noted,

The pressure group Unite Against Fascism has expressed fears that the allegations could serve as a recruitment video for the extreme Right. The BNP's website has been urging supporters to watch the programme, describing it as “the first of two BNP political broadcasts.”

Sabby Dhalu, joint secretary of Unite Against Fascism, said:“It is particularly dangerous to show this programme before the elections, so we welcome Channel 4's decision. But it is likely to whip up racism whenever it is shown and the BNP will seek to capitalise on it."

The BBC only ran the film in August 2004—after the local and European elections.

However, the BBC had no compunction about releasing another politically fraught documentary before the 2004 elections: The Secret Agent, in which undercover reporter Jason Gwynne surreptitiously recorded conversations and speeches of BNP members and leaders. Going undercover in the BNP , BBC, July 15, 2004,

One of the recordings was a private speech by Nick Griffin in Keighley in which the BNP leader specifically discussed “grooming.” Griffin said:

This town should be on everyone's lips as the place where those pedophile drug rapes went on, because sixty of our children, one is too many, but sixty is a massive rape wave.[YouTube ]

The first is our police force and our elected governors haven't done a damn thing properly about it, and the second is that their [Muslims’] good book tells them that that's acceptable.

Griffin ominously observed: “Now that sentence could get me seven years in prison.” He said that he would not drone on about the Koran but said you could find passages in the Koran that “you can take any woman you want as long as they’re not Muslim women...any women they can take by force or guile is theirs.” He noted then called Islam a “wicked vicious faith.”

The enterprising “reporter” Gwynne says [YouTube]: “I showed a senior barrister my footage. He said that Griffin’s words are 'threatening, abusive, or insulting' and...designed to 'stir up racial hatred' a crime under Section 18 of the Public Order Act...the maximum sentence is 7 years in prison.”

Griffin was prescient—not just about what Muslim immigrants were doing to English children, but how the British government would respond. He was arrested in his home at dawn just before Christmas 2004 and prosecuted for his words. [Then They Came For Nick Griffin, by James Fulford, VDARE.com, December 14, 2004]

Based on Griffin’s speeches at Keighley and elsewhere, prosecutor Rodney Jameson QC, who’s since become a Judge, said:

“The prosecution allege that each of the six speeches ... included words which were threatening, abusive and insulting towards, in particular, people of Asian ethnicity. Such words were used with the intention of stirring up racial hatred.”

This prosecution of the leader of a legal British political party for exercising freedom of speech received almost no coverage in US media—including in Conservatism, Inc. outlets. [Nick Griffin, The U.K. Government, And The U.S. Media Blackout, By James Fulford, February 2, 2006]

The irony that this entirely truthful statement landed Griffin in court is of course bitter. And, remember, what Griffin said was known to be true at the time. The allegation about the rapes and official indifference is beyond dispute. While the 1,400 victims in Rotherham are the main news, the controversy has finally prompted officials to arrest 28 “men” in Keighley for grooming [28 men arrested in Keighley grooming gang probe, by Steve Wright, Bradford Telegraph & Argus, September 1, 2014. Note the story is illustrated with a picture of white hands in handcuffs]

But, to paraphrase Stephen Colbert: “Reality has a well-known racist bias.” Truth is no defense against crimethink in the UK. Griffin was lucky to be eventually acquitted by a jury. [Nick Griffin Acquitted in British Hate Speech Trial, By James Fulford on November 11, 2006]

Nick Griffin and the BNP may have had flaws, but they were willing to speak out against this atrocity while the BBC and the political establishment tried to cover it up and criminalize anyone who spoke the truth.

This scandal is only going to get bigger. (Islamic Rape Gangs: Rotherham Is Just The Tip Of The Iceberg, by James Delingpole, Brietbart.com, September 7, 2014.).

To the extent that the BNP will benefit from/“exploit” the culpability of the British political class, it will be well deserved.