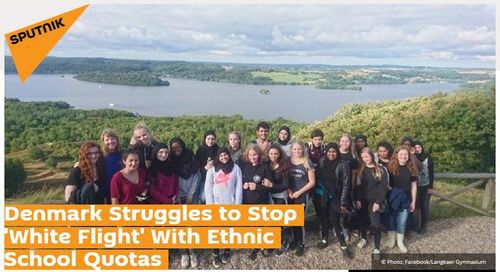 Denmark: Can The “Silent Carriage” Survive?

In some European countries there are “quiet” carriages on long-distance trains. This means that you talk at a low volume and ensure that nobody can hear the music from your iPod. But this isn’t good enough for the Danes. In long-distance trains in Denmark, you will find there is a “silent carriage.” And this means silence—no talking. Of course, the so-called “New Danes” seem to have a problem understanding this. But unlike in neighbouring Sweden, the Danes aren’t afraid to demand that these recently-boarded passengers follow the carriage’s rules or go and sit somewhere else—for now.

Danish culture is unusual. On the one hand, it’s a country of less than six million people, meaning it has the sense of small-nation nationalism and conformity that you get throughout Scandinavia: Higher socioeconomic equality even compared to other Nordic countries— over 75% of Danes are paid up members of the Lutheran Church and they strongly celebrate peasant-culture rituals such as Midsummer and May Day.

But on the other hand, Danes seem to have the kind of love for their history that you find in ex-coloniser nations: the preservation of old buildings, a strong sense of their own superiority to “peasant” peoples like the Norwegians, a national self-confidence: reportedly they are the happiest people in the world .

In some ways, Denmark is the England of Scandinavia.

As with England, recent history has been little more than a long decline. In the mid-sixteenth century, Denmark’s monarch ruled over the Kalmar Union, which included Sweden and Finland, Norway, Iceland, the Faroe Islands, Greenland, and parts of Estonia and northern Germany. By the early nineteenth century, however, after a series of wars, it had lost everything except the Faroe Islands, Iceland and Greenland, though it did now have colonial possessions in India, Ghana, and the West Indies.

Danish people voted with their feet and left the declining power for the USA. And by 1944, the now-Nazi-occupied state had lost all of its colonial possessions and, most humiliatingly of all, Iceland had declared independence. A few years later the Faroe Islands got home rule and by 1979 even Greenland had set up its own parliament. Surely Denmark’s humiliation was complete.

But it wasn’t. Gradually it started to lose parts of Denmark itself, due to the same short-sighted immigration policies that ravaged Western Europe in the 1960s. This homogenous country (apart from a few Inuit and Germans on the border) now welcomed large numbers of “guest workers,” most of them from Turkey and Pakistan.

The Danish government sensibly halted non-European immigration in the impoverished 1970s. But it was too late. “Family reunification,” combined with the propensity of “New Danes” to lie about who their relatives were, meant that the non-European, non-Christian, population simply grew and grew.

Of course, these people had no intention whatsoever of integrating into Denmark’s haram culture of Christmas ham, silence even during the day, and relative female equality. And the superb standards of English spoken in Denmark, even 40 years ago, meant there was little incentive to learn Danish either. As early as 1973, the government had to pass a law to force guest workers to attend 40 hours of Danish language classes . After all, only a thousand years ago, English and Danish were mutually intelligible [Language and History in Viking Age England: Linguistic Relations between Speakers of Old Norse and Old English, Matthew Townend 2002], like Danish and southern Swedish today.

From the 1980s onwards the now-wealthy country was simply flooded with Third World “refugees” and economic migrants. In 1980 alone, 50,000 Third World immigrants were living in Denmark: 1% of the population. By 2012, it was 300,000 “New Danes”—and that doesn’t include the children or grandchildren of earlier immigrants, whom the government insist on counting as Danes in order to play down what’s happening.

As of 2012, immigrants in Denmark—again meaning only those born abroad—have 1.8 children, compared to 1.69 for “ethnic Danes,” which means the differential is considerably higher. No official figure is available on how many “Danes” are still “Danish,” because a native Dane is legally defined as having at least one parent born in Denmark. On this basis, the non-Danish population is about 14% , so we can safely infer that it’s higher.

And that means the “silent” carriage is increasingly a thing of the past—especially in Denmark’s larger cities.

Where the Danes have the standard European IQ of 100, it is 86 for the New Danes.[Predicting Immigrant IQ from their Countries of Origin, and Lynn’s National IQs: A Case Study from Denmark, by Emil Kirkegaard, Mankind Quarterly, Spring 2013.]. And the less intelligent and more Islamic their country of origin, the more criminal they are within Denmark and, worryingly for the future, the more children they have as well [Criminality and fertility among Danish immigrant population, by Emil Kirkegaard, Open Differential Psychology, March 14, 2014].

Muslim Ghettos are simply a fact of life in Denmark. The government has even provided them with a five-criteria legal definition, which includes the criterion that at least 50% of the population are immigrants or their descendants.

Copenhagen’s main synagogue, situated in just such a ghetto, was attacked in 2015, after which it had 24-hour police protection [Jewish guard dead, two police wounded in shooting at Copenhagen synagogue , YNet, February 15, 2015.]. In 2016, an Aarhus area school—which had gone from 25% to 80% non-Danish in under ten years—was shamed in the MSM for trying to introduce ethnic quotas [Denmark Struggles to Stop 'White Flight' With Ethnic School Quotas, Sputnik, September 9, 2016].

In 1998, the government tried to deal with this ghetto problem by dispersing immigrants all over the country [Liebig, Thomas (March 5, 2007). "The Labor Market Integration of Immigrants in Denmark" (PDF). OECD Social, Employment, and Migration Working Papers] This not only means that there’s no getting away from “enrichment”—Americans will henceforth run into hijab-wearing Somalis and their broods in small rural towns—but these “migrants” are even more likely to be unemployed, because there are no jobs in such places even for native Danes.

The result is the same as it has been elsewhere in Scandinavia: a massive immigrant crime wave—immigrants and their descendants have an age-controlled crime rate that is two and a half times higher than that of the Danes—especially for gang rape. The number of rapes in Copenhagen doubled between 2014 and 2016 [Reports of rape increase dramatically in Copenhagen, January 28th, 2016].

The Danish Main Stream Media routinely censor their reports so that the ethnic and religious origins of rapists and other criminals and unclear. And they almost never report the names of those convicted. But Danes have become adept at reading between the lines: the rape was committed by a “youth” living in area that’s 80% non-Danish, the rapist spoke Danish with a “foreign accent,” or spoke “English” etc.

In May 2018, a 33 year old male nurse in a Copenhagen hospital was found guilty of having raped a semi-conscious, heavily intoxicated female patient. In his defence he said he had been “tempted” by her [Danish News in Brief: Hospital rape victim was literally paralytic but fully conscious, by Ben Hamilton, CPHPost, May 7th, 2018]. I suppose he could have been a deeply religious Lutheran.

The Danes, however, have a very strong tradition of free speech, much more so than other Nordic countries. In 2005, Denmark’s largest newspaper published a series of Mohammed cartoons, leading to deadly riots around the world. The newspaper was investigated to see whether it could be prosecuted for breaking Danish laws against “ridiculing minorities in Denmark or dogmas of worship,” but the investigation was dropped, seemingly under public pressure . Until the year 2000, when the editor was forced out, the newspaper Ektrabladet conducted a brilliantly titled anti-immigration campaign called “The Price of Goodness,” stressing all the ways that immigration was destroying all that is good about Denmark. [The Danish Exception, by Martin Lund, American Renaissance, December 1, 2017]

Since the 1970s, the right-wing, libertarian Progress Party had had seats in Denmark’s pure Proportional Representation parliament. From the 1980s, it had adopted an anti-immigration stance. But by 1995 it was mired in scandal, resulting in a breakaway party—the Danish People’s Party (DPP)—led by a then 48 year old former office assistant Pia Kjærsgaard . In 1998, the DPP won 7% of the vote. And then in 2001, it garnered 12%, making it the third-largest party.

Going into coalition with two mainstream conservative parties, the Danish People’s Party managed to achieve, in 2002, Europe’s strictest immigration policy . Incredibly, this involved nothing more than simply following the Geneva Convention: no asylum on “humanitarian” (refugee is in no danger, just poor) grounds (promptly cutting refugee numbers by 60%); accepting only the bare minimum required by the convention; and cutting benefits for immigrants by 40% during their first 7 years in the country.

Also, no foreign spouse to be brought into the country unless both members of the couple were over 24, the Danish partner has been in full employment for the last twelve months, they could lodge a bond of $9,300 with the government, and could provide at least 20 square metres of space in his home for the spouse.

And no foreign spouse to be brought in at all if the Danish citizen is viewed to have stronger links with another country than Denmark.

Having taken 31% of Scandinavian asylum applications in the year 2000, by 2003 Denmark took 9% of where Sweden took 60% and Norway 31%. “New Danes” fled across the Oeresund Bridge to Sweden. Sweden strongly protested. But Pia Kjaersgaard didn’t mince her words:

If they want to turn Stockholm, Gothenburg or Malmo into a Scandinavian Beirut, with clan wars, honour killings and gang rapes, let them do it. We can always put a barrier on the Oeresund Bridge,” [Denmark's Immigration Issue, BBC, February 19, 2005].

In 2005 and 2007 the DPP modestly increased its parliamentary representation, with 13.9% of the vote. It fell back in 2011 when a Leftist government took power..

But in 2015, it was back with a vengeance. Under a new leader, the DPP took 22% of the vote, making it the second largest party. The Social Democrats received the largest vote share but couldn’t form a coalition and went into opposition. The third-largest party, the mainstream conservatives known as Venstre (“Left”—how things change!) couldn’t form a coalition either, as they wouldn’t accept the DPP’s demands for even stricter immigration laws and the re-establishment of Denmark’s borders: you can cross from Germany or Sweden without any checks.

Venstre, on 19% of the vote, set up a chaotic minority government  which lasted until 2016 when it was forced to bring in the DPP.

We will see whether there is further progress for the Danish People’s Party. But they’ve had a massive influence.

In 2015, even stricter immigration rules were introduced. The result: the percentage of new Danish citizenships granted in 2016 fell from 81% Muslim to 70% .

In May 2018, Denmark’s (Venstre, not even DPP!) immigration minister, Inger Stoejberg, declared that the Ramadan fast was “dangerous for us all.” It affected work safety and those who wished to follow it, especially bus drivers and hospital workers, should stay off work, using their holiday entitlement . And she recently republished a cartoon of the Prophet Mohammed .

The DPP is now demanding that only 1000 Danish citizenships be granted annually .

Clearly a growing minority of Danes have understood that, just as they fought Nazi occupation, they now have to fight for the preservation of their “silent” carriages.

But unless Danes tighten their immigration policies even further, they will have to get used to the noise.