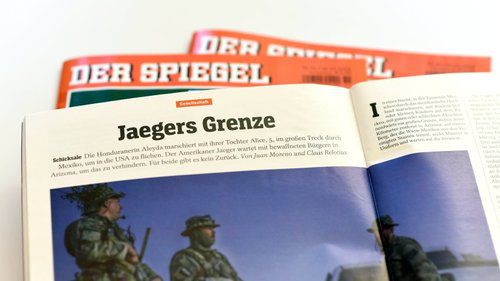 The term "Lügenpresse" is something of a slur, used by the "far right." But "lying press" is the only correct term to use in this case, as an award winning reporter for Der Spiegel has been revealed as a fraud. Similar to the case of Jayson Blair at The New York Times, one suspects that Claas Relotius got away with it for so long precisely because the stories he told are ones liberals wanted to believe.

In fact, the story that proved his undoing was a piece on a "vigilante group" that patrols the southern border. One suspects it was a hit piece, but the article has since been scrubbed.

The first suspicions emerged following the publication in November 2018 of the article "Jaeger's Border" about an American vigilante group that patrols the border between Mexico and the United States.

Juan Moreno, who reported the story together with Relotius for DER SPIEGEL, grew distrustful of his colleague. Moreno also reported his concerns to DER SPIEGEL. He didn't relent, and he took advantage of a trip to the U.S. for reporting on another story to gather incriminating information about Relotius -- and also in order to take steps to protect himself, given that his byline had also appeared on the article.

After initially denying the allegations, Relotius finally confessed at the end of last week. It has emerged that he invented entire passages -- not only in the article "Jaegers border," but also in a number of other articles.

[Answers to the most important questions, Der Spiegel, December 19, 2018]

In another case, Relotius wrote a hit piece against a conservative community to make them seem like racist rubes.

Another of his fabricated stories was his report on the town of Fergus Falls, Minnesota entitled, "Where they pray for Trump on Sundays." In his attempt to apparently make the town's citizens seem racist and sexist, Relotius even made up people that didn't actually exist.

What Relotius produced were "endless pages of an insulting, if not hilarious, excuse for journalism,” according to investigators.

Needless to say, such stories won him praise from his comrades, er, colleagues. Relotius was once honored as CNN's "Journalist Of The Year".[CNN's 2014 Journalist of the Year resigns after admitting to falsifying stories, by Mike Brest, Daily Caller, December 19, 2018]

And so he is. He is truly an exemplar of their entire class.