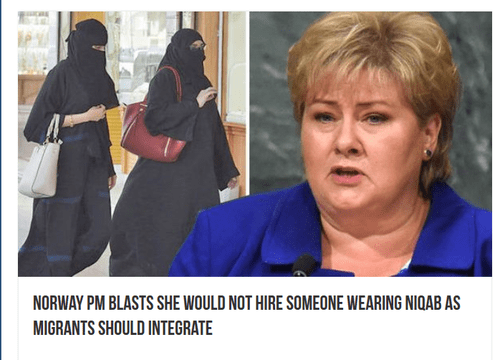 Norwegians have a sense of self-confidence that their Scandinavian neighbours can hardly dream of. Their gerrymandered close relationship with the European Union, and their elite’s fervent advocacy of Multiculturalism, has clearly rocked the nation of 5.5 million, but the damage is nowhere near as severe as it could be. The descendants of the Vikings simply won’t be pushed around to the same extent as the Finns or the Swedes.

Following the “Nordic Model,” Norwegians pay very high taxes in return for being looked after from the cradle to the grave: free higher education, free care for the elderly, even income-related fines for traffic violations. Which means that the living standards of a doctor are not much different from those of a bus driver. But the Norwegians have a very high level of genetic homogeneity, even more so than Finland. They’re basically an extended family [Nationwide Genomic Study in Denmark Reveals Remarkable Population Homogeneity, Athanasiadis et al., Genetics,  August 17, 2016] so they seem to like this equality. Assuming you don’t want to get rich, Norway is, by most measures, an excellent place to live—the fifth largest per capita producer of oil in the world , with the 7th highest per capita income in the world , It’s the most economically equal country on Earth (which suggests little social resentment) and it is also the most democratic, the least corrupt, one of the happiest, and the most developed country, according to the OECD .

Needless to say, Norway’s elite, is doing everything they can to wreck this. But there’s something about the Norwegians: you can only push them so far.

By 1905, Sweden, Norway’s colonial master, was an increasingly authoritarian monarchy. It was even making alliances with the German Kaiser, an even stronger authoritarian. So the Norwegian regional parliament declared independence, effectively allied with (democratic) Britain, and invited a Danish prince, who took the Norwegian name Haakon, to be their king.

After World War II, and a Nazi-allied government under Vidkun Quisling, the country became dominated by Labour Party (the country has Proportional Representation, so there are usually coalitions) which developed its welfare state. To Labour’s credit, poverty was massively reduced in Norway during this period

However, by 1972, the elite—Labour and Conservative—simply weren’t on the same page as the self-confident Norwegian people. The Norwegian parliament voted overwhelmingly to join the EU—and effectively give-up Norwegian independence—but, unlike in Britain, this decision had to be put to the Norwegians in a referendum. In a fascinating foreshadowing of Brexit, 53% of Norwegians rejected what their elite wanted. Utterly humiliated, the Labour government resigned.

In 1994, another Labour-led government, under Gro Harlem Brundtland (she combines her maiden name with her husband’s surname), betrayed this result by joining in the so-called European Economic Area (EEA). This, in effect, twilight zone between independence and EU membership means that Norway is subject to 21% of EU Laws, 70% of EU directives (the unelected EU leaders simply decree a new rule), and 17% of EU Regulations.

She persuaded parliament, once again, to vote to join the EU. But, once again, 52% of Norwegians voted to stay out. Currently, 66% of the population oppose joining .

But, this time, it was hollow victory for the Norwegian spirit of defiance. As a member of the EEA, Norway had to take “refugees” and other immigrants. The slow death of Norway had begun. The parents of the speakers of so-called ‘Kebab Norwegian’ arrived from the Middle East in droves. 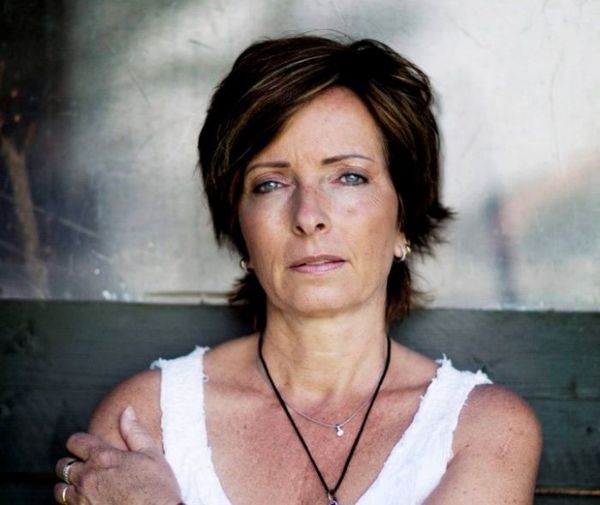 Historically, rape was incredibly rare in Norway. But the Islamic rape-wave began slowly but surely. 100% (!) of rapes committed in Oslo between 2005 and 2010 were by what the police called “men with a non-Western origin” (code for Muslim).

In announcing this inconvenient fact, however, Inspector Hanne Kristin Rodhe (pictured right) attempted to explain it:

the perpetrators often are unemployed, have been asylum-seekers during the last five years and come from a traumatized environment . . . their perception of women can be one of the motives behind the rapes.

On a single Saturday night in 2011, 4 Norwegian women were raped in Oslo, all of them by men who spoke “broken English, broken Norwegian or both” (i.e. Muslims). [All reported rapes in Oslo by foreigners, by Andrew Bolt, Herald Sun, June 1, 2011,

But such is the insanity of some members of the Norwegian Left that they accept this even it happens to them personally. Thus “anti-racist”’ male Karsten Nordal Hauken was raped by a Muslim asylum seeker but reported feeling “guilty” about the rapist being deported after serving his prison sentence. [Norwegian rape survivor 'feels guilty' the man who assaulted him was deported, by Will Worley, Independent February 8, 2011]

The website ‘Save Our Sweden’ has painstakingly documented, in English, what is happening to its neighbour. By 2016, over 5% of the Norwegian population were Muslim, not including asylum-seekers yet to be regularised. In the same year, the chief of Oslo Police declared that the Norwegians had essentially “lost the city.” The Grønlund district, in particular, is little more than a Muslim caliphate. There are Sharia patrols and drugs are openly sold in the street.

On New Year’s Eve 2006, a young Norwegian woman was walking, alone, through Grønlund at 4 a.m., something that never used to be remotely dangerous. CCTV caught footage that showed a Muslim run up behind her, push to the ground, grab her by the throat and rape her. [Oslo Police Declare “We Have Lost the City”…Islam Has Taken Over, SaveMySweden, March 24, 2016]

Since then, the Norwegians have gradually migrated out of to safely.

And then there’s the cultural indoctrination by those who have marched through Norway’s institutions. In November 2017, a school in Skien announced that children would be reading Koran verses at the Christmas assembly. [Norway school includes Koran verses in Christmas Program, SaveMySweden, November 28, 2017]

But Norwegians quickly saw through their government’s propaganda. As early as the 1997 parliamentary elections the Progress Party, which advocated stopping immigration and leaving the EEA, got almost 16% of the vote, making it the second biggest party. It reached 23% of the vote in the 2013 election, though fell back to 16% last year, having been part of the government, a member holding the post of Integration Minister.

Infamously, in July 2011, Anders Brevik shot dead 69 members of the Labour Party Youth Group at their gathering on an island, and had intended to assassinate the former Labour Prime Minister, Gro Harlem Brundtland, who had taken Norway into the EEA .

The popularity of the Progress Party has forced the Labour and Conservative Parties to adopt a watered-down version of its programme. In 2016, Integration Minister Sylvi Listhaug (Progress Party) declared it was government policy to ensure that Norway did not ‘become like Sweden’ [We can’t be like Sweden : Norway’s integration minister, SaveMySweden, March 31, 2016.]. Later that year, the Conservative-led government passed a law that any refugee who had not come directly from a warzone would be rejected [Danish Parties envious of Norway’s tough asylum bill, SaveMySweden, April 7, 2016.]. They also declared they would take no more asylum seekers who had crossed the Mediterranean into other EU countries, having previously taken 1500 in a year where Sweden (slightly more than double the population) took over 100,000 [Norway won’t take any more refugees from the EU,  SaveMySweden, April 8, 2016.].

Oslo’s local government, under similar political pressure, has prevented the establishment of a Muslim school in Grønlund [Norway officials reject Muslim school in Oslo, ] while the national government is looking into barring entry to Muslim preachers, puts those already present in internal exile in the middle of nowhere , and is planning to ban the full face veil in schools. The Conservative Prime Minister Erna Solberg has declared that employers shouldn’t hire women who wear the niqab (fell length gown) because wearing it shows a failure to integrate [Norway PM blasts she would NOT hire someone wearing niqab as migrants should integrate, SaveMySweden, October 19, 2016]

The new Norwegian insistence that foreigners must integrate has had some interesting unforeseen consequences. Cultural anthropology is the ultimate example of Leftist dogma dressed up as an academic discipline. Unni Wikan, retired professor of this subject at Oslo University, declared in 2001 that Norwegian women needed to adapt to Middle Eastern culture to avoid being raped. [Mener norske jenter frister til sex, by Mark S. Berger, Dagbladet, September 6,  2001 (Translation)]

A professor in same department, Thomas Hylland Erikson, made it quite clear that he wanted to “deconstruct the majority and make it thorough so that it can never again be called the majority”.[ Håper på fem nye Culcom-år, University of Oslo, June 18, 2008 (Translation) ]

However, when this department advertised for a new lecturer, it was forced by law to make clear that preference would be given to Norwegian and Danish speakers and if the successful applicant needed to speak English then that person would have two years to become completely fluent in Norwegian and start conducting all work through Norwegian. Failure to manage this would be a breach of contract, resulting in dismissal.

The vast majority of countries in Europe have their Thomas Hylland Eriksen. But our own professor had a more difficult task than most. It is not easy to press an analysis model developed for extremely heterogeneous societies down over what until recently was one of the world’s most homogenous states.

This is the problem for Multiculturalists in Norway. Unlike relatively large and authoritarian Sweden , or authoritarian high social anxiety Finland , Norway combines genetic homogeneity, with the self-confidence of small-nation nationalism, lower social anxiety than Finland and a long history of real democracy.

Norway may have lost Oslo. But it might be able to keep the rest of the country Norwegian—as the call to the prayer floats across the Swedish and Finnish borders.