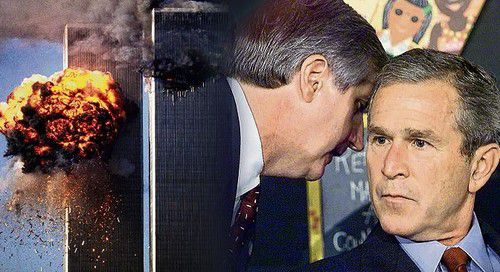 In the debate, Trump mentioned that the attack on the Twin Towers happened during the Bush Administration:

The audience—and Republicans on Twitter, reacted as if this was 9/11 Trutherism. It's not. Bush opposed racial profiling of Arabs on airplanes before and after the attack—as Ann Coulter pointed out just now:

Of course, Ann Coulter was fired by National Review for advocating racial profiling of Arabs after 9/11. See Abolishing the West: Fall of Constantinople, Part II.

The Bush record on Arab racial profiling is something we've been covering here for years.

The first time we mentioned Bush and profiling was in Bore vs. Gush on Racial Profiling, by Steve Sailer, written 11 months before 9/11, about the October 11, 2000 debate between Bush and Gore, in which then-Governor Bush said (emphasis added)

And secondly, there is other forms of racial profiling that goes on in America. Arab-Americans are racially profiled in what’s called secret evidence. People are stopped, and we got to do something about that. My friend, Senator Spencer Abraham of Michigan, is pushing a law to make sure that, you know, Arab-Americans are treated with respect. So racial profiling isn’t just an issue at the local police forces. It’s an issue throughout our society. And as we become a diverse society, we’re going to have to deal with it more and more. I believe though — I believe, sure as I’m sitting here, that most Americans really care. They’re tolerant people. They’re good, tolerant people. It’s the very few that create most of the crisis. And we just happen to have to find them and deal with them.

Click to watch it on YouTube—it should open at 47:28 on the video.

Steve has written about this repeatedly:

More recently, when Trump said something similar in October of last year, Patrick Cleburne wrote here Trump Doubly Correct On Bush And 9/11: His Watch, And He Weakened Arab Airline Screening.

After 9/11, there was an incident in which an Arab member of the the President's Secret Service detail was refused boarding on an airplane, because he didn't quite have the right paperwork he needed to fly with a handgun, and the captain declined to make an exception for an Arab gunman who wanted to see the President.  Bush's reaction:

There's an inquiry going on as to specifically what took place," Bush said. But if he was treated that way because of his ethnicity, that's — that will make me madder than heck." [Bush Upset His Agent Was Booted From Plane, ABC, December 28, 2001]

Apparently no on was willing to ask the obvious question, which I made the headline of an article: Er…Why Does Bush Have An Arab Bodyguard Anyway?. See also The Wall Street Journal And The Arab On The Airplane, about the people who thought that was a terrible thing to say. Be that as it may, it's an example of Bush opposing racial profiling of Arabs after that policy had killed 3, 000 people.