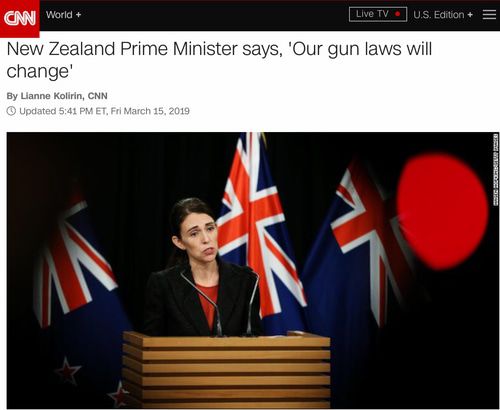 John Derbyshire On Christchurch: Condolences, But Tragedy Is No Excuse For Abolishing Civil Liberties

The headlines as I'm recording here re all about the mass killing in Christchurch, New Zealand.

I render my usual apology for not being able to think of much to say about these occasional sudden acts of homicidal lunacy. There is an irreducible number of people in the world who will do things like this; and short of drastically curtailing the liberties of everybody, the problem doesn't have a solution.

With no offense to those who have suffered and died from these outrages, I cherish my liberty and will take my chances with the very occasional random lunatic in the same spirit of fatalism I bring to my chances with lightning strikes, asteroid impacts, and slippery bathtubs.

I can't stop other people drawing conclusions, though, and a great many people are ready to do so.

"It's Islamophobia," comes the cry. Well, yes, the killer here does seem to have has a special antipathy to Muslims.

There are crazy Muslims with an equal antipathy to infidels, though. Precisely equal in this case: The number of dead in Christchurch was 49, exactly the same as the number killed by Afghan-American Omar Mateen in Orlando, Florida three years ago.

Perhaps settling great numbers of Muslims in non-Muslim nations is a bad idea, stirring up crazy people on both sides.

The gun controllers are howling, too. Again, I'll cherish my liberties, and put up with the accompanying risks—which, from a coldly actuarial point of view, are way down below the struck-by-lightning level of probability.

Not being able to think of much else to say relevant to the public sphere, I'll go private.

The city of Christchurch has some faint but special associations for me. Faint, because I've never been there. I heard all about it, though, from my father.

Dad lived in and around Christchurch in the late 1920s, when he was a footloose young man. My half-brother was actually born in Linwood, the district in Christchurch where one of those mosques stands.

From Dad's reminiscences, I believe those New Zealand years were the happiest of his life. He returned to England in 1930 to deal with a family crisis, got stuck in the Depression, and never found his way back to the Antipodes. He waxed lyrical about New Zealand all through my childhood, to the degree that I made an unsuccessful try at emigrating there.

Dad was a keen tennis player in his youth. He once told me that he'd played the inaugural game at a new-built set of tennis courts somewhere in or near Christchurch, and a commemorative plaque had been put up there with his name on it, among others. I suppose it's pretty unlikely that the plaque—or even the courts themselves—have survived ninety years; but if I have any readers down there in Christchurch, I'd be curious to know.

So in a spirit of filial piety, transmitting my Dad's sad nostalgia, I offer my condolences to the people of Christchurch for such a horrible thing happening in their city, with the faint hope that I shall visit that city one day.