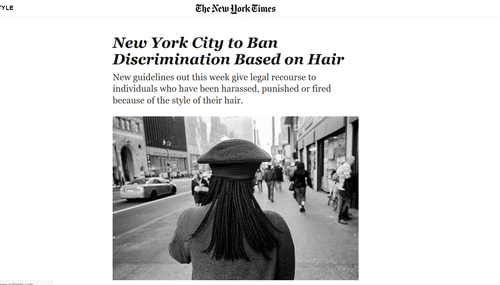 "New York City to Ban Discrimination Based on Hair"

New York City to Ban Discrimination Based on Hair

New guidelines out this week give legal recourse to individuals who have been harassed, punished or fired because of the style of their hair.

Under new guidelines to be released this week by the New York City Commission on Human Rights, the targeting of people based on their hair or hairstyle, at work, school or in public spaces, will now be considered racial discrimination.

The change in law applies to anyone in New York City but is aimed at remedying the disparate treatment of black people; the guidelines specifically mention the right of New Yorkers to maintain their “natural hair, treated or untreated hairstyles such as locs, cornrows, twists, braids, Bantu knots, fades, Afros, and/or the right to keep hair in an uncut or untrimmed state.”

In practice, the guidelines give legal recourse to individuals who have been harassed, threatened, punished, demoted or fired because of the texture or style of their hair. The city commission can levy penalties up to $250,000 on defendants that are found in violation of the guidelines and there is no cap on damages. The commission can also force internal policy changes and rehirings at offending institutions.

The guidelines, obtained by The New York Times before their public release, are believed to be the first of their kind in the country. They are based on the argument that hair is inherent to one’s race (and can be closely associated with “racial, ethnic, or cultural identities”) and is therefore protected under the city’s human rights laws, which outlaw discrimination on the basis of race, gender, national origin, religion and other protected classes. …

In New York, it isn’t difficult to find black women and men who can speak

about how their hair has affected their lives in both subtle and substantial ways, ranging from veiled comments from co-workers to ultimatums from bosses to look “more professional” or find another job. …

Georbina DaRosa, who is interning to be a social worker, had her hair in box braids as she ate lunch with a colleague at Shake Shack on East 86th Street on a recent weekend afternoon. Ms. DaRosa said her hair sometimes elicited “microaggressions” from her superiors at work.

Also, somebody once asked if they could touch a black person’s hair. Under this new NYC regulation, that is a capital crime punishable by lynching.

No mention of discrimination against the bald, of course. Interestingly, there’s a racial angle to that: it’s less unfortunate for a black man to go bald (e.g., Michael Jordan) than for a white man to go bald.