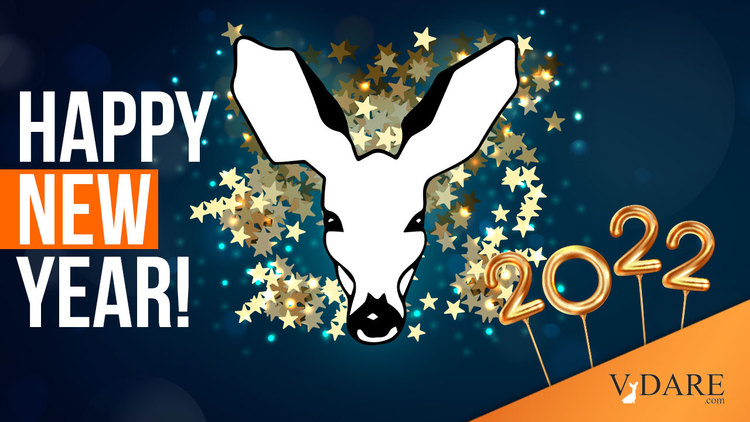 Earlier: We Blew Past Our Goal And The Momentum Hasn't Stopped!

Happy New Year from VDARE.com. John Derbyshire, who filed a Radio Derb on Christmas Eve, has also filed one this New Year's Eve.

"Neither snow nor rain nor heat nor gloom of night" will stop him filing Radio Derb. VDARE.com Editor Peter Brimelow calls it "Stakhanovite."

A number of non-good things happened in 2021, but we won't mention them. One thing that didn't happen in 2021 was an attempted overthrow of the elected government. That is Fake News. (See CAPITOL "INSURRECTION" HOAX: How Our Lying Press Would Have Spun Jan 6 Protest If Trump Were A Democrat [VIDEO].)

Another thing that didn't happen in 2021: Amnesty for illegal aliens. They tried hard, but failed to pass it.

We expect a continued failure to pass Amnesty, because while many Democrats are "Woke," which in many cases means members of what we call a Minority Occupation Government, other Congressional Democrats are seriously interested in getting reelected.

As nonpartisans, we also expect to be keeping a close eye on Republicans who will probably be taking back the House in 2022.

And as VDARE.com Publisher Lydia Brimelow reports above, we blew through our year-end fundraising goals, so thanks to everyone who donated!

We've been here since 1999, and I've said before that we've already outlasted the Weekly Standard, and we may yet outlast the New York Times, the Washington Post, and National Review. With your help, we'll outlast CNN as well.

Lydia Brimelow says of our fundraising goal this year that the "The Momentum Hasn't Stopped!"