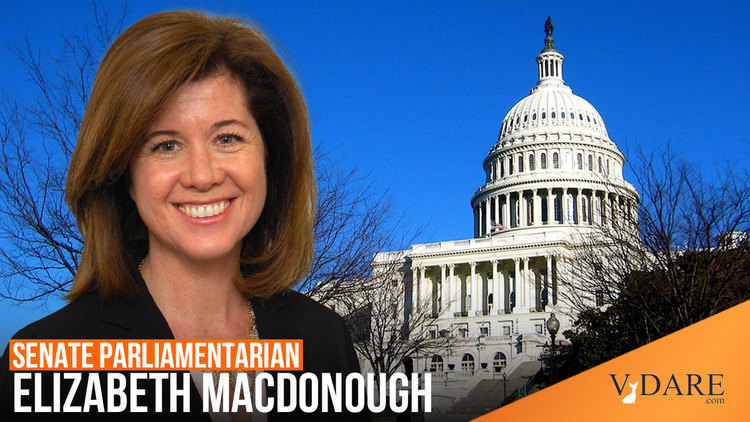 Senate Parliamentarian Elizabeth MacDonough delivered a serious blow to Democrats’ Amnesty hopes Thursday. She ruled that the Democrats’ third—and likely final—plan to sneak Amnesty in through the Build Back Better budget bill could not be included in the legislation [Senate Parliamentarian Rejects Democrats’ Immigration Proposal in $2 Trillion Bill, by Michelle Hackman and Andrew Duehren, Wall Street Journal, December 16, 2021].

The BBB bill is getting passed through the reconciliation process. This allows a bill to pass the Senate with only a simple majority—if its contents are found by the parliamentarian to narrowly pertain to budget matters. MacDonough found all of the Democrats’ Amnesty proposals failed to do that.

The latest idea would give legal status to any illegal immigrant who arrived in the U.S. prior to 2011, but it would not grant them a pathway to citizenship. The two previous Amnesty proposals offered a pathway to citizenship to millions of illegals. Democrats believed the parliamentarian would go easier on a proposal without the pathway. They were mistaken.

This development may possibly kill the entire bill. Progressives have demanded Democrat leaders overrule the parliamentarian and insert an Amnesty with a pathway to citizenship in the bill. Senate Majority Whip Dick Durbin and others are open to the idea, but that move risks losing the support of moderates such as Joe Manchin and Kysrten Sinema. Manchin said last week that he wants the bill to strictly conform to the parliamentarian’s rulings.

Democrat leaders are in a pickle. They can scrap Amnesty altogether and risk progressive support, or they can reinsert the measure against the Parliamentarian’s ruling and risk moderate support. Either decision may kill the bill and derail the Democrats’ legislative agenda.

The Parliamentarian’s decision reduces the chances that Amnesty will pass anytime soon. Additionally, it deflates the horrible Build Back Better bill. Immigration patriots should be happy with the news.