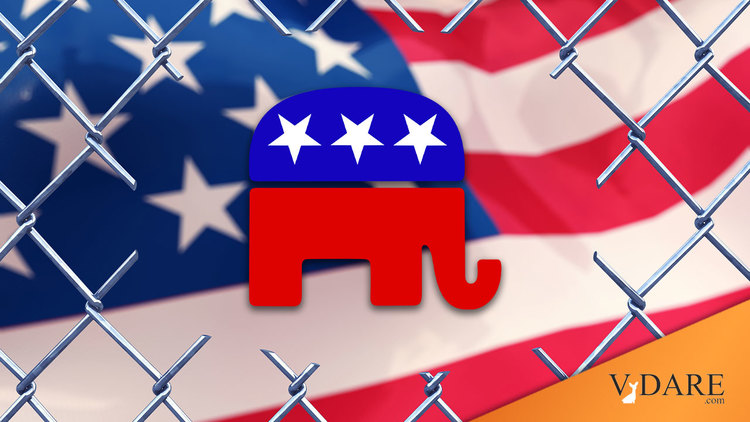 The GOP/GAP seems set to retake Congress (although that doesn’t mean it won’t seize defeat from the jaws of victory [Republicans Can Flip Congress in 2022-but GOP Stands in its Own Way, by Jacob Jarvis, Newsweek, November 18, 2021]). But even if the GOP does take the majority, it’s not impossible that it would work together with President Biden to pass Amnesty while opposing him because he won’t fight enough wars overseas. There’s not yet a positive GOP nationalist agenda. Patriots need to insist on one before simply voting against Joe Biden in 2022.

If your objective is just to see Republicans win, the GOP may have adopted the correct strategy: standing absolutely still. This has earned the GOP  a 2.4 point advantage in the RealClearPolitics Average for the generic congressional poll [2022 Generic Congressional Vote, RealClearPolitics, accessed December 27, 2021]. Gallup shows that President Biden’s approval rating has evened out at about 43%, though that’s still 20 points better than the approval rating of Congress [Joe Biden’s Job Approval Rating Steady in December, by Jeffrey Jones, Gallup, December 21, 2021]. Economic issues, notably inflation, are hurting President Biden [Biden’s economic ratings are worse than Carter’s, by Harry Enten, CNN, December 21, 2021].

Yet we shouldn’t overlook immigration. Voters are moving towards an Immigration Patriot position. According to a recent SSRS poll for CNN, 59% of those surveyed oppose the way President Biden is handling immigration, including about two-thirds of white voters [REL8A Biden Economy, SSRS, December 15, 2021 (taken December 8-12), p. 24]. Another poll finds 60% of likely voters disapprove of President Biden’s immigration policies [Schoen Cooperman Research, National Likely Voter Survey, December 2021]. A majority of voters also blame Democrats (55 percent) rather than Republicans (22 percent) for the crisis [The Democratic Party’s deterioration is shattering hope for the midterms, by Douglas Schoen and Carly Cooperman, The Hill, December 19, 2021].

At a time when a pandemic is being used to justify sweeping crackdowns, unscreened invaders from around the world continue to waltz across the southern border of a collapsing empire. Though the economy continues to worry Americans, it’s still a bonanza for foreigners, who are now present in this country at the highest numbers in history [US immigrant population hits the highest in HISTORY under Biden: Study says 14.2% of American residents are foreign-born – the most in 111 years – as White House deals with record border crossings, by Katelyn Caralle and Morgan Phillips, Daily Mail, December 20, 2021].

Customs and Border Protection figures show an increase of 140% in encounters with illegals compared to this time last year [Border crisis continues, November encounters up 140% over same time last year, by Peter Hasson, Fox News, December 17, 2021]. Illegals are clearly expecting better treatment under the Biden Regime, with regulatory changes and a legislative attempt at Amnesty both serving as a lure.

Senator Joe Manchin (D-WV) prevented the White House from sneaking in Amnesty via the so-called “Build Back Better” bill [Joe Manchin Just Tore Out the Heart of Biden’s Agenda, by Peter Wade, Rolling Stone, December 19, 2021]. Yet what the senator from West Virginia can see, some Republicans can’t. Rep. Maria Elvira Salazar, one of the GOP’s Diversity trophies, is already pushing Amnesty on the grounds that it will win Hispanic voters [GOP faces opportunity to take on immigration, if it wants, by Suzanne Monyak, Roll Call, November 18, 2021]. Raul Reyes at NBC, in a strange column ostensibly remembering the late Bob Dole, says the GOP has an opportunity to move past its “anti-immigrant” reputation [Bob Dole’s standing with Latino voters reflects changing Republican Party, NBC, December 5, 2021]. Gustavo Arellano has a similar theme at the Los Angeles Times, suggesting that the GOP could win Hispanics if only they would repudiate the legacy of Proposition 187 in California and embrace more immigration [Column: Why Democrats should worry about more Latinos going for GOP in 2024, December 23, 2021].

It’s impossible not to see this as concern trolling—a deliberate attempt to “help” the GOP by suggesting the party import a demographic that still votes majority Democratic.

The U.S. Chamber of Commerce is also pushing for more foreign workers, which, given the GOP’s traditional role as Big Business’s servants in the legislature, means we could well see another “pro-business” Amnesty plan under a Republican Congress [Biden and businesses agree on one thing: US needs immigrant workers, by Rebecca Rainey, Politico, December 4, 2021].

The GOP is reportedly “targeting” Hispanic voters with more outreach. But this effort will be counter-productive if it focuses on Amnesty for illegal aliens [GOP Targets Vulnerable House Democrats in Texas with Increased Latino Outreach, by Adrian Carrasquillo, Newsweek, December 16, 2021]. If the GOP really wants to engage with Hispanic voters, they should look at what these voters really want. Hint: it’s not Amnesty.

Most Hispanics are already fed up with “Wokeism,” as seen by their hostile reaction to the term “Latinx” [Democratic Groups Reckon With ‘Latinx’ After Poll Shows It Offends Latinos, by Adrian Carrasquillo, Newsweek, December 23, 2021].

Yet a recent poll shows danger as well as opportunity for Republicans. Just 20% of Hispanics listed immigration in their top three issues in a poll from Axios/Ipsos [Axios-Ipsos poll: Crime a top worry for Latinos, Margaret Talev and Russell Contreras, December 21, 2021]. The top two issues were COVID-19 and “crime or gun violence.” Inflation was just behind "climate change” as a top issue. More than half think America is in decline.

Thus a clumsy GOP “outreach” that puts Amnesty for illegals at the top of the agenda and rhapsodizes about America’s multicultural future will do more harm than good.

Instead, the GOP program to win over Hispanics is the same approach that it should use to win back the country. Eliminate Affirmative Action and the motivation for “Latinx” activists to push counter-assimilation. Crack down on crime and don’t repeat Donald Trump’s disastrous decision to try to win the black vote by letting criminals out of jail. Secure the border before even allowing any discussion of what should be done about illegals already in the United States. Promote a positive agenda that can replace unpopular Critical Race Theory with a Civic Nationalist program that at least has a chance of saving the country.

Popular measures that the ineffective President Trump left on the table should be advanced, including making English the official national language and implementing a remittance tax to pay for a wall on the southern border.

Yet though all this is possible and popular, I don’t see GOP leaders acting without pressure from the grassroots. In Congress, it looks like it’s still 2005. Though President Vladimir Putin has withdrawn forces from the Ukrainian border, the GOP was calling for more military “aid” to that country, with Senator Roger Wicker (R-MS) even broaching the use of nuclear weapons [Tucker Carlson Slams GOP Senators for Backing ‘Pointless’ Conflict with Russia, by Brendan Cole, Newsweek, December 8, 2021]. Donors have already been pressuring the GOP to cave on Amnesty [GOP donors push senators on immigration, by Olivia Beavers, Politico, July 12, 2021].

Polls show that voters are worried about the power of Big Tech [Americans widely distrust Facebook, TikTok and Instagram with their data, poll finds, by Heather Kelly and Emily Guskin, Washington Post, December 22, 2021]. But there is little unity within the GOP when it comes to Big Tech. And there’s no guiding vision (such as an Internet Bill of Rights that would guarantee First Amendment protections on monopoly social media platforms) that could rouse the conservative base [GOP riven by infighting over Big Tech crackdown, by Melanie Zanona, Olivia Beavers, and Emily Birnbaum, Politico, June 23, 2021].

Come to think of it, there’s no guiding vision for the GOP on anything—no “Contract With America” that says way people should vote for Republicans, instead of against Joe Biden.

This is a moment of great danger for immigration patriots, similar to what happened when President Donald Trump was elected. Despite a campaign like none other in American history, the new president immediately handed over control to those he had just defeated [Steve Bannon: ‘Original Sin’ Of Team Trump Was Embracing The Establishment, by Charlie Spiering, Breitbart, September 10, 2017]. Congressional Republicans are likely to do the same thing if they win a victory by default.

Immigration patriots need to lay down the line now that Amnesty is a nonstarter for any candidate. It would be better to have a paralyzed Democratic Congress and President than a GOP majority that would push through Amnesty because it thinks that it would win Hispanic votes.

The GOP also needs to have a populist agenda that has substantive policy goals, not just vague rhetoric about conniving “elites” and “Let’s Go Brandon.”

Ultimately, as so many times before in the Amnesty battles, it’s up to patriots to impose their will on the GOP. A Republican victory in 2022 means nothing to us unless it leads to Patriotic Immigration Reform.

If we forget this, we might end up with a Republican majority that actually makes things worse.