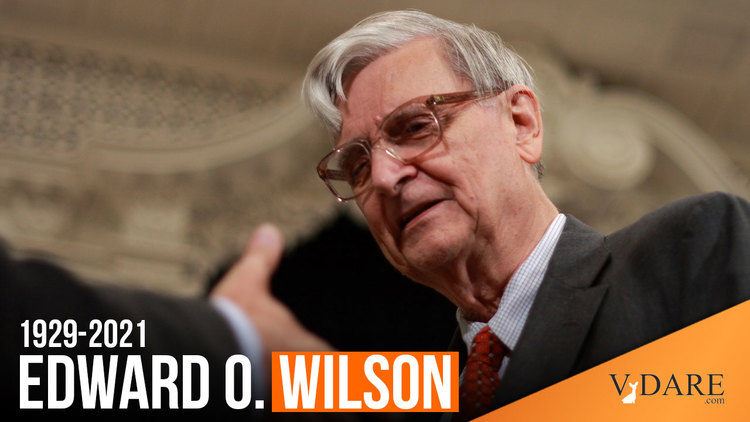 On Edward O. Wilson: “A Genius, So Massive And Important Was His Contribution. And The Last Of The Scientific Generation That Believed In Truth”

Recently, in April 2021, I emailed Edward O. Wilson to ask if he might consider appearing on my internet show The Jolly Heretic, where I discuss supposedly “controversial” science increasingly banned in the Woke Cathedrals that Western universities have become. He replied promptly, politely explaining that he would love to, but being very old, thus, was no longer giving any interviews. His death on 26 December, aged 92, makes even greater sense of why he was disinclined to do a live stream. 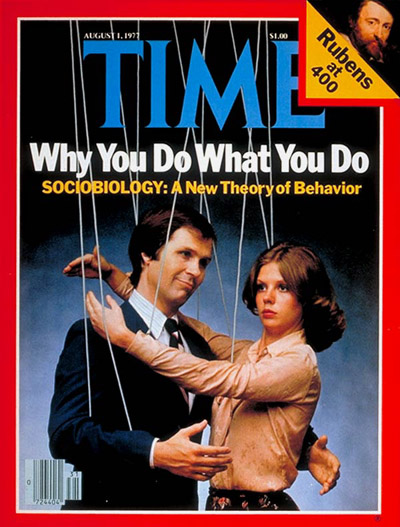 In 2006, I read Wilson’s 1975 masterpiece Sociobiology: The New Synthesis and it effectively changed my life. Making the cover of Time magazine and resulting in Wilson being awarded the National Medal of Science from then-president Jimmy Carter in 1977, it cogently argued that animal behavior, personality and intelligence, and any intra-species differences in these, were very substantially genetic, and that was as true with humans as it was with any other similar animals. Sociobiology—a term now replaced with “evolutionary psychology”—forced me to slowly realize, though I fought against it, that much of what I had learnt while training as a cultural anthropologist was not only wrong but wrong because my discipline was in the grip of intolerant dogmatism.

I devoured other brilliant books by Wilson, two of which have won Pulitzer Prizes. Consilience (1998) demonstrated that every academic discipline is part of a hierarchy, at the pinnacle of which is pure Mathematics. Theories can only be accepted if they make sense in the discipline which underpins them. Models in sociology must be reducible to psychology, which must in turn be reducible to biology, which needs to make sense in terms of Chemistry and so on.

Wilson decried the way in which academia separates into different disciplines and gets taken over by ideologues, such as the scientific fraud Stephen Jay Gould (1941-2002), whom Wilson referred to as a

charlatan…seeking reputation and credibility as a scientist and writer, and he did it consistently by distorting what other scientists were saying and devising arguments based upon that distortion.

[E. O. Wilson’s Theory of Everything, by Howard French, The Atlantic, November 2011]

Academia breaks up; Wilson wanted to put it back together. Wilson argued in the same book that human behavior reflects a combination of genetic and environmental influences, meaning that free will is a scientific impossibility.

In On Human Nature [1978], Wilson explored the biological origins of many aspects of human behavior, including homosexuality and religion. This idea was inspired by Wilson’s own autistic “near obsession,” as he termed it, with ants—he was known as “The Ant Man”—and other eusocial species. Being sterile, worker ants could only pass on their genes indirectly, via aiding the survival of queens. This “group selection,” Wilson convincingly averred, made sense of so much human self-sacrificial behavior. Wilson also discovered precisely how ants communicate with each other.

In The Social Conquest of Earth (2012, p.100), Wilson explored the dynamics of group selection further. He observed that:

When in experiments black and white Americans were flashed pictures of the other race their amygdalas, the brain’s center of fear and anger, were activated so quickly and subtly that the conscious centers of the brain were unaware of the response. The subject, in effect, could not help himself.

In other words, we are evolved to be with people who are genetically similar to us, and will feel dysphoria if we are not.

As many readers will know, due to Wilson’s fearless pursuit of biology while working at Harvard (from where he retired in 1996), he was subject to one of the first serious cancellation attempts at the hands of the Leftist anti-science mob. In response to the publication of Sociobiology, Harvard colleagues Gould and Marxist Richard Lewontin, whose much-touted critique of the concept of race has been shown to be a “sleight of hand,” founded along with others the “Sociobiology Study Group,” and denounced Wilson’s “deterministic view of human society and human action” in an Open Letter [Against Sociobiology, New York Review of Books, August 7, 1975]. They emotionally asserted, as Wilson described in his 1994 autobiography Naturalist, that

All hypotheses attempting to establish a biological basis of social behavior "tend to provide a genetic justification of the status quo and of existing privileges for certain groups" and lead to the Nazi gas chambers.

In 1978, Wilson’s public lecture on sociobiology at the annual conference of the American Association for the Advancement of Science was attacked by a Marxist group called “Science for the People.” Members managed to pour a pitcher of iced water over Wilson, before childishly declaring, “Wilson, you’re all wet!” [Anatomy Of A Fierce Academic Feud,  by Colin Campbell, NYT, November 9, 1986]

I would like to go further. Wilson was a genius, so massive and important was his contribution. In 2016, I wrote a book with evolutionary psychiatrist Bruce Charlton, The Genius Famine. I believe that Wilson’s massive contribution to science is borne out of the genetic and environmental influences, and psychological type, that we find in other geniuses.

Born in 1929 in Alabama, Wilson’s reasonably intelligent parents—his father was a government accountant—split up when he was seven. Divorce was scandalous at the time, especially for Southern Baptists like them. Unable to look after him, Wilson’s mother placed this only child in the care of a family friend for a number of years. Eventually, Wilson ended up with his father, who travelled a great deal for work reasons, meaning Wilson led a peripatetic existence, constantly changing neighborhoods.

Psychiatrist Felix Post has found that a broken home correlates positively with genius [Creativity and Psychopathology, by Felix Post, British Journal of Psychiatry, 1994]. This may be true for a number of reasons. The typical genius combines outlier high IQ with autistic and psychopathological traits. This means that, low in impulse control, he thinks “outside the box” and develops original ideas. Further, lacking social awareness, or not caring about people’s feelings because “Truth” trumps all, he is happy to present these ideas, despite the fact that original ideas always offend vested interests.

These traits also predict divorce; so the genius may simply inherit these traits along with very high IQ, the latter occurring due to chance genetic combinations. Depression, which Wilson says in his autobiography he suffered from, also predicts creativity, due to desire to make sense of a chaotic world, and divorce. On the other hand, a broken home—a dangerous, unpredictable environment—can elevate these traits in the child.

Reading Wilson’s autobiography, it is clear that, from a very young age, he was interested in (in fact, autistic-obsessed with) “things”—specifically fish, and later ants—rather than people. Still, his social skills were sufficient that he married Renee Kelly, in 1955, the year he received his Ph.D. from Harvard, and stayed married, producing a daughter, Catherine.

But Wilson was undeniably obsessive. Autism is characterized by being high in systematizing but low in empathy—the extreme “male brain.” His autobiography reveals Wilson forgetting the names of families he spent weeks staying with as a child, but remembering the specific fish that he examines at the time. Aged seven, he lost his sight in one eye, due to a fish fin getting into it in an accident.

Like Isaac Newton and so many other geniuses, Wilson didn’t particularly shine at school. He focused on that which fascinated him, naturalism, and only worked hard enough to pass anything which didn’t. He only started “playing the game” when, at his military school, he was rejected from a military university scholarship due to being blind in one eye and needed the grades to get into the University of Alabama to follow his dream of being a scientist. He then began his Ph.D. at the University of Tennessee before transferring to Harvard.

Like many geniuses, Wilson had a strong sense of purpose—almost a higher calling to the Truth. Having become an entomologist, Wilson, also like many geniuses, made contributions in all kinds of other areas: human psychology, human biology, the study of religion and so on.

As I noted in The Genius Famine, this is what the high IQ creative scientist—as opposed to the run-of-the-mill, diligent, normal range intelligence, incrementalist scientist with high impulse control and high Agreeableness—does: he generates original connections. All the incrementalist can cry is, “How can he do this?! He doesn’t have a qualification in it, like me!”

Wilson was clear about his intellectual deficiencies in his memoirs, and they are those that other geniuses have had.

As I said in The Genius Famine, intelligence is like a pyramid. At the base there are abilities that are weakly associated with intelligence, such as driving a car, or catching a ball. Above this there is Language, Math, and Spatial ability. Above this there is general intelligence (g) at the pinnacle of the pyramid. These forms of intelligence all intercorrelate. People can be “linguistically tilted” but, in general, people who are good at Math are good at English and are high in g. However, as people become more intelligent, the positive relationship between the different kinds of intelligence breaks up. Super-clever people can, thus, be brilliant at Math but verbally inarticulate and especially poor at some of the abilities at the base of the pyramid. Hence, Einstein would get lost, A.J. Ayer couldn’t drive and Isaac Newton nearly failed his degree and was totally impractical.

At Harvard, Wilson tried to improve his math, but just couldn’t; admitting he was “semi-literate” in the subject. He also admitted in his autobiography to having a “poor memory”—like Newton.

But damaged, or oddly developed, brains compensate for this sort of thing by commandeering other areas, leading to unusual abilities. In Wilson’s case, he concluded in his autobiography that this was “an unusual ability to make comparisons of different objects, thus to produce syntheses of previously unconnected information.” This is the essence of originality. And its expression is added to by the fact, as Wilson was aware, “I write smoothly…I pushed these strengths and skirted the weaknesses.”

In Edward O. Wilson, science has lost a truly brilliant man; one of the last geniuses of the twentieth century.

His “unusual ability to make comparisons of different objects, thus to produce syntheses of previously unconnected information” was the essence of his genius.

Not surprisingly, it appears to have reflected the same kind of psychology, and broader biography, that is found among many other acknowledged geniuses.

Wilson's death is one of the last of the generation of scientists who overwhelmingly held to a fundamental belief in the importance of “truth” above all else—possibly because they were raised on an overwhelmingly conservative and religious society in which something higher came above individual feelings and “truth" was sacrosanct.

The 1978 physical attack on Wilson foreshadowed the current Cancel Culture–dominated, scientific Dark Age. The people who threw iced water over Wilson then are in charge of places like Harvard now.

God help us all.

Edward Dutton [email him | Tweet him] is Professor of Evolutionary Psychology at Asbiro University, Łódź, Poland.  You can see him on his Jolly Heretic video channels on YouTube and Bitchute. His books are available through his web page here.