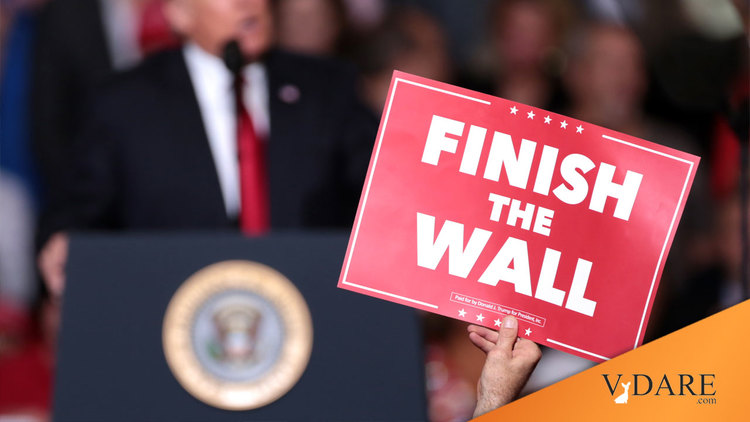 Confident predictions of a Red Wave election year were shaken last week when Republicans significantly underperformed in bellwether special elections. Election forecasters are now not so confident of a GOP/GAP sweep [Growing Evidence Against a Republican Wave, by Nate Cohn, New York Times, August 24, 2022] and neither are some Republican leaders. There are a number of reasons for concern, but the biggest one is that Republicans aren’t getting rural whites—their most loyal voters—out to the ballot box. The key to victory will be turning out this crucial voting bloc, and the best way to do that is through an America First message that stresses immigration patriotism and hostility toward Critical Race Theory. If Republicans can’t do this, they may be too hopeless to ever win again.

2022 should be an easy Republican victory. It’s rare for the party in the White House to do well in midterms. The Democrats have done little for America in two years in power. Things have gotten much worse under Joe Biden’s watch. The economy is heading towards (and may already be in) a recession, inflation is at historic highs, there’s a full-blown invasion at the southern border, crime is getting worse, and the president can barely form coherent sentences. So what‘s the problem?

There are two explanations. One is that Democrats are effectively mobilizing their base with the abortion card. In four elections since the Supreme Court overturned Roe v. Wade in June, Democrats have done way better than expected. All four of the elections were predicted to be Republican wins, with three of them in districts that lean Republican by double-digits. However, Republicans barely won three of the districts and lost one (NY-19) that they were expected to win.

Democrats were also able to muster a strong turnout in deep Red Kansas earlier this month to defeat a ballot measure that would’ve allowed the state legislature to restrict abortion [Yes, Special Elections Really Are Signaling A Better-Than-Expected Midterm For Democrats, by Nathaniel Rakich, FiveThirtyEight, August 24, 2022]. A majority of Americans now consider abortion an important issue in the upcoming election, with 71 percent of Democrat-leaning voters saying it’s “very important.” There’s also an increase in support for keeping the practice legal [Abortion Rises in Importance as a Voting Issue, Driven by Democrats, Pew Research Center, August 23, 2022].

These numbers clearly favor the Democrats. But this doesn’t necessarily mean Republicans should change their stance on abortion. Pro-lifers are an integral part of the GOP base and overturning the Roe v. Wade judicial legislation was a longstanding promise to the conservative movement. To abjure that would betray some of their most loyal voters in a questionable bid to gain voters who don’t lean Republican anyway. It’s not a smart political strategy.

But Democrat enthusiasm doesn’t tell the whole story. The second reason for GOP momentum loss is that the party is failing to motivate its base. NY-19 showcases this. Commentator Ryan Girdusky found that in every county Molinaro won by double-digits, turnout was down by 35 percent compared to 2020. If turnout had been the same in the special election as it was in 2020, he would’ve won the race. Similar levels of low turnout in rural counties were found in special elections in Nebraska and Minnesota. The problem, at least in Molinaro’s case, was entirely due to not getting out rural white voters. He did better among independents than Trump, but it wasn’t enough to win [GOP Falling In Specials, by Ryan Girdusky, National Populist Newsletter, August 24, 2022].

So why aren’t rural whites motivated to vote? It’s largely due to the GOP’s messaging. With all the problems facing America, Republicans have fixated on safe topics like inflation, the economy, government spending, and the IRS as the core issues ahead of the election. These are certainly issues, but they’re obviously not connecting with rural whites. The base just isn’t motivated by inflation discourse and continued evocation of the 87,000 new IRS agents.

What does drive them to the polls is immigration patriotism, Law and Order, and opposition to Woke indoctrination in schools. This has been proven several times, most notably with Donald Trump and Virginia’s Glenn Youngkin. Trump won in 2016 and nearly secured the White House again in 2020 by turning out the working class white vote in record numbers.

Trump campaigned on an America First agenda in 2016 that helped increase the share of the GOP vote among non–college educated whites. Republicans won them by a whopping 39-point margin [Behind Trump’s victory: Divisions by race, gender, education, by Alec Tyson and Shiva Maniam, Pew Research Center, November 9, 2016]. It represented a fourteen point increase over Mitt Romney’s margin in 2012. Trump still did well among this demographic in 2020, even with a watered-down America First message. He won them by a 35-point margin and the white working class increased its turnout by 6 percent in the last presidential election [Turnout in 2020 election spiked among both Democratic and Republican voting groups, new census data shows, by William H. Frey, Brookings, May 5, 2021].

Trump won this demographic with his appeal to immigration patriotism. No other Republican presidential candidate had drawn so much attention to this as Trump. Crowds chanted “Build the Wall” at his rallies and the issue always remained at the forefront of Trump’s 2016 campaign. It received less attention in 2020, but it was still given greater prominence than what Establishment Republicans would be comfortable with. Trump knew this issue electrified Middle Americans and secured their loyalty. He wouldn’t have made it to the White House without this pitch—a fact even Leftists admit [Trump’s Hardline Immigration Stance Got Him To The White House, by Harry Enten and Perry Bacon Jr., FiveThirtyEight, September 12, 2017].

In Virginia, Glenn Youngkin showed the power of another potent issue among working class whites: Critical Race Theory aka anti-white racism in schools. Youngkin made banning CRT and eliminating the new “racial equity” standards in schools a central tenet of his campaign. It worked. Youngkin won because he turned out rural counties in record numbers and won these voters by overwhelming majorities. In fact, he exceeded Trump’s share of the non–college educated white vote. In 2020, Trump won this share of the demographic in Virginia by a 24 point margin, according to CNN exit polls. Youngkin won it by an astonishing 52 point margin [2021 Virginia exit polls | CNN Politics, November 3, 2021].

But at the present moment, these issues are being left on the table. Some border state Republicans are talking about immigration because they can’t avoid it. Governors in Texas and Arizona are bussing illegals to DC and New York City to draw attention to the issue. But even though we’ve had seventeenth months straight of more than 150,000 illegals being caught at the border, the Regime Media just won’t pay attention [Nearly 5 Million Illegal Immigrants Crossed Border During Biden Administration, by Spencer Lindquist, Breitbart, August 20, 2022].

Voters, however, do care about it. Just last week, an NPR poll found a majority of Americans believe there is an invasion of the border, with 76 percent of Republicans saying so. A majority of Republicans also say immigrants are systemically replacing native-born American and 70 percent think Democrats are working to enact Open Borders to bring in more foreigners [A majority of Americans see an ’invasion’ at the southern border, NPR poll finds, by Joel Rose, NPR, August 18, 2022].

Unfortunately, a lot of Republican politicians are not running on this issue—a fact Tucker Carlson noticed last week. He ripped into the party for not campaigning on immigration and crime in the midterms and instead focusing on the price of crudité (GOP Pennsylvania Senate nominee and Turkish dual citizen Mehmet Oz  actually mentioned this in a much-derided ad):

There are candidates who are talking about the stuff—J.D. Vance in Ohio, Blake Masters in Arizona, Joe Kent in the Pacific Northwest. The leaders of the Republican Party in Washington would rather those guys lose and people like them lose than change the focus of the party to issues that voters actually care about. But the truth is, you can’t win elections unless you listen to voters. They’re telling you what they want.

[Despite Biden’s unpopularity, Democrats still have a chance of holding Congress in November, by Tucker Carlson, Fox News, August 18, 2022]

Critical Race Theory also seems to be losing the attention of Republican politicians, despite it being a proven winner. That may be due to schools being out for the summer. Whatever the reason, Republicans are leaving a vital issue on the table. Polling from the spring shows the issue clearly favors Republicans. One poll found that 61 percent of voters agree that “Democrats are teaching kids as young as five Critical Race Theory, which teaches that America is a racist country and that white people are racist.” The respondents were clearly not happy with that situation [Latest Polls Show Education and Critical Race Theory Could Define the Midterms, AMAC, March 16, 2022].

Middle Americans see the country they love in shambles. They get to experience the horrors of Open Borders no matter where they live—Biden makes sure to send illegals all over the country so all can experience the invasion. They see crime rising in the cities and Democrats letting the offenders off without even a slap on the wrist. They see schools teaching their kids to hate themselves for being white. They see the Great Replacement all around them, and they want it to end. It matters more to them than the cost of vegetables. They want Republicans to speak out against it and will turn out for those who show the courage to talk about the real issues.

The best answer to increased Democrat enthusiasm is high enthusiasm among Republicans’ core voters. And the only way to achieve that is to promise immigration patriotism and opposition to Woke indoctrination.