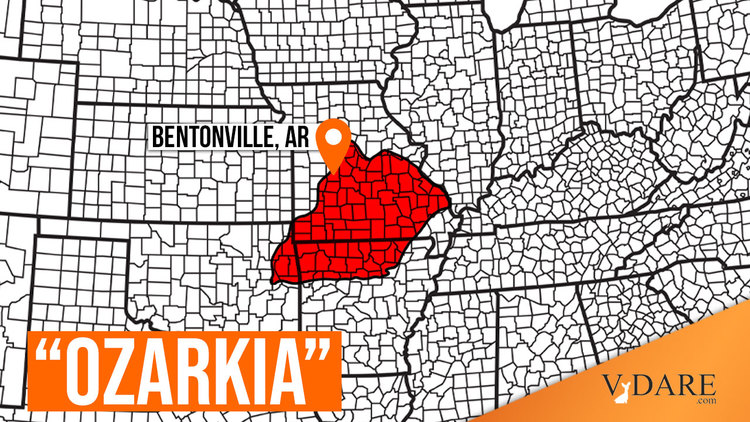 The Waltons Go To War On Ozarkia

My hometown, Bentonville, Arkansas, was a wonderful place to grow up. A community for families, it was a wholesome slice of small-town Americana that rootless corporations are attempting to ruthlessly annihilate from sea to shining sea. Bentonville, you see, is home to Walmart’s global headquarters, along with the Walton family and their Family Foundation. Worth $238 billion, the Waltons are the wealthiest family on earth. But instead of devoting their fortune to alleviating the brutal poverty that sweeps across their native Ozarks and Arkansas, the Waltons have committed their wealth to wrecking my hometown, and if they get their way, the rest of the state and country. The damage this family and its foundation has done to Bentonville, much of it through donations to openly subversive groups, is incalculable.

Last year, the Leftist magazine Jacobin published an excellent piece exploring how Bentonville is, in every respect, a modern company town, and how the Waltons use their Walton Family Foundation as a titanic tax shelter and accumulation strategy [Walmart’s Company Town of Bentonville, Arkansas, by Stephanie Farmer, March 27, 2021]. 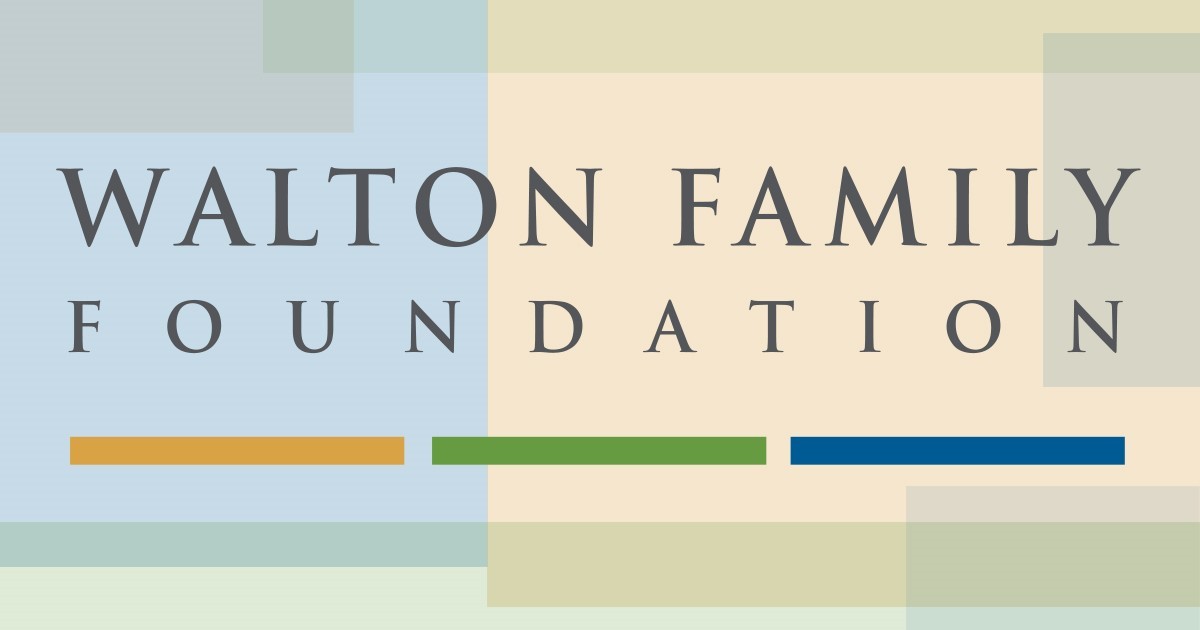 One aspect of turning Bentonville into a company town is the foundation’s terraforming the city into a playground for the managerial class. The Walton family’s mission to transform Bentonville and the Ozarks into some synthesis of Austin, Portland, and Asheville is really a mission of cultural and demographic genocide against Ozarkians and our culture. With Walmart and the Waltons’ massive fortune, which of course buys political influence at the municipal, county, state, and federal levels, it is no surprise that Arkansas’ politicians are entirely in the family’s pocket.

In 2019, my sources tell me, Walmart was secretly involved in pushing the United Daughters of the Confederacy to remove the town’s 112-year-old Confederate statue from its long-time place in the city’s downtown square [Confederate monument removed from Bentonville square, by Mike Jones, Tracy Neal, Arkansas Democrat-Gazette, September 3, 2020].

Like the Godfather, I was told, the corporate behemoth made the UDC’s ladies an offer they couldn’t refuse: Remove the statue and Walmart will help finance a new park for it [Bentonville planners OK Berry Park plan; Confederate statue to be centerpiece of site, by Mike Jones, Arkansas Democrat-Gazette, February 2, 2022]. Otherwise, the county will remove and destroy it, and forget the new park.

Of course, UDC agreed, but also had to present the decision as its own. Then, sources told me, Walmart funneled the money for the statue’s removal through a local historical society so that nobody would know of Walmart’s involvement.

A Walton Family Foundation employee, by the way, had already helped vandalize the monument and had been fined $16,000 [Confederate statue vandal must pay $16,000, by Tracy Neal, Arkansas Democrat-Gazette, June 17, 2020].

The destruction of our Southern heritage is more than symbolic, of course. The Waltons—through Walmart and the foundation—are importing legions of urban Leftists to colonize Bentonville. Now, LGBT flags fly from the rooftops and Biden signs line some of the streets. This is in a county that voted more than 60 percent for POTUS 45 Trump in 2020.

Fleeing their coastal hells, these Leftists are dispossessing Bentonville natives and will eventually take over politically thanks to redistricting. Ravaged by opioids and other societal pathologies, Arkansas’ population declined during the past decade. But population growth in Northwest Arkansas’ 3rd congressional district has been so enormous that the latest redistricting gave a significant number of conservative rural residents to the 1st and 4th districts [3rd Congressional District set to shrink — by a lot, census number indicate, by Doug Thompson, Arkansas Democrat-Gazette, May 2, 2021]. Thus, the increasingly Leftist population centers of Bentonville, Fayetteville, and Fort Smith now have even more inordinate power over the district’s affairs. If things proceed like this for another 10 years, the district will become purple, if not blue. I suspect that this was the Legislature’s—and thus the Waltons’—goal.

As for the Ozarks regionally, they were divided among the First, Third, and Fourth Districts. The most sensible redistricting proposal would have been to unite the Ozarks into one district because it is a culturally distinct region with a homogeneous political culture of right-wing populism. Of course, we couldn’t have that!

Like BlackRock, the investment company that is purchasing whole neighborhoods of inexpensive homes across the country, the Waltons and their friends have used inflation and speculation to drive up prices to the point that native Arkansawyers can no longer afford to live in their hometown.

The average price of a new home in Bentonville is $676,000 [Data shows disparity in Bentonville affordable housing, by Anna Darling, KNWAFox 24, March 25, 2022]. Homeowners are being priced out. Renters are being evicted as landlords sell out to developers. Hideous, soul-crushing apartment complexes are popping up everywhere. Now, the Waltons are making noise about low-income housing projects. So, they drive us from our homes, kill private home ownership, and then jabber about the need for “affordable housing.” Who will fill this new housing? Certainly not Ozarkians.

That invites another discussion of the Walton’s War on Ozarkia: The Great Replacement.

Fayetteville is home to Arkansas’s sole refugee resettlement operation, an organization called Canopy NWA. Since its inception, Canopy has received more than $500,000 from the Walton Family Foundation. 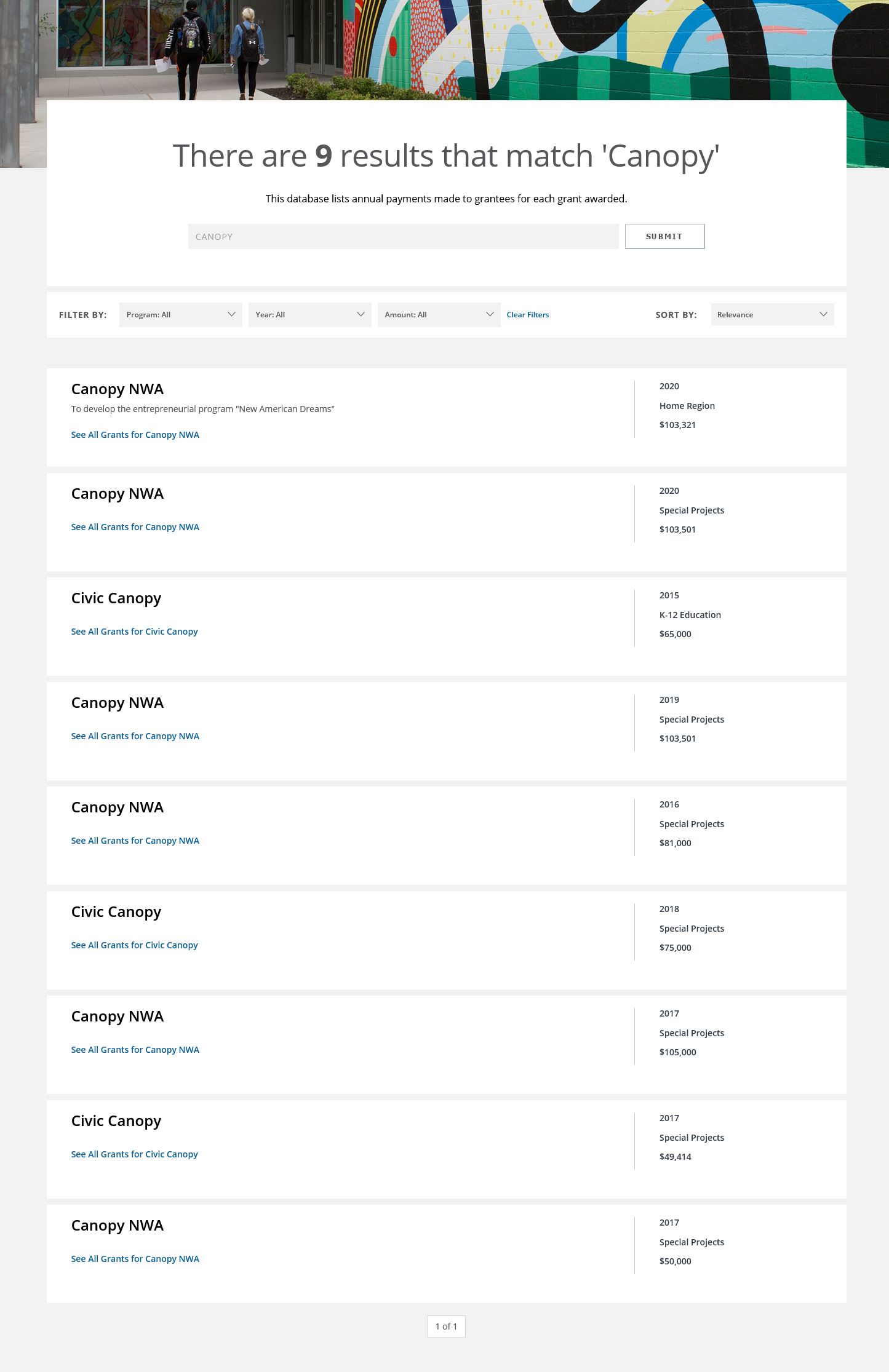 Clint Schnekloth, pastor at Fayetteville’s Good Shepherd Lutheran Church—which, as we will see, is also an incubator of child grooming and child transgenderism—founded the organization and is board chairman.

Canopy is an affiliate of the Treason Lobby subsidiary Lutheran Immigration and Refugee Service and one of nine agencies that receive tens of millions of dollars to settle millions of Third World invaders across the United States [Nonprofit Spotlight: Refugee resettlement organization prepares to aid displaced Afghans, by Victoria Hernandez, Arkansas Traveler, October 5, 2021]. In 2016 alone, government provided more than 96 percent of LIRS’s budgets. Get that? Our tax dollars are funding our replacement.

With the United States Conference of Catholic Bishops, LIRS is one of two agencies that contract with the federal government to bring unaccompanied illegal minors into our country.

The president of LIRS is a Sri Lankan called Krishanti Vignarajah, a former policy director for Michelle Obama. LIRS sponsored the nationwide “Lights For Liberty” protests against Immigration and Customs Enforcement. They culminated in Dutch immigrant and Antifa terrorist Willem Van Spronsen’s attempt to blow up an ICE detention facility in Tacoma, Washington, with a 500-gallon propane-tank bomb.

In conjunction with LIRS, Canopy has imported hundreds of rapefugees from countries like Rwanda and Afghanistan to live in the Ozarks.

If all of this isn’t sinister enough, it gets worse.

The Waltons—again, through their omnipotent “family” foundation—are among the world’s most powerful promulgators of transgender propaganda. Example: the vile “Transition Closet.”

And what does the Transition Closet do? A teacher explained on Tik-Tik:

In a [deleted] TikTok video posted to Twitter by the Teachers Exposed [suspended] account, a public high school teacher in Oakland, California, named Tommy Martin-Edwards explains how TTC facilitates the gender transition of children behind parents’ backs. “The goal of the transition closet is for our students to be able to wear the clothes that their parents approve of, come to school and then swap out into the clothes that fit who they truly are,” Martin-Edwards said.

[A Skeleton in the ‘Transition Closet,’ by Pedro Gonzalez, Intellectual Takeout, February 18, 2022]

When classes end, the kids change back into their normal clothes, and mom and dad are none the wiser.

Some of these “gender-affirming” clothes include chest-binding equipment for girls to bind their breasts flat to appear masculine, and “tucking thongs” for boys to flatten their penises. Whistleblowers have revealed that teachers in some elementary schools are actually providing children with puberty blockers. Of course, the Transition Closet hosts helpful how-to videos and promotes books that teach young children how to use the proper pronouns, and how to stretch before and after using breast-binders. The outfit also offers free consultations for “binder fitting, gender confirming underwear sponsorships, and size conversion.” 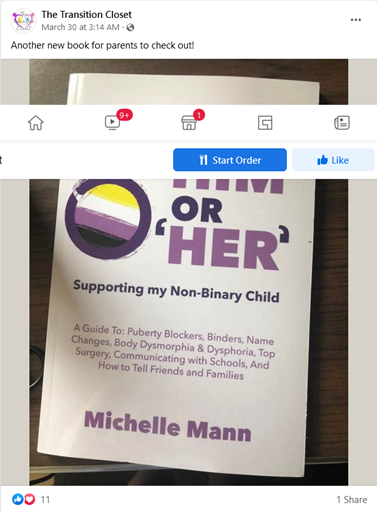 Last year, the “church” hosted a weeklong “Queer Camp for Kids,” featuring drag queens. Children as young as 12 were encouraged to attend [Fayetteville church to host ‘Queer Camp’ this summer, by Jamie Weiss, KMBC 9, April 18, 2021]. This year, they’re talking about making it a “sleepover camp.”

The Walton connection? The Transition Closet was one of 21 LGBT organizations included in a $750,000 grant from the Arkansas Community Foundation’s LGBTQ+ Advancement Fund, which in turn is funded exclusively by the “Alice Walton Foundation, Olivia and Tom Walton through the Walton Family Foundation, and the Winthrop Rockefeller Foundation” [Arkansas LGBTQ+ Advancement Fund Grants $750,000 to 21 Arkansas Nonprofits, Announces Next Grant Cycle, ARCF.org, February 2022].

I could go on, and will…briefly. During 2020’s Summer of Black Lives Matter, when rampaging BLM and Antifa mobs vandalized and looted cities, Walmart announced that it would establish a new “Center for Racial Equity” [Advancing Our Work on Racial Equity, CorporateWalmart.com, June 12, 2020].

Walmart is donating $100 million to “fund research, advocacy, innovation of practices and tools, stakeholder convening and support the work of Black philanthropic leaders and organizations that serve Black communities.” It will also “provide counsel across Walmart to increase understanding and improve efforts that promote equity and address the structural racism that persists in America.”

Casting an even more nefarious pall over the Walton Family Foundation is its Executive Director, Caryl Stern, former president of UNICEF USA and, wouldn’t you know it, former chief operating officer of the Anti-Defamation League.

The nouveau riche managerial class that has remade Bentonville in its own image, believe that Bentonville, the Ozarks, and Arkansas were nothing but benighted, primordial backwaters stuck in the dark ages before Walmart arrived.

We’re just supposed to celebrate the New Urbanist gentrification of a traditional Southern community as “growth,” without ever asking about the human and cultural cost of such “growth,” or over whose broken bodies the hooves of “progress” ran roughshod.

Walmart, the Waltons, and their managerial subversives simply believe they  are saviors on a mission from God.

One thing is certain: If they are not stopped, the Waltons will destroy us.

Neil Kumar [Email him/Tweet him] is a Republican candidate for U.S. Congress representing the Arkansas Ozarks. He is a member of the Sons of Confederate Veterans and Sons of the American Revolution, with blood that has been Southern since the seventeenth century. His work can also be found at the Abbeville Institute, American Renaissance, Clyde Wilson’s Reckonin’, Identity Dixie, and Truth to Power.  See an interview with him on the Dissident Mama podcast here.