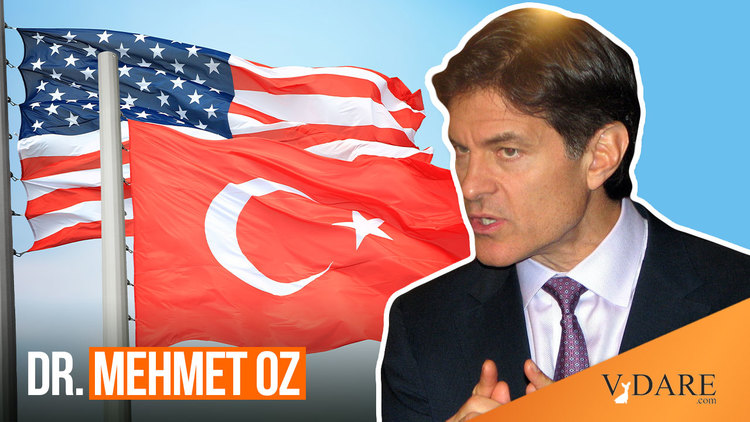 Dr. Mehmet Oz, "Dr. Oz" for short is a real doctor, and TV doctor as well. Here he is being funny on Craig Ferguson's program in 2012.

Apparently he's planning on carrying his Turkish dual citizenship into the Senate, even if it means that he won't have a Senator's security clearance:

Republican U.S. Senate candidate Mehmet Oz said today that he would forego certain security clearances that are provided to all U.S. Senators to keep his dual citizenship with Turkey.https://t.co/AGbzpLEmmP pic.twitter.com/GOtnANUC8b

Here's a story about his candidacy from November of last year:

Dr. Oz's prospective campaign for an open Senate seat in Pennsylvania remains a hush-hush affair — no one so far has admitted to working on it and the consultants thought to be involved are remaining tight-lipped https://t.co/r3QG04Ajvn

Dr. Oz is buying a house in Pennsylvania. Definitely how our political process is meant to work. Rich people parachuting in to states they don't live in.

Well, that's how Hillary Clinton became Senator from New York, and I doubt if it's the only such case.

Oz was born in 1960 in Cleveland, Ohio, the son of a Turkish doctor who was a resident at Case Western Reserve University in Cleveland.

As a child, Oz not only spent summers in Turkey, but kept up his Turkish citizenship by doing by doing his obligatory (for Turkish citizens) military service: he spent two years in the Turkish army after college.

Whether Oz is a good guy or a bad guy, he's obviously not a loyal American, and no, it doesn't matter if Turkey is in NATO or not.

Here's something Peter Brimelow said in a speech to the John Randolph Club in Cleveland in 2015:

Another aspect of reorganizing the nation: the redefinition of the political community. Something has to be done about dual citizenship. When you swear your oath of allegiance in the US—and I've done it—you swear to “abjure all allegiance and fidelity to any foreign prince, potentate, state, or sovereignty of whom or which I have heretofore been a subject or citizen.” But it's a joke. It's not enforced, because of a Supreme Court decision to accommodate some Israeli who wanted to retain his American passport. [Afroyim v. Rusk, 1967]

That could also, of course, be halted by statute, and it should be halted.

Now, some Americans are aware of this. My son, as some of you know, was, until very recently, a Marine. He went straight in after high school. When he was in Parris Island, we got a call, which is unheard of—you usually never hear from them from the moment they get there until they get out, you see them at the graduation ceremony.

Well, as a matter of fact, Alexander didn't have these passports. Not as a political statement, by the way—I don’t have any compunction about him getting the passports, because I don't make these laws. But I just hadn't gotten around to organizing it. So the sergeant said that was fine.

I said: "Well, they are NATO allies, you know."

He said: "Sir, until recently, having a foreign parent would have disqualified him from going into intelligence."

So there is some awareness. But the Marines are a somewhat unusual section of American society [Laughter].