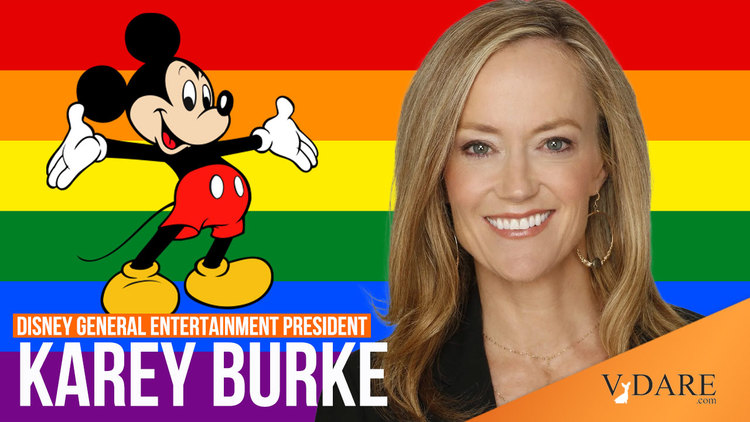 JOHN DERBYSHIRE: Is Disney’s Karey Burke A Space Alien? The Ruling Class Have Plans For Your Children (If You Have Any)

Child raising is stressful. From a coldly anthropological point of view, it's amazing the number of different systems that human beings have come up with to alleviate those stresses, from widespread infanticide to modern modes of education.

I won't dispute that modern modes of education are preferable to infanticide. That said, I can't think of anything else about them that is clearly positive.

At one end of the Ed Business, state legislators are having to pass laws to prevent little tots in elementary school being indoctrinated with crackpot theories about sex and race [Governor Ron DeSantis Signs Historic Bill to Protect Parental Rights in Education, FLGOV.com, March 28, 2022]. Those theories teach the tots that sex is just an illusion, that you are whatever sex you think you are today.

Race, they teach, is likewise an illusion, except—somehow—that white people carry a sort of virus called "whiteness," which is evil and oppressive of nonwhite people. Last week, I quoted you the abstract of an article in a journal for professional educators. The abstract concluded with the statement that

We hope our work contributes to Critical Whiteness Studies' goal of dismantling whiteness.

That particular journal, Physical Review Physics Education Research [Tweet them], is for teachers of physics, which I guess is probably not on the elementary-school curriculum, except perhaps in China. There is not much doubt, though, that our five-, six-, seven-, and eight-year-olds are in the daily care of people who take this gibberish to be Holy Writ.

That's one end of the Ed-biz spectrum. At the other end, that same crackpot ideology is supreme. Credentialed, tenured professors at universities of the highest repute propagate its dogmas with all the earnest intensity of medieval theologians teaching about Transubstantiation. Dissidents from it are howled down and assaulted at our most prestigious, most expensive colleges [A Violent Attack on Free Speech at Middlebury, by Peter Beinart, Atlantic, March 6, 2017].

And those colleges don't just preach anti-white dogma, they practice it. Almost all of them discriminate flagrantly against white people in their admissions processes [The Myth of American Meritocracy, by Ron Unz, American Conservative, December 2012 (PDF)]. They also discriminate against Asian applicants, although that at least is being litigated [Asian-Americans Fight Back Against School Discrimination, by Jason L. Riley, WSJ, March 1, 2022].

And the connection between those two ends of the spectrum is a direct one. Our universities inspire, and very often actually contain, the Schools of Education to which young adults who have failed to distinguish themselves as undergraduates direct their steps.

Some of these young adults, I am sure, are idealistic in their keenness to shape children's minds by filling them with the ideology hammered into their own heads by college teachers with impressive credentials. Others are opportunists, attracted to a line of work that offers long summer vacations and the protection of our most powerful labor unions, before whom state legislatures grovel and beg.

Scanning the entire educational spectrum, it's hard to avoid the conclusion that our system of education is rotten from kindergarten up through to graduate school. Given a choice, you wouldn't want anything to do with it.

Here we get back to Morland's Trilemma: countries have three options, of which they may only choose two:

Americans are, in fact, given a choice. The choice is to accept or reject Option Three in the trilemma.

You can hand off your kids to the education system; or—unless you are talented in some very remunerative way, or the heir to a large inheritance—you can forget about you and your spouse both enjoying well-paid careers and resign yourselves to comparative poverty while you give over your time and energy to raising your kids in a way that does not fill their heads with poisonous nonsense.

But I may in fact have overstated Americans’ options there. Yes: you can, if you're willing to make the sacrifices, shield your kids from the educational system.

The Ruling Class who promote this sinister ideology are ahead of you, though. They haven't just taken over the schools, they also have the corporate world firmly in their grasp, including that subset of the corporate world that produces entertainment for children.

The Walt Disney Company, for example. Not merely "for example," in fact, as Disney owns or part-owns a huge slab of the corporate world offering entertainment and instruction to our children, from Marvel Comics to National Geographic.

Longtime readers of VDARE.com have known for years that Disney is a ruthless enemy of America's Middle Class. At least as far back as April 2015 we were reporting on the cold-blooded way Disney was laying off IT employees en masse so that they could replace them with cheaper foreigners on guest-worker visas.

Sample quote from that report of seven years ago, lest we forget:

From the perspective of five laid-off Disney IT workers, all of whom agreed to speak on the condition of anonymity, Disney cut well-paid and longtime staff members, some who had been previously singled out for excellence, as it shifted work to contractors. These contractors used foreign labor, mostly from India. The laid-off workers believe the primary motivation behind Disney's action was cost-cutting. "Some of these folks were literally flown in the day before to take over the exact same job I was doing," said one of the IT workers who lost his job. He trained his replacement and is angry over the fact he had to train someone from India "on site, in our country."

"Our country"…yeah, right. The way these corporate hegemons see it, it's not our country, Bub, it's their country.

No surprise then that Disney is out at the head of the wolf pack seeking to destroy our children's innocence and replace it with a bogus and godless pseudo-religion. 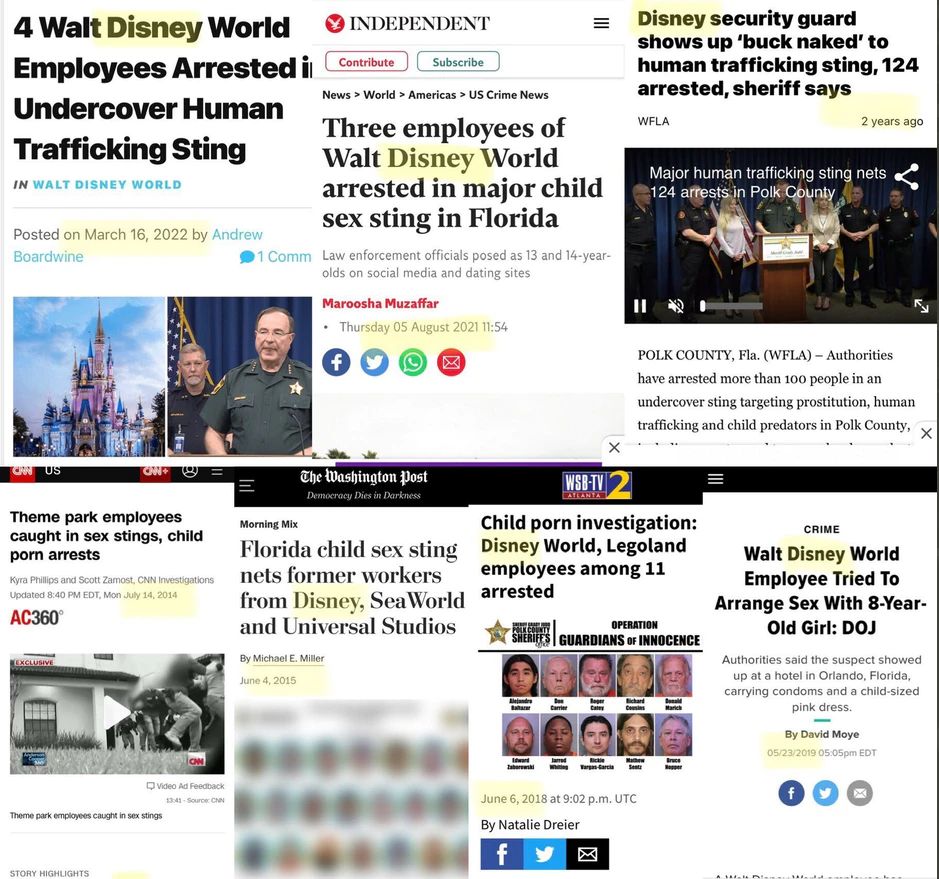 Why Does Disney Hire So Many Pedophiles?, by Emerald Robinson, Substack, April 1, 2022

Just look at this. It's rather long, I'm afraid, but I have to give you the whole thing to put across the mentality of the speaker. Here we go.

I'm, I'm sheer [sic] as a mother of, of two queer children, actually, um, ah, one transgender child, um, um, and one pansexual child, um, and also as a leader. Um, and that was the thing that really got me because I have heard so much from so many of my colleagues over the course of the last couple weeks, um, in open forums, through emails and phone conversations, and … um, I feel a responsibility to speak, not just for myself but for them. Er, to all of us …

We had an open forum last week at twentieth where, um—again, the home of really incredible groundbreaking LGBTQIA stories over the years—where, um, one of our execs stood up and said, "You know, we only have a handful of queer leads in our content," and I went, "What? I … That can't be true!"

And I, and I, and I realized, oh! It, it actually is true. We have many many many LGBTQIA characters in our stories, and … and, and yet we don't have enough leads. Erm, and narratives in which gay characters just, just get to be characters, um, and not have to be about gay stories.

And so that was very eye-opening for me. Um, and, and I, I can tell you, um, it's something that I feel, perhaps had this moment not happened, um, I as a leader, and me as my colleagues would not have focused on. And, and going forward I certainly will be more [unintelligible]. I know that we will be, and, um, and I hope this is a moment where … Shoot! Um, the fifty percent of the tears [laughs] Sorry! … are coming. Um … er … We don't, we just don't allow each other to go backwards.

SCOOP: Disney corporate president Karey Burke says, "as the mother [of] one transgender child and one pansexual child," she supports having "many, many, many LGBTQIA characters in our stories" and wants a minimum of 50 percent of characters to be LGBTQIA and racial minorities. pic.twitter.com/oFRUiuu9JG

Who was that speaking, do you think? Some midwit kindergarten teacher straight out of Ed School? No; that was Karey Burke, 55 years old, longtime producer and executive in entertainment media, former president of 20th Century Fox Television Inc., currently president of Disney General Entertainment Content.

In the world of producing entertainment for kids, the speaker there is a very big playah. She, and a lot of people like her at Disney, are shaping the minds of rising generations [Disney’s Institutional Capture, by Ethan L. Clay, Quillette, March 29,  2022].

I'm assuming, of course, that she and they are actual people—not space aliens planted among us to soften up the human race for eventual colonization and slavery.

In 2019, Disney acquired The Simpsons, including these two fellows, Kang and Kodos: 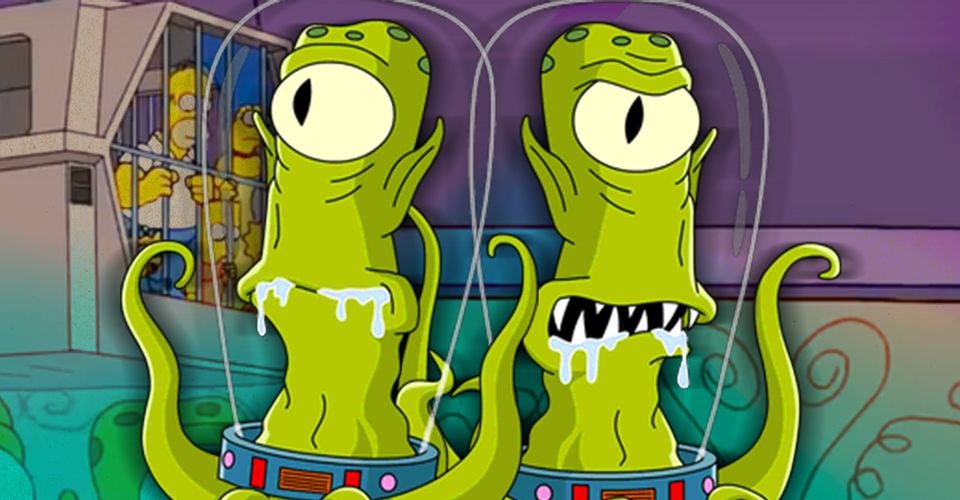