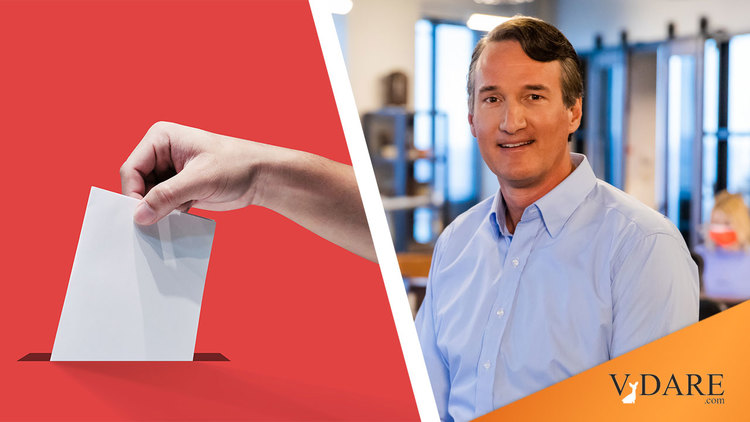 Yes, Virginia, It Was A White Backlash: Representing 73% Of Voters, 62% Of Whites Voted For The Republican Candidate, Glenn Youngkin Exit polls provided by the Washington Post from the 2021 election for Virginia’s governor make clear: this was totally a white backlash, largely centered around the anti-white racist hate spewed via Critical Race Theory that more and more noticed being promulgated by teachers as they watched their children’s Zoom broadcasts during the pandemic.

Whites were 73% of voters in this election and:

It’s not hard: in a state where nearly 3/4ths of the votes cast are by whites, all you have to do is increase the white turnout, because trying to increase the Hispanic share (representing only five percent of votes cast) will only bring negligible increases. And blacks, who voted 86% for the Democrat, represent only 16 percent of the voters in 2021.

White people are the reason Youngkin is the governor-elect in Virginia. And here’s the white pill: there’s room to grow the white percentage of the vote as well. This is why Alabama and Mississippi are so solidly red, because of the incredibly high percentage of whites who vote for the GOP. Virginia in 2021 shows the blueprint moving forward.