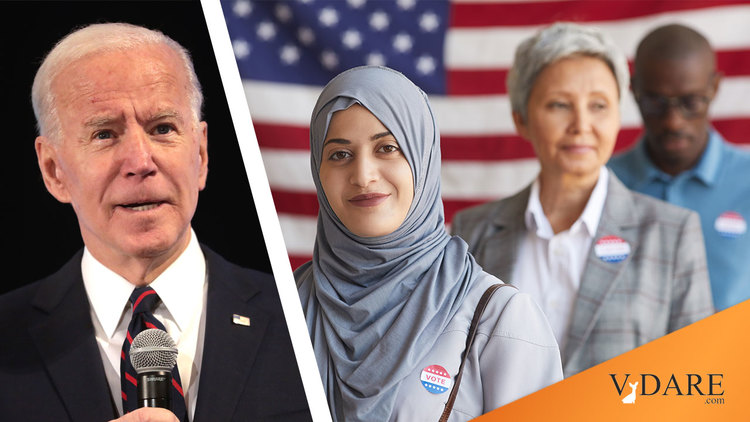 President Biden’s botched withdrawal from Afghanistan hasn’t just invited demands to resign and threats of impeachment from Republicans [McCarthy leaves door open to Biden impeachment for Afghanistan bombing, by Maria Schultz, Fox News, August 27, 2021]. Even crucial Democrat allies and the leftist Mainstream Media have treated him to the most vociferous criticism. Biden showed remarkable independence in pulling out, as he has on other issues—except the one of most import to VDARE.com readers: immigration. On that, Open Borders is the only policy he can and will pursue, even though it could mean political disaster in the 2022 midterms, and possibly the 2024 presidential contest. The Democrat-Main Stream Media Complex refuses to allow any deviation—because of its fanatical zeal to Replace the Historic American Nation.

Biden’s inaction on the ongoing border crisis shows just how aligned he is with the Treason Lobby. His top underlings admit the border is a disaster. “If our borders are the first line of defense, we’re going to lose and this is unsustainable,” Homeland Security Chief Alejandro Mayorkas told Border Patrol officials earlier this month. “We can’t continue like this, our people in the field can’t continue and our system isn’t built for it” [Mayorkas says border crisis ‘unsustainable’ and ‘we’re going to lose,’ by Edmund DeMarche et al., Fox News, August 13, 2021]. But that admission hasn’t changed a thing.

Just about the only thing Biden has done on the border: enforce Title 42, a provision of the law that allows border agents to deport migrants with the China Virus immediately. The regime took a lot of flak from the Left for doing it, even though the one reason it continued the Trump-era policy was fashionable fear in other quarters of the Left about the pandemic. The usual Leftist groups have sued Biden to revoke the policy [ACLU, Other Groups Resume Lawsuit Seeking to End Title 42 Border Order, by Claire Hansen, US News, August 2, 2021].

Title 42 isn’t the only policy leftover from President Donald Trump that will help Biden exert some measure of control over the border. The other is January 2019’s “Remain in Mexico” order. Those who traveled to the southern border and claimed asylum would have to wait outside of the country as applications were processed. Biden promised to end it, and did, one reason we’ve seen the deluge at the border. Every asylum seeker knew he could stay in America while his application was processed. Success was unimportant. Once in the country, he’s here to stay. Mission accomplished.

But the courts came to Sleepy Joe’s rescue. Federal Judge Matthew Kacsmaryk, a Trump appointee, ruled that Biden violated the spirit of federal immigration enforcement. Kacsmaryk ruled that illegals who sought asylum have two options: detention or “return to a contiguous territory.” For the United States, that’s Mexico. The Supreme Court upheld the opinion last week. If Biden resumes enforcing the policy, perhaps the tsunami of illegal aliens at the border will subside at least a little.

Ethnic lobbies and Leftists resolutely oppose Remain in Mexico, of course, and have called the SCOTUS decision racist and “dangerous” [A new Supreme Court case could blow up decades of US diplomacy, by Ian Millhiser, Vox, August 24, 2021]. But sources tell me the regime is secretly relieved SCOTUS acted because it settled the matter for now. Biden can reverse course and blame the courts for ordering him to uphold it. Except for Title 42, the regime couldn’t enforce immigration law or secure the border on its own initiative without rupturing the party.

A similar situation is now unfolding with Afghan refugees. Biden accepted them all only reluctantly because of the crisis at the border and he feared a political backlash. He wanted to send them to other countries. But the Mainstream Media and the Left prevailed—with help from the usual GOP suspects, such as Senator Ben Sasse—and so Biden will welcome at least 60,000 Afghan refugees this year. Leftists still vented about the administration’s reluctance to take tens of thousands of unvetted refugees from a terrorist hub.

“It’s like they want the credit from liberals for ending the Trump cruelty to immigrants and refugees but they also don’t want the political backlash that comes from actual refugees arriving in America in any sort of large numbers,” an administration official told Politico [Afghanistan blame game, by Alex Thompson and Tina Sfrondeles, August 16, 2021]. Washington Post columnist Catherine Rampell chastised Biden for his apparent “cowardice” in caving to “bigots” [Biden shouldn’t cave to the bigots on evacuating our Afghan allies, August 19, 2021].

Of course, Biden didn’t “cave” to bigots. He’s still doing what the Left wants. No matter. Even contemplating a challenge to leftist orthodoxy on refugees demanded retribution

Pressuring Biden works. Earlier this year, he announced he would keep annual refugee intake at the historic low left by Donald Trump, despite a campaign promise to increase it to more than 60,000. The reason was obvious. The border crisis depleted all the resources and packed all the facilities available to accommodate the endless hordes. The Left was unmoved and swiftly complained. Burbling something about “America’s values,” Biden caved and lifted the number to 62,500 [Heeding complaints, Biden lifts refugee cap to 62,500, by Mica Rosenberg and Steve Holland, Reuters, May 3, 2021].

Yet Biden seems capable of withstanding criticism and standing his ground, as the pullout from Afghanistan showed. Polls show the American people think he badly managed the withdrawal, and they want something to change. But Biden stuck to his plan and defended his decision [Overwhelming bipartisan support for keeping troops in Afghanistan, by Quinn Scanlan, ABC News, August 29, 2021].

So what makes immigration different? Why won’t Biden budge? Certainly not because of popular support for Open Borders. Throughout his presidency, voters have consistently given him low marks on the border. Clear majorities of those polled want more border security and enforcement. At the moment, Biden’s handling of immigration ranks as low as his handling of Afghanistan. Only 25 percent of surveyed voters approve.

The only rational explanation for refusing to moderate, despite widespread public concern about the border crisis, is that Biden and his party believe unfettered immigration is their ticket to permanent political power. Senate Majority Whip Dick Durbin recently said it out loud:

The demographics of America are not on the side of the Republican party. The new voters in this country are moving away from them, away from Donald Trump, away from their party creed that they preach.

[Senate Democratic Whip Claims Demographics ‘Are Not on the Side of’ GOP, by Caroline Downey, National Review, July 19, 2021]

The “new voters” are refugees, asylum seekers, and illegal aliens who will be Amnestied if the Democrats get their way. They know they can transform the country demographically with foreigners. That’s why they settle refugees in white rural towns in battleground states. It places future Democrat voters in areas they don’t control now … but soon will, once the “new voters” are naturalized. (Frighteningly, 10 GOP governors want Biden to resettle refugees in their states. That’s why it’s called the Stupid Party.)

Thus, Biden and the Democrats are willing to risk elections short-term, knowing they can win long-term. That’s why, for instance, the party is so firmly committed to the sneak Amnesty in the budget bill. It gives 8 million to 10 million illegal aliens a pathway to citizenship—and increases taxes to pay for it.

Moderate Democrats reasonably fear the Amnesty will cost them their seats in 2022. But party leaders tell them to grin and bear it for the sake of the party. Biden and House Speaker Nancy Pelosi know the illegals will be loyal Democrats once they get citizenship. So will their children. Losing a few seats in 2022 won’t matter in 2040.

Even though the Regime Media is keeping immigration out of the headlines—apart from Afghan refugees--this issue is guaranteed to be one of the defining issues of 2022 and 2024. The border crisis will continue as long as Biden encourages illegal migration and does nothing about immigration enforcement. Americans will still disapprove of the president’s job. They will also start to see the negative effects of Afghan refugee resettlement and probably demand a reversal from their elected officials.

If Biden were smart, he would limit Afghan refugee intake and re-implement most of Trump’s immigration enforcement mechanisms. He would pull back from the Amnesty push until the border calms down so he can make a better pitch to the nation.

But he can’t do that. Any divergence from Open Borders orthodoxy is bigotry. The Left has bet the farm on Electing A New People, and it’s not wavering now.