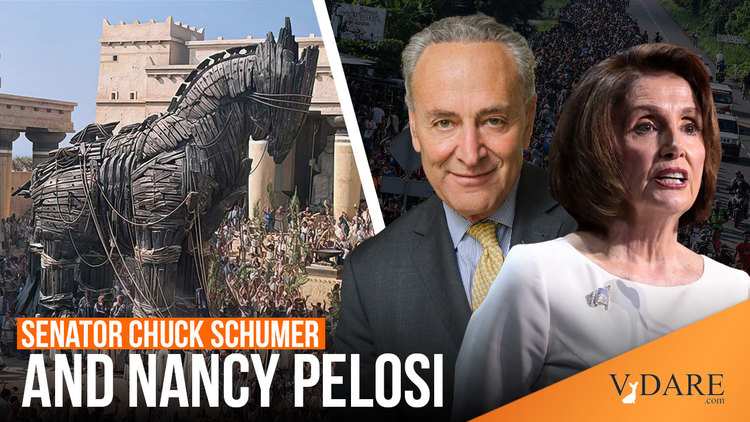 The Democrats aren’t satisfied with a mere $1 trillion infrastructure bill. They still want to enact a $3.5 trillion budget bill that smuggles in an illegal-alien Amnesty. Chuck Schumer ‘s Senate approved a blueprint resolution of this Trojan Horse bill last week [Senate Passes $3.5 Trillion Budget Plan, Advancing Safety Net Expansion, by Emily Cochrane, New York Times, August 11, 2021]. Because it’s a budget bill, that means when Nancy Pelosi’s House of Representatives passes its version, a simple majority in the Senate could send the bill to President Biden’s desk—if the Senate parliamentarian allows this dirty trick. Democrats openly tout the bill as a radical transformation of the country. They’ve gone full Angela Merkel. But it still might not pass if the GOP stays firm and Democrat “moderates” withhold support.

Nineteen Republicans backed the $1 trillion infrastructure bill despite its many problems [Senate Republicans Approve Racial Quotas, Migration Incentives for Broadband in Infrastructure Bill, by John Binder, Breitbart, August 10, 2021]. Among other Woke initiatives, it would impose racial quotas on “broadband access.” Republicans tried to make the bill more tolerable by adding mandatory e-Verify for companies that receive federal funding, but Democrats squashed that idea [53 Senators Vote to Ensure Infrastructure Bill Jobs Go to American Workers, Andrew Arthur, Center for Immigration Studies, August 6, 2021]. However, the infrastructure bill will go through the normal legislative process and require 60 votes to overcome a filibuster. That’s why it’s less horrible than the $3.5 trillion budget bill.

The Democrats want to put that one through by reconciliation, which allows it to avoid the filibuster if Senate parliamentarian Elizabeth MacDonough, right, considered fair by both Republicans and Democrats, finds the Amnesty germane to the budget. Recall that she rejected the inclusion of a minimum wage hike in a stimulus bill earlier this year [Senate parliamentarian rules $15 minimum wage cannot be included in relief package, by Sarah Mucha, Axios, February 26, 2021]. It’s unclear whether she will OK a massive Amnesty in a purported budget bill, but Democrats are going to try anyway.

The specifics aren’t yet outlined, but it’s believed the Amnesty will be a “path to citizenship for the majority of illegal aliens here. Bloomberg’s Laura Litvan reported last month that it would cover eight million illegals [Democrats Eye Legal Path for Some Undocumented Immigrants, July 26, 2021]. Last week, The Hill reported that it would cover roughly 10 million illegals [Budget Package Includes Plan For Pathway to Citizenship, Green Cards for Millions, by Rebecca Beitsch, August 9, 2021]. Drafters of the bill have previously stated that it will cover “DREAMers,” illegals who came to the U.S. allegedly as minors, illegal “essential workers” (primarily in agriculture), and those here on Temporary Protected Status.

The legislation apportions $107 billion for Amnesty. Earlier reports have suggested the bill would include money for border “infrastructure,” but it’s unclear if that’s still in the framework. When it returns from recess later this month, the House will decide whether to keep that one bone for moderates.

This much is clear: The bill is designed to remake America. A recent NPR broadcast said it would “reshape the role of the federal government in American life” [NPR News Now, August 11, 2021, MP3]. The New York Times’  Emily Cochrane pegged it this way: “the greatest change to social welfare since the 1960s’ Great Society” [Senate Passes $3.5 Trillion Budget Plan, Advancing Safety Net Expansion, August 11, 2021]. But again, the Democrats don’t want a mere budget bill. It’s not just a “social welfare” bill. It’s a Trojan Horse to smuggle 10 million (at least) illegals onto the voter rolls who can help replace the Historic American Nation.

Here’s how committed the Left is to this bill. Though they already have an infrastructure bill that can pass Congress the normal way, that isn’t good enough. House Speaker Nancy Pelosi wants to advance both bills simultaneously to ensure the passage of the second. She won’t permit a vote on the first bill until the Senate votes on the completed budget bill.

Democrat moderates are hesitant. But the $3.5 trillion bill better advances the Leftist Great Replacement and is thus the greater priority for them [Democrats’ divisions could still derail infrastructure bills, by Hugo Lowell, The Guardian, August 15, 2021].

While details are scant, the Amnesty provisions in the second bill includes measures in two bills the House passed in the spring. One gave Dreamers a path to citizenship, the other legalized illegal agricultural workers. Those would mean Amnesty and eventual citizenship for 4 million illegals—2.5 million DREAMers and over 1 million illegal farm workers [House Votes to Give Millions of Dreamers and Farmworkers a Path to Citizenship, by Nicholas Fandos, New York Times, March 18, 2021]. The budget bill aims to double that number.

Overstating how dramatic and dangerous this would be is nearly impossible. Amnesty would effectively be passed at a time when more than 1 million illegals have already streamed across our border since October 1 ... prior to Amnesty. Now imagine the mad dash if this bill passes.

Homeland Security admits that the border crisis is unsustainable and they’re losing the battle [Mayorkas Says Border Crisis ‘Unsustainable’ and ‘We’re Going to Lose,’ by Edmund DeMarche et al., Fox News, August 13, 2021]. But even that admission isn’t persuading the Biden Regime to change its border policy. Title 42, which allows authorities to immediately deport illegal migrants on medical grounds and was the one security measure the Regime left in place, is barely enforced. The Regime is still releasing thousands of migrants into the U.S. and curtailing deportations. Some have the WuFlu [Texas border city says more than 7,000 COVID-positive migrants released since February, 1,500 in last week, by Fox News, August 4, 2021]. Yet no top Democrat has called for more border security or more funding for immigration enforcement.

The plain fact is that the Democrats are absolutely committed to erasing the Historic American Nation. They know that, right now, they have the institutional power and cultural clout to ram through any radical proposal they want. For instance, Biden recently used executive power to extend an eviction moratorium, despite admitting it was likely unconstitutional. However, U.S. District Judge Dabney Friedrich—a Trump appointee!—ruled last week that the president could do so [Eviction Moratorium Left in Place by Judge Despite Legal Doubts, by Brent Kendall, Wall Street Journal, August 13, 2021].

This same power has been used before in the service of mass immigration and demographic displacement. Pelosi’s tying the two bills together demonstrates the Democrats’ priority. They would risk killing a “bipartisan” bill at least nominally aimed at infrastructure to make a point about their determination to make America less white.

The Amnesty bill isn’t guaranteed to pass, however. Even apart from the Senate parliamentarian, moderate Democrats are skittish, which explains why Pelosi insists on tying the bills together. She doesn’t want the remaining moderates to flake out.

But at least two Senate Democrats are getting cold feet anyway. Arizona Sen. Kyrsten Sinema said last month that she opposes the $3.5 trillion bill because it’s too expensive. West Virginia Sen. Joe Manchin, who previously said he supported reconciliation to pass Amnesty, isn’t thrilled either. As the New York Times’ Cochrane reported, he warned of the “grave consequences facing West Virginians and every American family if Congress decides to spend another $3.5 trillion.”

Sinema and Manchin voted for last week’s resolution, but that doesn’t guarantee their vote for the actual legislation. Pelosi hopes to strong-arm both with her legislative scheme.

The one factor that might force moderates to oppose Amnesty: the border crisis. It is not playing well for Democrats in the polls and vulnerable lawmakers might well decide that their electoral fortunes depend on opposing Amnesty. With the help of Republicans, moderate Democrats might demand border security amendments. That could kill the bill, because Leftists have fanatically opposed any modicum of border security or enforcement in exchange for Amnesty. That’s why they prefer reconciliation; compromise and concessions are unnecessary.

Republicans can’t do much more at the moment than offer poison pills to kill the legislation. But if they can’t sink this Amnesty now, they must look to the future and plan to revoke it. That means they must be as proactive and zealous on this issue as the Democrats, and promise to overturn it if they retake control of Congress.

There is precedent. Trump revoked Deferred Action for Childhood Arrivals as president and he was only overruled by the courts. (See Trump ends DACA but gives Congress window to save it,  CNN, September 5, 2017 and Supreme Court blocks Trump from ending DACA, CNN, June 18, 2020.)

Then again, aggressive litigation can succeed. Last week, U.S. District Judge Matthew Kacsmaryk, a Trump appointee, told the Biden Regime it must reinstate Trump’s Remain-In-Mexico policy, pursuant to a lawsuit filed by two GOP attorneys general, Ken Paxton of Texas and Eric Schmitt of Missouri. Among other things, the judge ruled, Biden’s Open-Border policy is imposing injurious costs on the two states. Biden will appeal, of course, but the lesson is that litigation can work.

ANOTHER VICTORY!
We just won our second immigration lawsuit against the Biden Admin! They unlawfully tried to shut down the legal and effective Remain-in-Mexico program, but #Texas and Missouri wouldn’t have it.

Together we sued, and just handed Biden yet another major loss! pic.twitter.com/Tcxte8gF6H

: Sorry, that page does not exist

Republicans must also call for the end of Birthright Citizenship, which would help shut off a “migrant” magnet and make it harder for illegals to obtain a foothold here.

Democrats know their best opportunity for an Amnesty is right now. They could easily lose control of Congress in 2022. This might be the Treason Lobby’s last, best chance to legalize millions of illegals.

Good thing is, Republicans are far more opposed to Amnesty now than they were in 2013. No Republican dares support Biden’s “Comprehensive Immigration Reform.” Yet they can’t simply react. The GOP must attack, think outside the box, and propose serious solutions to counter the Democrats’ Great Replacement.

The future of the GOP/GAP and of the Historic American Nation is at stake.