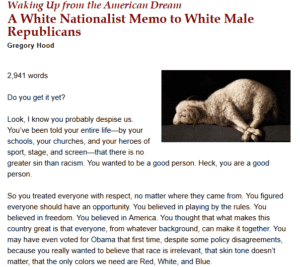 After the re-election of President Barack Obama in 2012, a writer on the then-obscure Alt Right wrote a piece arguing that whites should no longer consider themselves “American.” Gregory Hood asserted “George W. Bush was probably the last Republican President this country will ever see.” But now we have Donald J. Trump—does that mean Hood’s general analysis was wrong?

After chronicling the sad state of culture and politics in modern America and the overt anti-white hatred confidently expressed in what was once a Western nation, he concluded: 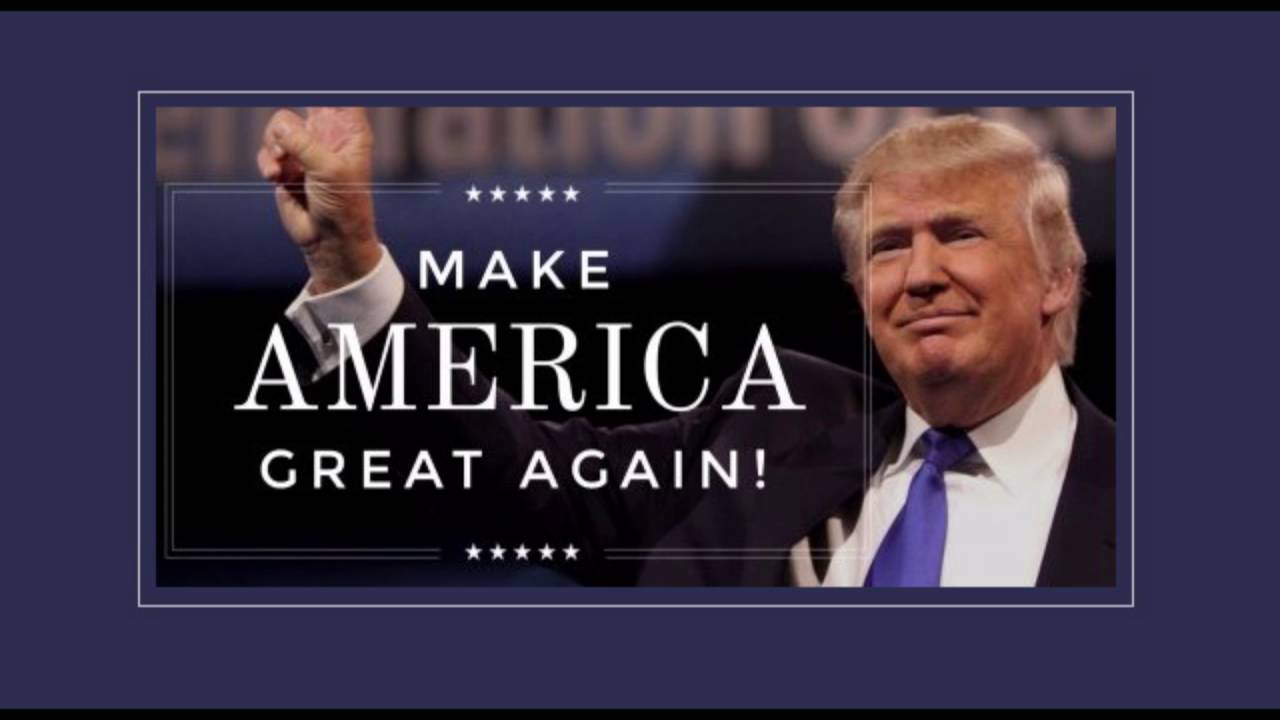 Now, it is the Left, almost entirely defined by its opposition to the Historic American Nation and its core European-American population, that wants out. There is a movement for California secession. The Huffington Post, of all places, also published an article calling for the dissolution of the union and the formation of what is, in essence, a white ethnostate to keep the evil racists away [A ‘Safe Space’ for white people, otherwise known as ‘the two-state solution,’ or ‘disunion as solution,’ by Dana Beyer, Huffington Post, November 25, 2016].

Of course, cries for secession after defeat are not new. Slate even called for the North to secede from the Union way back in 2000, after the election of George W. Bush. It sneered:

Economically and socially, secession will be painless for the North. The South is a gangrenous limb that should have been lopped off decades ago. 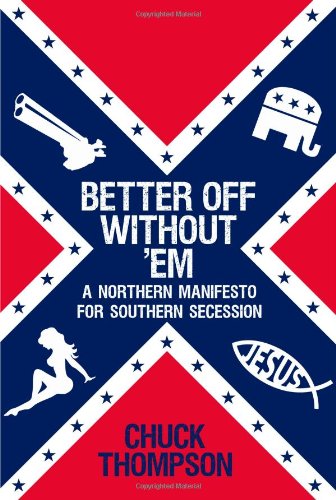 Much of this is simply driven by politics. But there is also an undeniable cultural element centered on the issue of immigration.

Years after the courts sabotaged Proposition 187, California has been remade into a de facto Latin American state with a shrinking middle class, extreme income inequality, and an enormous criminal alien population. Defending these invaders is cited as one of the justifications for secession by #CalExit activists: “California is the most diverse state in the United States and that is something we are proud of,” boasts YesCalifornia.Org.

Before the American Civil War, the South was largely in control of the direction of the American polity, spearheading a drive towards national expansion and the seizure of new territory. When the South began to lose control over national politics and the institution of slavery (and thus its economy) was threatened, secession became a more attractive option. (At the risk of falling into the “Democrats Are The Real Racists” mantra, we could say the same thing about California’s plutocrats and their cheap labor today.)

Today, what is occurring in contemporary America is similar. Different regions of the country are dominated by widely disparate populations with divergent economic and cultural interests. Though economics is behind many of these divides, there also an undeniable ultimately a racial undercurrent.

The Clinton campaign exemplified the union of Wall Street with Leftist identity politics. As Hillary put it:

But this “New Democrat” model of Progressivism met its nemesis when the white working class of the Rust Belt turned out to defeat it in record numbers. Van Jones, once a communist revolutionary, now (funny how this works) a featured CNN pundit, called it a “whitelash.”

There has been some soul-searching among Progressives and their allies in the Main Stream Media about some kind of outreach to Middle American workers. This is what animated Ohio Congressman Tim Ryan’s quixotic challenge to Nancy Pelosi for leadership of the House Democrats. But San Francisco wine estate owner Pelosi easily won [Nancy Pelosi re-elected as House Democratic leader, by Deirdre Walsh, Tom LoBianco, and Manu Raju, CNN, November 30, 2016].

Experienced woman beats less credentialed man for job she's worked her arse off for. See? It can happen in America! https://t.co/DbMWsWfC7H

As Hood observed after the 2014 elections—another Republican victory which was called the “revenge of the white man” by liberal commentators—the Democrats are committed to anti-white politics even when it hurts their interests:

The problem is that anti-white identity politics are now so central to Progressive ideology that it has overwhelmed issues of class and income inequality. Even the Occupy movement quickly collapsed because it insisted on Byzantine discussion about racial privilege rather than focusing on issues that could rally white workers. And the Democrats’ dependence on black turnout will necessitate more Ferguson-style race-baiting, which will result in the kind of rioting and violent rhetoric that will force European-Americans to take a side in the racial Cold War, even if they don’t want to.

Thus, we get these MSM articles denouncing Trump’s supporters: And so many more.

Democrats are not opposed to ethnic separatism—as long as this racial nationalism is for non-whites. Thus one of the leading candidates to take over the Democratic National Committee is Keith Ellison, who, in the past, endorsed a black ethnostate. No other members of the Black Congressional Caucus disavowed this (and Congressman Hank Johnson seemed to have some agreement with it).

Ellison is currently under fire for his past, but not because of his black ethnostate endorsement. Indeed, a “long, comprehensive dive” into Keith Ellison’s past from  Andrew Kaczynski [Email him] (once of Buzzfeed, now of CNN), does not even mention Ellison’s black nationalism (a term I am using not as a pejorative, but as a factual description). Instead, Kaczynski expresses SHOCK! HORROR! about the student Ellison defending the right of anti-Semitic blacks to speak on his University of Minnesota campus in 1990. [Rep. Keith Ellison faces renewed scrutiny over past ties to Nation of Islam, defense of anti-Semitic figures, December 1, 2016]. However, Kaczynski shows no scruples in calling VDARE.com a “white nationalist site” (sigh).

The double standard can only be upheld for so long, especially when white racial consciousness is being forced on American whites. Even when they want to “not see race” and just “be American,” the logic of concepts such as “white privilege” means that all white people either need to be consciously self-hating, complete hypocrites (= most upper class liberals); or start standing up for their own collective interests (=implicitly, Trump voters).

Even Leftist reporter Olivia Nuzzi of the fanatically anti-white Daily Beast has admitted:

at a certain point liberal concern about "cultural appropriation" begins to sound like white nationalism https://t.co/rd9oicursv 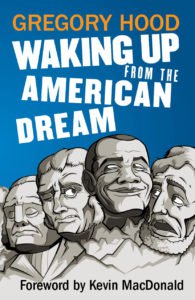 As Hood’s White Nationalist Memo foretold and as he subsequently explained in his 2016 essay collection Waking Up From The American Dream, the core American ethnos of European-Americans may give up on America itself. Even at a moment of victory, Lawrence Murray, one of the Alt Right’s contemporary leading voices, is already plotting how whites can break free of the country and form a “free state.” [Amerikaner Free State, TheRightStuff.biz, November 23, 2016]

And why shouldn’t they? Ultimately, America has been deconstructed culturally and is on the brink of being dissolved demographically. Why would European-Americans accept being reduced to the status of a powerless minority in the country they, more than any other group, created?

For those who want to keep America together, what is needed is a common identity, a preservation of the ethnic core, and a sense of civic nationalism that is not entirely identified with racial heritage but explicitly rejects the anti-white fanaticism which defines the entire American Left.

This requires a halt on immigration—so we can assimilate those migrants who are already here.

Put another way: for those who want America to stay together, they had better hope that Donald Trump (“The Last American ” said Hood before the primaries began) can succeed.

If he can’t, there’s no reason to expect that “American Exceptionalism” will make post-1965 Immigration Act America immune from the usual catastrophic fate of multinational empires.