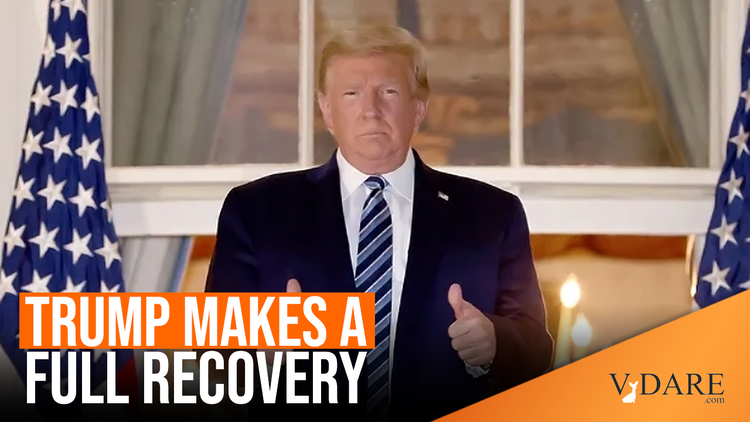 President Donald Trump projected strength, authority, and leadership after he recovered from COVID-19. The optics were undeniably impressive when President Trump dramatically removed his mask and saluted Marine One. The resulting meltdown of the Main Stream Media / Dem Complex was amusing. Those may not be the values our fallen country wants in a leader anymore. But they’re what we need.

One could palpably sense the MSM and the entertainment industry’s disappointment when President Trump didn’t die. Actor Jim Carrey, whose Twitter feed is practically deranged, “joked” about “science and karma” teaming up to show the danger of the virus [SNL doesn’t hold back on jokes about Trump’s COVID-19 diagnosis: ‘There’s a lot funny about this,' by Emily Yahr, National Post, October 5, 2020]. (There’s similar morbid anticipation about Stephen Miller, who was just diagnosed with COVID-19 and who we hope recovers quickly [Stephen Miller tests positive for COVID-19, by John Bowden and Brett Samuels, The Hill, October 6, 2020]).

But of course no one would ever dare “joke” about Ruth Bader Ginsburg, or for that matter the sainted George Floyd, unless you were unconcerned about your economic and physical safety.

Nonetheless, our president, a relatively old and undoubtedly obese man who is not noted for his healthy diet or exercise habits, beat the disease with relative ease over a weekend—apparently in part thanks to the Remdesivir treatment.

He returned in typically Trumpian style, flying back dramatically to the White House on Marine One and then saluting the Marines from the balcony [Trump back at White House after being discharged from Walter Reed, by Melissa Quinn et al., CBS News, October 6, 2020]. Trump also spoke against letting the virus “dominate” your life.

The optics were undeniably impressive. Aesthetics are an important part of governance, as great leaders have known from the beginning. 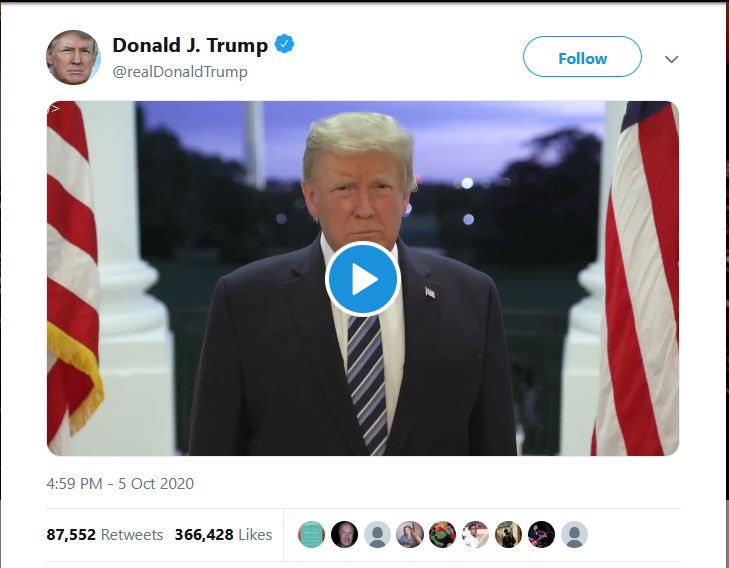 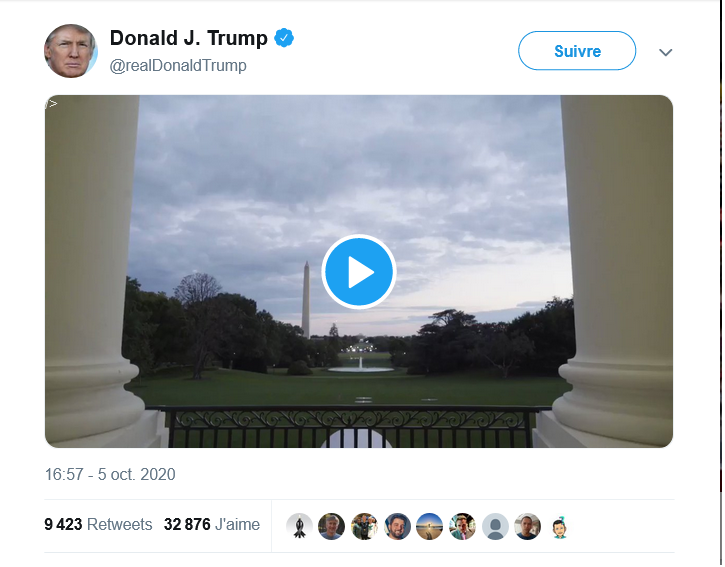 Needless to say, this led to cries of fascism and authoritarianism. Apparently, using a balcony is now itself quasi-fascist, though every president has done it since Truman built the thing in the Fifties.

And President Trump stripped off his mask while on the balcony, which itself triggered countless hit pieces.

Of course, there’s no point to wearing a mask when you are by yourself, outside, at your own residence. It would be like wearing a mask in a car by yourself—which, for some reason, some people do. Such antics are either virtue-signaling or, if imposed, a humiliation ritual. The latter may be the point [Commentary: The media’s insane reaction to Trump’s balcony appearance proves that they WANT you to live in fear, by Leon Wolf, The Blaze, October 6, 2020].

There’s also a tremendous amount of hypocrisy involved. Chris Cuomo (Andrew Cuomo’s younger, less successful brother) ranted and swore about the president’s actions in an embarrassing on-air display. However, Cuomo himself broke quarantine when he had COVID-19, and even managed to get into an altercation about it while outside and on the street [Chris Cuomo ripped over hypocrisy of mocking Trump’s White House return, by Lee Brown, New York Post, October 6, 2020].

Needless to say, the MSM has the ability to not merely tolerate but to essentially suppress unpleasant truths, notably Chris’s brother Andrew Cuomo’s mismanagement of the outbreak in New York [In Worst-hit Covid State, New York’s Cuomo Called All The Shots, by Jimmy Vielkind, Joe Palazzolo, and Jacob Gershman, Wall Street Journal, September 11, 2020]. Andrew Cuomo still enjoys a very high approval rating, 59 percent overall, with 73 percent approving of his handling of the outbreak, even though he has indisputably failed [Poll: Voters Continue to Approve of Cuomo’s Handling of Pandemic, by Nick Reisman, Spectrum News, October 2, 2020].

Progressive David Sirota correctly notes that this shows politics has grown more shallow and that a politician can fail but still be popular “if you’re on television making declarative statements and if you happen to have a brother who runs a major show on CNN and get to banter with your brother on CNN” [David Sirota: Cuomo’s approval ratings shows politics is getting more and more shallow, The Hill, May 8, 2020].

This institutional MSM support is what Joe Biden depends on. His response to President Trump taking off the mask on the balcony: a tweet saying “Wear A Mask,” which received over 555,000 likes.

Similarly, Biden’s speech in Gettysburg today contained no energy and a “crowd” sitting inside social distancing circles. Though he spoke about the importance of masks, he did not wear one himself as he spoke about the need for “unity” [Biden says United States is in a ‘dangerous place’ and calls for unity in Gettysburg speech, by Eric Bradner, CNN, October 6, 2020].

Of course, there was one group left out of this “united” American people—the evil white supremacists. Biden condemned “armed militias roaming America’s streets” and said “we should have no tolerance for extremist White supremacist groups menacing our communities.”

[Biden vows not to allow ‘White supremacists to overturn the America of Lincoln, by Paul Steinhauser and Allie Raffa, Fox News, October 6, 2020]

Of course, it is not “white supremacists” burning down cities nationwide. But relatively large number of Americans, due to media gaslighting and Democrat loyalties, apparently do believe it is “right-wing radicals” who are responsible.

And Biden is not referring to the all-black “Not F*cking Around Coalition” when he condemns armed militias. This particular militia held another one of its armed protests a few days ago. It ended on a rather uninspiring note when one member was reportedly arrested after an accidental discharge [Not F*cking Around: Black Militia Protests in US over Shooting of Trayford Pellerin, by Jordan James, Politicalite, October 6, 2020].

As Steve Sailer recently noted, Joe Biden seems to be in a kind of time warp where someone other than liberal Democrats have been in charge of race relations for the last 60 years.

However, Biden’s speech also had an ominous undertone. It consisted of almost Simpsons-level cliches about being “united”—except when he began using eliminationist rhetoric about giving “no license” to “hate.”

Who defines “hate?” I’d say some of the things Leftists say about President Trump, let alone VDARE.com, are hateful.

Furthermore, the First Amendment to the United States Constitution should be “license” enough for any speech that isn’t an explicit incitement to violence, even if journalists or politicians consider it “hate.”

Perhaps Joe Biden does not literally mean that he wants to criminalize certain political viewpoints or persecute certain groups. But does anyone (even Joe Biden) truly believe he will be the person with the power in the Administration?

Joe Biden may win the election precisely because everyone understands that he won’t be running the show. He’ll simply be a front for a regime held together by banalities, invented enemies, and a viciously totalitarian Cultural Marxist order that punishes anyone who identifies with the Historic American Nation.

Biden has even called himself a “transition candidate,” someone who will pass the torch to the non-white Democrats [Biden’s comments on how long he’ll serve put spotlight on VP search, by Will Weissert, Detroit News, May 17, 2020]. These new Democrats have far fewer scruples about abandoning immigration enforcement or using the state to curtail speech.

The last few years have also shown that journalists and their Democrat allies are deeply disturbed at the idea of any person, even one elected president, challenging the bureaucracy or the administrative state. If Trump has accomplished anything, he’s forced the Deep State to reveal its hand. Many Democrats positively want the Deep State to run the show. A harmless figurehead who will “trust science” or “listen to the experts” is preferable to a man of strong will who appeals to heroic virtues…even if Donald Trump’s actions have never quite matched his aesthetic.

Unless almost every poll is an outright fraud, Joe Biden is winning and by quite a large margin. A President Biden would represent the installation of a quasi-permanent regime. Big Tech deplatforming, MSM bias, woke capitalism, and outright state repression would crush conservatives, Christians, whites, and anyone else attached to the old America.

When Biden steps aside, his handlers will intensify the tyranny. “White supremacists” will fit the role kulaks did in the Soviet Union, becoming the scapegoat for all the regime’s inevitable failures and America’s relative decline in power. Despite white “racism” having no real power, the hysteria is much higher now than it was just a few years ago, and there’s no reason to suspect it will cool off if/when the Democrats retake power.

The only thing that can oppose such an all-encompassing regime: strong personal leadership, an American Caesar. This is what many people thought they were getting with President Trump in 2016, which is why the “God-Emperor” memes were only semi-joking.

But while President Trump is clearly attached to the trappings of power, he lacks the knowledge or ability to fully use it.

We can hope that whatever American patriot leader comes next won’t be so pusillanimous about wielding state power.

Unfortunately, with the Democrats already telegraphing their intentions for sweeping constitutional and legal changes, the GOP—and the Historic American Nation—may not get another chance after November.