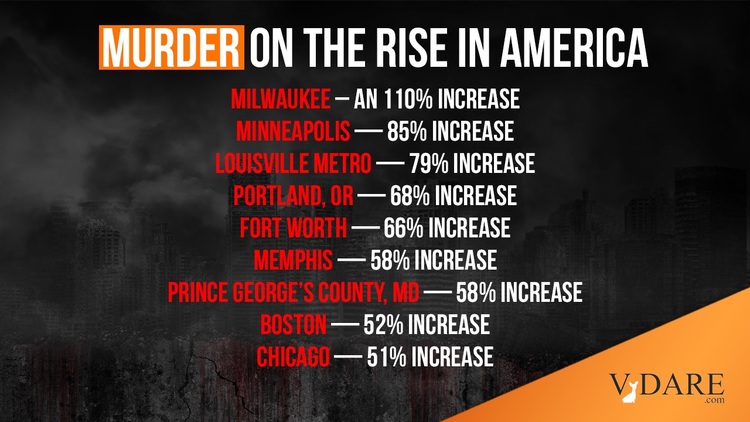 From the Police Executive Research Foundation on 11/17/2020:

Now, data compiled by PERF (with support from the Major Cities Chiefs Association) confirm another major issue confronting the police: a sharp spike in some violent crimes.

Earlier, I reported on the 28.7% homicide increase year-to-date in 67 cities scanned by the Major Cities Chiefs Association. Now, the Police Executive Research Foundation has added in data from 153 smaller agencies, up through September 30, 2020, which lowers the increase to 28.3%: in other words, the post-Memorial Day surge in killings is honor of George Floyd is very large and nationally pervasive.

… To explore whether these findings are occurring in jurisdictions of other sizes across the United States, PERF asked our members to provide data in the same format as collected by the MCCA: preliminary reports of homicides, rapes, robberies, and aggravated assaults Jan. 1-Sept. 30, 2020, and for comparison, actual data for the same period of 2019. (Because they are preliminary, the 2020 numbers are subject to change.)

A total of 156 additional agencies provided data to PERF. Thus, when combined with the 67 U.S. agencies in the MCCA report, the analysis in this Daily Report is based on data from 223 agencies of various sizes.

The breakdown of agencies by size is as follows:

The 223 agencies in PERF’s analysis reported a total of 7,158 homicides from January through September of 2020. That represents an increase of 28% over the 5,583 homicides those agencies reported during the first nine months of 2019.

So the smaller agencies saw a 24.3% increase in murders, almost as bad as in the major cities.