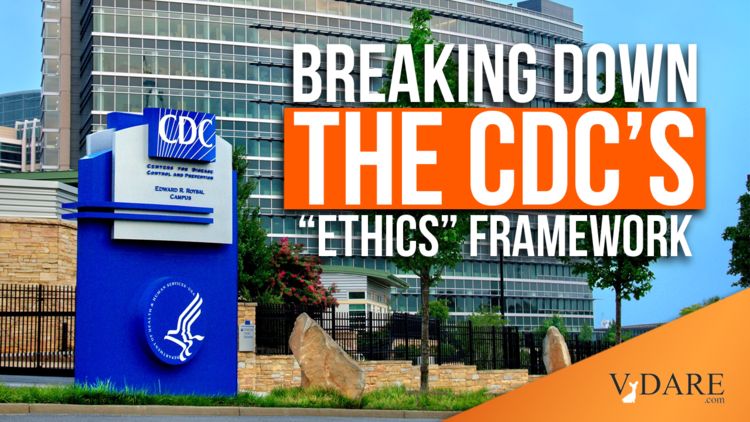 Our government’s most fundamental ethical assumption of 2020 is that Black Lives Matter more than All Lives Matter, as seen in this CDC presentation on vaccine priorities: The CDC’s advisory group’s thinking is that 21 million healthcare personnel should go first of all.

First, that’s 42 million doses, which will take into the New Year to deliver. And that’s the smallest of the four groups the CDC is thinking about prioritizing. A general criticism is that the CDC’s approach is way too ham-handed to provide much guidance during the critical early weeks of vaccine distribution during the current Third Wave. We have a tool to do something right now, but the feds aren’t thinking about how to get the most bang for the currently limited buck, they are instead thinking: Assume we have 300 million doses. As the CDC’s document admits, men are considerably more vulnerable to hospitalization and death from Covid than are women, but of course that is not Ethics, because men are Privileged. Or something. Nobody needs to explain this conundrum because nobody who isn’t sexist and racist would dare mention it. This is not confidence-inducing, to say the least. At minimum, shouldn’t they be thinking in multiplicative terms, such as that an elderly essential worker with a high risk condition should go ahead of a 25-year-old essential worker who runs marathons?