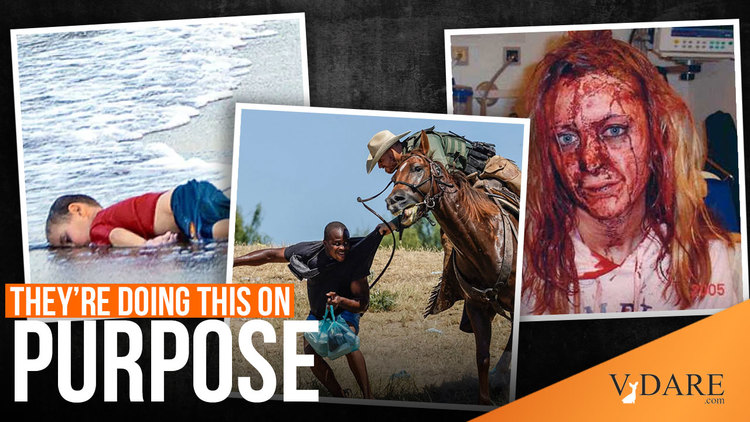 “Sovereign is he who decides on the exception,” wrote Carl Schmitt in Political Theology. In The Concept of the Political, he decreed: “The specific political distinction to which political actions and motives can be traced is the distinction between friend and enemy” [emphasis his]. The pretty lies of liberal, legalistic, and ostensibly rational government go out the window when the state takes sides, using power against its foes regardless of the facts or the law. But even Schmitt couldn’t have imagined a state seemingly dedicated to its own annihilation and targeting its own defenders. Nevertheless, that’s what the U.S. government has become today, under Joe Biden.

The Biden Regime welcomes an illegal and dangerous invasion from Haiti—and simultaneously targets its own border enforcement officers. It is institutionalizing a permanent Anarcho-tyranny, with the Historic American Nation defined as an enemy class (“white supremacists”), and the entire Third World welcomed as reinforcements in what our rulers openly see as a demographic war.

The COVID-19 pandemic provides further evidence. Without the pandemic, one could entertain the idea that the Biden Administration had succumbed to political pressure or naïve sentimentalism when it admitted thousands of Haitian illegals into the United States [Thousands of Haitians Allowed to Stay in U.S. as Texas Camp Clears Out, by Edgar Sandoval, Simon Romero, and Miriam Jordan, New York Times, September 24, 2021]. But the illegals were not tested for COVID-19, according to “our” own Department of Homeland Security chief Alejandro Mayorkas [Mayorkas says Haitian migrants under Del Rio bridge were not tested for COVID-19, by Adam Shaw, Fox News, September 24, 2021]. And DHS admitted this the very same day that President Biden blamed the “refusal” of some Americans to get vaccinated as having “cost all of us,” scapegoating them for prolonging the pandemic, hurting economic growth, and even endangering people’s lives [Remarks by President Biden on the COVID-19 Response and the Vaccination Program, The White House, September 24, 2021].

Even if we accept these divisive remarks at face value, what is the point of pursuing universal vaccination if the federal government is going to admit thousands of unvaccinated foreigners from the poorest countries on Earth? The Biden Regime’s eagerness to punish Americans by importing random Afghans has already unleashed a small-scale measles outbreak.

While it seems almost ridiculous to even mention it given the way our system actually works, there’s also the question of the law. Many Haitians who gathered at the southern border were not escaping from violence in their own country nor were they legitimate asylum seekers. They already had asylum in Latin America and were simply coming to El Norte for a better deal.

Furthermore, the whole reason Haitians are doing this is because they know if they can make it and be given a notice to appear before an immigration court, they can simply ignore the order and stay in the country anyway.

To speak of an “invasion” isn’t hyperbolic when the Haitians are reportedly hijacking buses and escaping into the country [Haitian migrants in custody have ‘hijacked’ multiple buses, by Anna Giaritelli, Yahoo, September 22, 2021].

Significantly, Leftists on Twitter celebrated these hijackings and compared it to Haiti’s inaugural act as an independent nation, slaughtering all the French on the island. 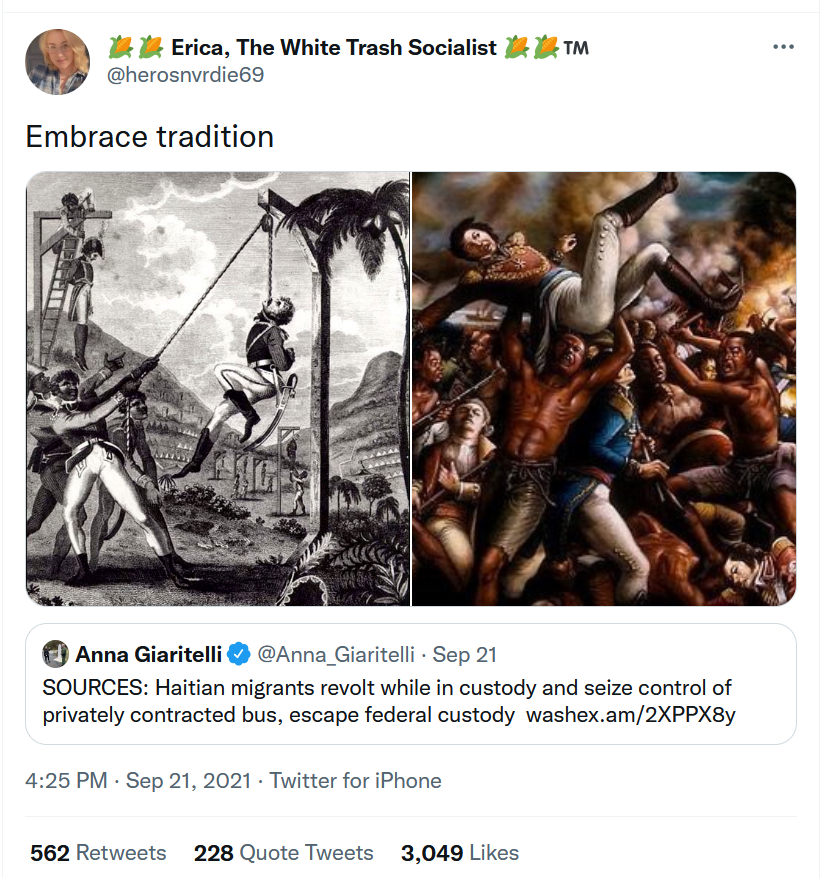 We can say with confidence that the reason some want Haitians admitted into the United States is because it will make the country worse, especially for white people. And we can note in passing that every Third World “anti-colonial” or “independence” struggle ends with demands to be babysat by white people again, which suggests Europeans maybe should have never given away their colonial empires.

Why did this situation even start to begin with? Even Rep. Dan Crenshaw, a notorious squish on immigration, can see that that “this isn’t incompetence, they’re doing this on purpose” [Rep. Crenshaw blasts Biden for border crisis ‘lies’: ‘Can’t imagine a worse leader, Fox News, September 24, 2021]. Just a few months ago, the Biden Administration was trumpeting how it was loosening asylum standards [Biden Administration reverses Trump-era asylum policies, by Josh Gerstein, Politico, June 16, 2021]. While Trump disappointed in many ways, he did significantly reduce the incentives for illegals to storm the southern border. President Joe Biden pledged to reverse these measures and now the effects that any fool could have predicted have come to pass [Biden Has Effectively Opened Our Border. He Is Once Again Vindicating Trump, by Ben Carson, Newsweek, September 24, 2021].

The chaos of the situation presents a political danger to the Biden Administration. A recent poll from Pew finds that a majority of Americans have lost confidence in the president’s immigration policies [Biden Loses Ground With the Public on Issues, Personal Traits, and Job Approval, Pew Research Center, September 23, 2021].

Nonetheless, the way the Administration has chosen to meet it is by condemning the Border Patrol, the very people who have been forced to endanger themselves by containing a disaster.

Pictures a few days ago showed the Border Patrol mounted units pursuing Haitians. Somehow, to the Main Stream Media, some Democratic politicians, and the president himself, this became Border Patrol agents “whipping” migrants. The President vowed those agents “will pay.”

Now, even the photographer who took the pictures said that he didn’t see anyone being whipped and that images could be “misconstrued” [Photographer who snapped border agents on horseback says images can be ‘misconstrued,’ by Jeremy Beaman, Washington Examiner, September 25, 2021]. It doesn’t matter; the phony Narrative is off and running. It’s also going to be used as a way to attack the Border Patrol as an institution and the very concept of national sovereignty [The Ugly History Behind Those Border Agents Chasing Haitian Migrants on Horseback, by Julia Craven, Slate, September 25, 2021].

It’s reminiscent of how the European migrant crisis in 2015 gained momentum because of a photograph of drowned child Aylan Kurdi, victim of his father’s reckless attempt to leave a safe country to get to the wealthier nations of Europe instead. In contrast, pictures of the European victims of immigrant mass murder, for example are routinely ignored.

The fact that Administration policy is seemingly being driven by random photographs taken out of context and lies about “whipping” people is another indication that we do not have a state-run media, but a media run state. Even the faux moralizing and virtue-signaling is ridiculous. Apparently, far more people are outraged that some Haitians didn’t get to invade the country than they are about the U.S. government’s last act in Afghanistan, which was probably blowing up an innocent family [NYT: Biden May Have Droned Innocent Family In Kabul, Possible War Crime, by Joel Pollak, Breitbart, September 10, 2021].

Even though some Haitians have been sent back, many of them will undoubtedly try again to get in. And with the Regime Media rooting for them, many will succeed [Haitian migrants at US Border: ‘We’ve been through 11 countries,’ by Will Grant, BBC, September 24, 2021]. Others are already here [Many Haitian Migrants Are Staying In The U.S. Even As Expulsion Flights Rise, Associated Press, September 23, 2021]. Thanks to Birthright Citizenship (which President Trump didn’t end), their children will now enjoy special privileges over white and Asian Americans for the rest of their lives.

Moreover, these Haitians are just the beginning of what will likely be an endless tide of Africans demanding entry to the United States. They will be welcomed by their racial kinsmen like Rep. Ayanna Pressley, who says that U.S. Customs and Border Protection is a “rogue and racist agency” [Rep. Pressley: Haiti special envoy’s resignation ‘damning’ as US deportations continue, by Gintautas Dumcius, Dorchester Reporter, September 23, 2021]. She also tells us we must admit them because “Haitian lives are Black lives [ed. capital B!] and Black lives matter.”

What doesn’t matter to the current System is national sovereignty, the rule of law, and the well-being of American citizens. Anarcho-tyranny is no longer a disturbing phenomenon that we note occasionally. It’s become permanent, the defining characteristic of American government.

It might seem presumptuous to challenge the late Sam Francis, but “anarcho-tyranny” might be the wrong term now. The Haitian “crisis” might seem like an exception from the way things normally work. However, Schmitt reminds us that “the exception can be more important than the rule.” “The normal proves nothing, the exception proves everything; it not only confirms the rule—the rule only exists because of the exception,” he wrote in Political Theology.

Those who literally defend the borders of the country have become the enemies of the state. Invaders become a privileged class. The effects of this are worse than an outright military conquest. The relatively benign rule of a George III would be far preferable than permanent transformation to a continent-wide Haiti.

The current constitutional order is already dead. The only question that matters is whether the current anti-American order remains in place or whether a new movement of national reclamation can take its place and save what’s left of the only country we have.