Oprahfication, Ethnomasochism, And The Preventable Death of Aylan Kurdi

Because human distress is involved, Europe’s current “refugee” crisis lends itself to Oprahfication—known to British listeners as Dianafication— in which rational policy is swept away by a hot syrupy tsunami of collective emoting.

Thus the crowds you've been seeing in news pictures the past few days, in Greece, Macedonia, and Hungary, almost all come via Turkey. And Turkey is a peaceful, stable, modern country, and has been accommodating to the refugees, settling two million of them in camps.

Indeed, a common point of departure for the boats heading to Greece is Bodrum, on the coast of Western Turkey. I was in Bodrum four years ago. I wrote at the time that the most dangerous thing about the town was teenagers riding motor scooters at high speed with one hand while talking into their smartphones.

Bodrum's a nice place; just…not as nice as Germany, Sweden, or Britain. 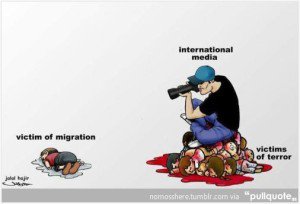 Or Canada, which Abdullah Kurdi was hoping to reach when he left Bodrum Tuesday night with his wife and two kids on a small rubber dinghy headed for the Greek islands. [Aylan’s story: How desperation left a 3-year-old boy washed up on a Turkish beach, By Justin Wm. Moyer, Washington Post, September 3, 2015 ]

Here we get to the mass hysteria, the Oprahfication.

Mr. Kurdi's boat sank; the wife and children drowned; the body of one child, Aylan Kurdi, 3, was washed up on a Turkish beach; the Western media frontpaged a photograph of the little corpse.

We are now, as I speak, in the midst of a public frenzy of emoting about the event, with celebrities weeping on camera and politicians vying to accuse each other, and sometimes also their voters and even themselves, of responsibility for the child's death. You did it! We all did it! Guilty, guilty, we are all guilty! Ayeee!

David Cameron, Britain's weak and shallow Prime Minister, has actually changed his nation's asylum policies in response to all the keening and sobbing.

Yet Mr. Kurdi, the child's father, had been living in Turkey for a year. He looks clean, healthy, and well-fed. So do his wife and kids in the pre-embarkation photographs.

It's true that he's a Kurd, and that Turkey's government does not celebrate Kurdishness in the full multicultural spirit, having their own long-running Kurdish problem; but if that was intolerable to Mr. Kurdi, he could have gone as a refugee to Iraqi Kurdistan, a de facto independent country that is hosting ten thousand Syrian Kurdish refugees.

He had options. Staying in Turkey just wasn't the best option.

You can imagine cases of genuine refugees. The swarms heading for Europe likely include some genuine refugees among the economic migrants, criminals and terrorists. But as Ann Coulter writes in her splendid book ¡Adíos America!:

The biggest scams in immigration law are the humanitarian cases. One hundred percent of refugee and asylum claims are either obvious frauds or frauds that haven't been proved yet. The only result of our asylum policies is that we get good liars.

How did we get here? The first thing to be said about the current crisis is that it was perfectly predictable. Not only was it predictable, it was predicted: by French author Jean Raspail in his 1973 novel The Camp of the Saints.

Not only was this situation predictable, it was preventable. In connection to which, permit me to quote from a famous speech by British immigration patriot Enoch Powell back in 1968 — five years before Camp of the Saints was first published. Quote from Powell:

One is that by the very order of things such evils are not demonstrable until they have occurred: at each stage in their onset there is room for doubt and for dispute whether they be real or imaginary. By the same token, they attract little attention in comparison with current troubles, which are both indisputable and pressing: whence the besetting temptation of all politics to concern itself with the immediate present at the expense of the future.

Powell went on to warn his fellow-countrymen against mass immigration from poor countries of the former British Empire. For this he was denounced as a racist and excluded from government positions.

Powell was of course right. As I noted last week, a big pull factor for these incoming hordes is the settled communities of fellow-countrymen and co-religionists in the West.

To judge from interviews with migrants, some sizable proportion seem to be from Pakistan, headed for Britain. There's no war in Pakistan, but there is a huge Pakistani community well-established in Britain. If Enoch Powell's advice had been heeded this would not be the case, and that pull factor wouldn't be present.

If Enoch Powell was right that "The supreme function of statesmanship is to provide against preventable evils," then what we are seeing in Europe is a massive failure of statesmanship.

But given the knowledge seeping out, against the best efforts of the official media, about things like Muslim rape culture in Britain and Sweden—you might think that people in the First World would be looking to their defenses and tightening up their settlement policies.

Well, some people are. Resistance to Open Borders is rising all over Europe, and condensing out into political parties like the Front National in France, the AfD in Germany, Geert Wilders' Party For Freedom in Holland, and others.

The way human nature works, though, some other people are just doubling down on their ethnomasochism. The most sensational case in the present crisis has been Iceland.

Iceland's official cap on annual settlement of refugees is fifty. Fifty a year. You might think that's stingy, but bear in mind that Iceland's entire population is only 300,000. Fifty people is to Iceland what fifty thousand would be to the U.S.A.

Well, someone named Bryndis Bjorgvinsdottir, described by the Guardian  as an "author and professor," put out a call on Facebook last Sunday asking for Icelanders to sign an open letter to Iceland's government urging more help for Syrian refugees. Said the letter:

Refugees are our future spouses, best friends, or soulmates, the drummer for the band of our children, our next colleague, Miss Iceland in 2022, the carpenter who finally finished the bathroom, the cook in the cafeteria, the fireman, the computer genius, or the television host.[Icelanders call on government to take in more Syrian refugees,By Jessica Elgot, September 1, 2015  ]

More than 12,000 Icelanders have signed the letter. That's five percent of the adult population. Many of the responders—I can't find a reliable number for how many—offered to take Syrian refugees into their own homes. 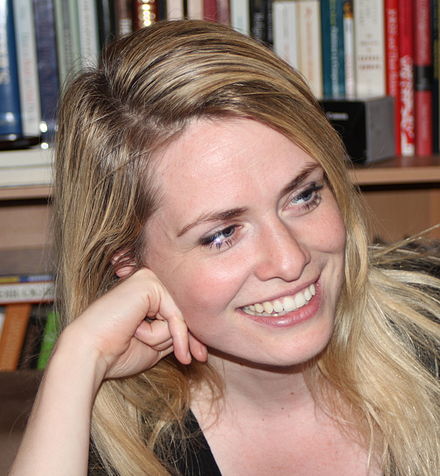 Boy, you can't beat the Scandinavians for ethnomasochism. I guess it gets really boring up there in Iceland, just looking at blonde, blue-eyed people all the time (like Bryndis herself, pictured right) never having anyone decapitate one of your soldiers in the street or let off a bomb on a bus.

The Germans are almost as bad. I'm looking at a German website called Flüchtlinge Willkommen, that's "Refugees Welcome." Quote from the home page:

Translation: "Why shouldn't refugees in Germany just be able to live in shared apartments instead of mass accommodation?" The website goes on to urge Germans to open their apartments to refugees.

We're not immune, either. Our own homegrown ethnomasochist Glenn Beck picked up the Iceland story and enthused about it on his radio show. Quote:

Talk about ethnomasochism! Beck deserves a Darwin Award for eagerness to remove himself from the gene pool.

Mamadou Kamara, an 18-year-old from the Ivory Coast, allegedly slit the throat of Vincenzo Solano, 68, and then attacked his Spanish-born wife, Mercedes Ibanez, 70.

Ms. Ibanez fell to her death from a second-floor balcony, during a robbery that turned violent.

Mr. Kamara is one of thousands of migrants and refugees living at a vast reception centre at nearby Mineo, in south-eastern Sicily.

I guess Signor Solano and his wife, him with his throat slit and she with her neck broken, weren't as photogenic as the little drowned Syrian child.

They are just as dead, though.

Camp Of The SaintsEnoch Powell
<< Previous
Next >>
LATEST