CNBC reports (as Ann Corcoran noted the other day) that Afghans are bringing measles to the US.

Inbound flights of Afghan refugees to the United States will remain suspended for at least another week, a White House spokeswoman said Monday, after four cases of measles were discovered among recently arrived Afghans.

The flights, which were first halted Friday, “will remain paused for at least 7 additional days,” deputy White House press secretary Karine Jean-Pierre said to reporters aboard Air Force One en route to Boise, Idaho. A White House official later clarified this meant a week from Monday, not a week from last Friday.

Measles is a highly contagious virus that can be spread through coughing or sneezing. In 2000, the Centers for Disease Control declared that measles was no longer being transmitted among Americans.

U.S.-bound Afghan evacuation flights will be halted for a week after measles cases, by Christina Wilkie and Kevin Breuninger, September 13 20212

Measles was wiped out in the US by vaccination. Wikipedia has an article called Measles resurgence in the United States which says that  "However, it continues to be reintroduced by international travelers" and also credits American anti-vaccination sentiment, which may have been encourage by the absence of native American measles.

I am old enough to have been vaccinated for measles as a child, but so long ago that Lyndon Johnson was President. It might have worn off.

The military bases where the evacuees are being kept are running vaccination programs, and now they're trying to vaccinate the Afghans before they arrive, but it may be too late.

JustTheNews.com has a story about the threat, with a leaked email.

The head of the Centers for Disease Control and Prevention has sent a private warning to the chief of Afghan evacuation operations that measles is spreading among refugees and poses a "major public health threat" that includes the potential for "larger imminent outbreaks" in U.S. communities already reeling from the coronavirus.

"The large number of unvaccinated Afghan evacuees as seen already has the potential to seed countless U.S. community outbreaks,” Walensky warned in the four-page memo obtained by Just the News.

"These outbreaks represent a major public health threat and rapid mass vaccination and expanding quarantine and isolation capacities are essential," she stressed.

Six confirmed, 17 suspected cases is a 'major public health threat' and ‘has the potential to seed countless U S community outbreaks,’ CDC chief warns in private letter obtained by Just the News.

The leaked email is in the form of a photograph of a computer screen--government computers may record where you forward things, but everyone has camera in their pocket these days. 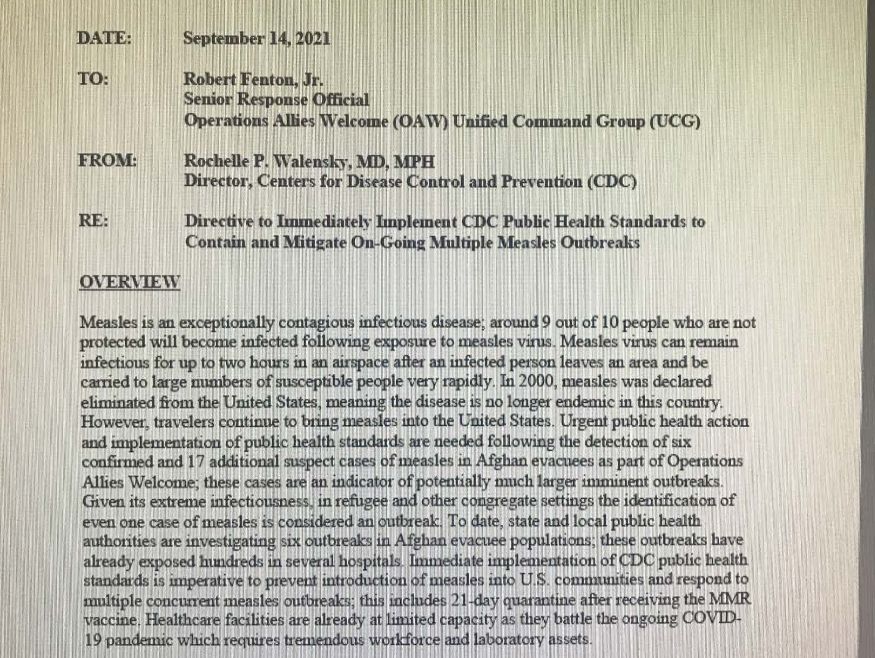 Feel free to doubt, as always with leaks, that the CDC head said this, but there's no doubt that she should have said it.