Pictures: Alan Kurdi, Killed By His Father's Recklessness Got Much More Coverage Than A Small French Child Run Over DELIBERATELY 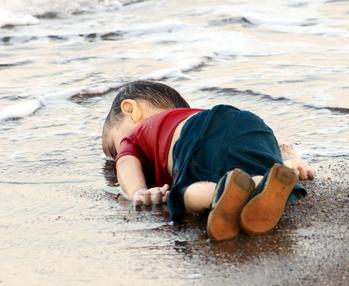 Above, a picture of a small French child—and her doll—killed in the Nice truck attack. Pictured right, 3-year old Alan Kurdi, who was drowned when his father, Abdullah Kurdi, decided to take him to sea in a small rubber boat, in an attempt to emigrate to the West for economic reasons. (Wikipedia currently calls this a fatal boating accident.) Wikipedia says

In the early hours of 2 September 2015, Kurdi and his family boarded a small plastic or rubber inflatable boat, which capsized about five minutes after leaving Bodrum in Turkey. Sixteen people were in the boat, which was designed for a maximum of eight people. They were trying to reach the Greek island of Kos, about 30 minutes (4 kilometres or 2 1⁄2 miles) from Bodrum. Kurdi's father said: "We had no life vests", but also said they were wearing life jackets, but they "were all fake". Others have stated that they believed that they were wearing lifejackets but the items were ineffective.

It was later stated on Syrian radio that the Kurdi family paid $5,860 for their four spaces on the boat, which had twelve passengers on it despite being only about five meters long. Alan Kurdi's mother joined in the trip even though she had a fear of being on the open sea. Tima Kurdi, Alan Kurdi's aunt, advised her sister not to go. The individuals on the boat evaded the Turkish Coastguard by setting out from an isolated beach late at night.

Alan and his family were perfectly safe in Turkey. Abdullah Kurdi risked their lives in a small boat in attempt to get to Europe as a first step to migration to Canada.The illustration below, with caption, is from Gaddafi’s Revenge: Europe Can Save Africans From Drowning—Or Itself From Being Swamped 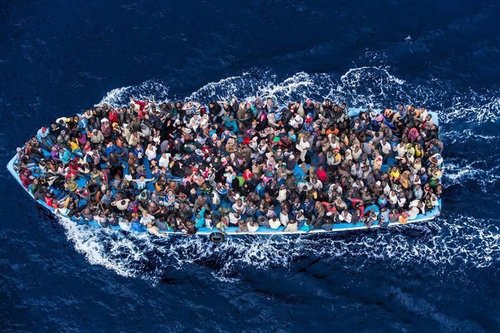 This is a stupidly dangerous exercise—if the crossing was legal, the boat owner would go jail for endangering his passengers.

You can  be arrested by Child Protective Services  if  you leave your child unattended in a parked car for ten minutes, but Muslim and Mexican parents are treated like moral paragons for  exposing their children to death for economic motives. See Oprahfication, Ethnomasochism, And The Preventable Death of Aylan Kurdi.

But young Alan Kurdi's death was seen in a million actual newspapers, shown on television, talked about in Congress and the Canadian parliament. The photo below, from the Nice truck attack, has received much less coverage: 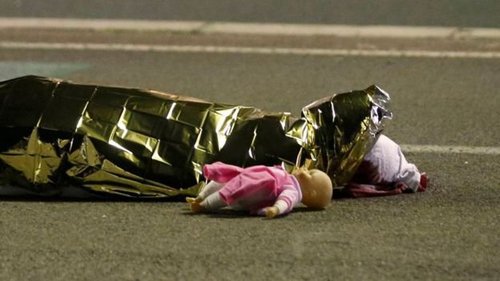 Why is there so much more about the first child's photograph than the second? The answer seems to be that when an immigrant dies, for whatever reason, it's OK to have a moral panic. But when immigrants kill,  any response is backlash, and  evil.