Anyone who remembers the September 11, 2001 attacks can recall the deliberate effort by the Main Stream Media to block out certain footage. As Donald Trump single-handedly revealed during the Republican primaries, some Muslims in the United States celebrated when the Twin Towers came down. These initial reports spread quickly via word of mouth and via the Internet (which was not nearly as prevalent or developed then) but were essentially "disappeared" by the MSM.

We can also all remember the footage of the bodies falling from the towers as people chose plummeting to their death to being burned alive. This footage was also essentially "disappeared" in the days that followed. As country singer Darryl Worley sang in his song "Have You Forgotten?", "It'll just breed anger, that's what the experts say."

We are seeing a similar theme when it comes to Islamic terrorist attacks. The footage which has emerged after the terrorist attacks in Nice has been blacked out. The acts committed by the executioners of the Islamic State are concealed behind euphemisms. Most disturbingly, the French government deliberately concealed reports of torture committed against victims by Islamic state terrorists in the Bataclan attacks.

A French government committee has heard testimony, suppressed by the French government at the time and not published online until this week, that the killers in the Bataclan appear to have tortured their victims on the second floor of the club.

The chief police witness in Parliament testified that on the night of the attacks, an investigating officer, tears streaming down his face, rushed out of the Bataclan and vomited in front of him just after seeing the disfigured bodies... 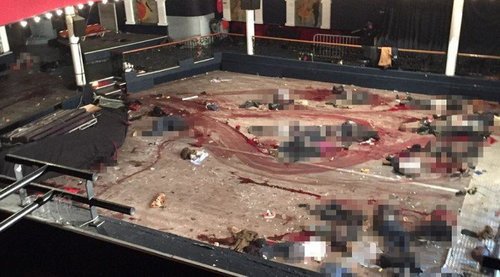 The news follows reports that German police sat on the huge number of sexual assaults committed by Islamist migrants in Cologne, which a secret report estimated at thousands, not hundreds. Heat Street will continue to report.

Social networking sites are also removing messages of support for the attacks in Nice.

Twitter Inc moved swiftly to remove posts from Islamic extremists glorifying a truck attack in Nice, France, watchdog groups said Friday, in a rare round of praise for a platform that has often struggled to contain violent propaganda.

In contrast, footage and pictures of the deaths of people like Trayvon Martin, Michael Brown, Eric Garner, Philando Castile and Alton Sterling are widely promoted. The deaths of police officers and other victims of the violence unleashed by Black Lives Matter is quickly hushed up. And Twitter even made a little symbol for the #BlackLivesMatter hashtag.

And remember how the picture of that dead child on the beach was used to push for the invasion of Europe?

What the MSM is really doing when it signals what is ok to watch and what isn't is who we are supposed to care about. Random whites murdered by blacks are boring and no one cares about them. A few dead cops will hold the news cycle for a day or two, but it's not really worth getting worked up about. A terrorist attack? Better get used to it, as even the French government says. It's business as usual.

But the next time some criminal acts like an idiot in front of his arresting officer and gets himself shot, you will be made to care about him.

Most people are not persuaded by reason and evidence. They're persuaded by anecdote and emotion. And video, photos, and artificially produced viral campaigns are the most important tools that are used to push the Narrative today. Not "all lives matter." Some lives further the Narrative and are therefore worthy of massive attention. Other lives could undermine the Narrative, and must quickly be hushed up.

None of this is by accident. It's all being pushed from the top down. And being aware that this manipulation is taking place is the first step to combating it.