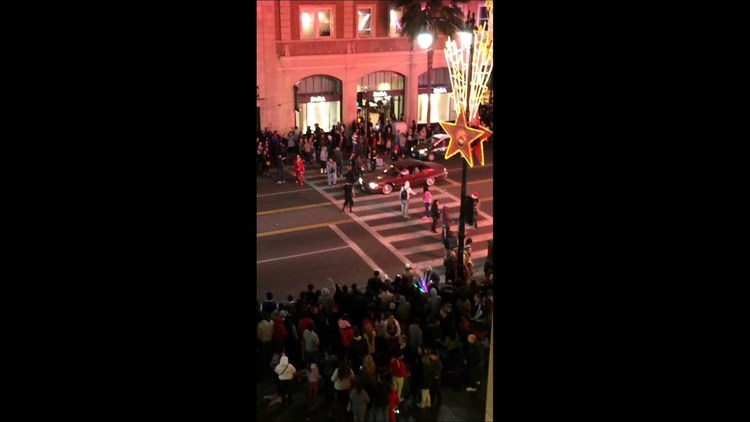 The late Sam Francis famously defined anarcho-tyranny as the refusal to control real criminals coupled with increasing repression against the innocent. He linked it to multiculturalism, but it's also part of the strategy of left wing "protesters."

Anyone who has been to lefty protests is familiar with the pattern.

This time, we have a new variation. Protesters in Hollywood decided they were entitled to block the road. In this video, you can see a white SUV move slowly up to the line of protesters, trying to maneuver through. The protesters then rush the vehicle.

You can guess the protesters' reaction: Calling the police, reportedly saying there was a "hit and run," and wondering why the police aren't hunting people down. ['Car plowed us down': #MillionsMarchLA demonstrators burn flag, block traffic [Vine], Twitchy, December 28, 2014]

The biggest problem with the Left these days—they are so humorless. They have plenty of snark, but no sense of irony. The minute they blocked the road, there should have been arrests.

This is the problem with coddling protesters—it only leads to further disruptions. The answer, as we've always said, is ruthless coercion. The need of SWPL hipsters for self-congratulation does not even compare to the need of productive and useful Americans to get where they are going.

But we can expect the government will only leap into action when the leftists find this poor guy and use the "anarchist" weapon of choice—lawsuits and passive-aggressive blog posts.