Announcing VDARE.com ‘s 2016 War Against Christmas Competition! —And Reminding President Trump That This War Can Be Stopped By Federal Legislation 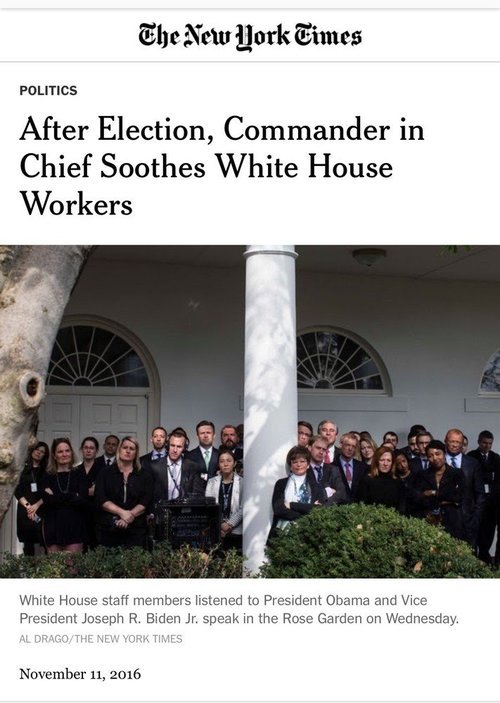 So there he is, the great blond beast, on his victory lap, exulting like Conan the Barbarian/ Genghis Khan in crushing his enemies, driving them before him and (literally in this case) hearing the lamentations of their women…from a lectern emblazoned with “MERRY CHRISTMAS” in verboten red and green.

Above: Donald Trump in Wisconsin on Tuesday for one of the series of rallies that he's apparently calling the "Merry Christmas USA Thank You Tour 2016." He's standing in front of six Christmas trees.

So now the phrase Merry Christmas, thanks to the long-running far-right "War on Christmas" conspiracy theory—which was invented by the white-nationalist John Birch Society in 1959—has been officially weaponized into the partisan slogan of a president elected on a wave of hateful rhetoric about, among others, refugees.

Truly, it's what a Middle Eastern Jew who was born in a barn because no one else would take his parents in would have wanted.

Donald Trump Is Trying to Take Ownership of the Phrase Merry Christmas, December 14 2016.

(Needless to say, this is rank journalistic incompetence. The John Birch Society was/is not “white nationalist” or particularly racially conscious at all—to quote from its entry in the notorious right-wing source Wikipedia:

Antisemitic, racist, anti-Mormon, anti-Masonic groups criticized the organization's acceptance of Jews, non-whites, Masons, and Mormons as members…[Founder Robert W,] Welch rejected these accusations by his detractors: ‘All we are interested in here is opposing the advance of the Communists, and eventually destroying the whole Communist conspiracy, so that Jews and Christians alike, and Mohammedans and Buddhists, can again have a decent world in which to live.’

But to MSM enforcers like Mathis-Lilley [Tweet him]  “white nationalist” is simply the all-purpose cuss word du jour.

It’s not just the Left that is stunned by Trump’s triumph. Battle-scarred veterans of the War on Christmas and the  War on the Historic American Nation that is post-1965 immigration policy, like myself and my long-time ally Tom Piatak, are disoriented by the amazing fact that, after so many years of unfashionable guerilla warfare, with astonishing suddenness a fellow-Christmas Warrior has won the White House. And he won because of his immigration patriotism—and because of his symbolic stand against the War on Christmas, which can only have helped him carry Evangelicals 81—19%  despite his distinctly less-then-evangelical (in fact rather Conan-ish) life.

At least, that’s our theory. Does someone have a better one?

And it’s not just Trump. Wunderkind Stephen Miller, just appointed to the key White House post of Senior Advisor to the President for Policy, has also been point-and-spluttered by Slate for excellent columns opposing the War On Christmas in the Duke University student paper The Chronicle: Attack of the secularist Scrooges, December 6, 2005; The Case For Christmas, December 4, 2006. He said in the latter:

There is absolutely no single logical reason why we shouldn't have a Christmas tree on the quad and a Nativity scene in the Bryan Center. Eighty-five percent of our nation is Christian and every single one of us, Christian or not (I'm a practicing Jew myself), is living in a country settled and founded by Christians and benefitting daily from the principles of Christian philosophy on which our forebears relied.

Christianity is embedded in the very soul of our nation

The War Against Christmas is one of my personal favorite topics. Reporting on it has got me, at least as of this writing, one of my few mentions in Wikipedia (right up there with Bill O’Reilly—wow!)  although it misdates my interest, which goes back to 1995 when I got poor John O’Sullivan, then Editor of National Review, to start a War Against Christmas Competition to find the most egregious attempt to diss Christmas. (We called it “War Against Christmas”, but “War On Christmas” has obviously won out in popular usage, so I’ve adapted, with characteristic grace.) 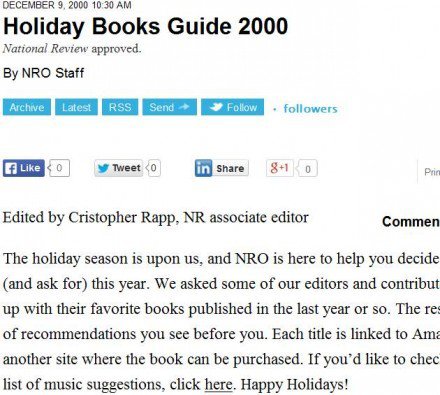 The last NR competition ran in 1997, at which time William F. Buckley for his own discreditable reasons had already fired O’Sullivan, but had not yet leaked the disinformation that O’Sullivan was “resigning to write a book.” The War Against Christmas Competition was promptly dropped, along with the cause of patriotic immigration reform—not coincidentally. In 2000, NR itself actually published a “Holiday Books Guide”. (NR has fudged since then to gull the outraged peasantry, but the National Review Wine Club still had a ”Special Holiday Season Offer” in 2015). 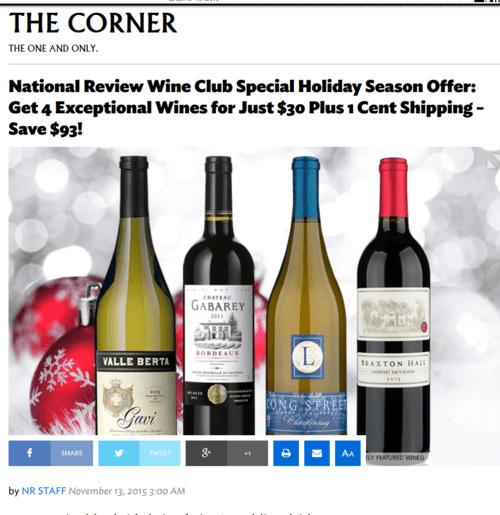 One of the reasons we fight the War On Christmas is that, as the late Sam Francis wrote back in 2004, the War On Christmas is A War On The West. This became even clearer more recently with the unfolding in Europe of what the French writer Renaud Camus calls “The Great Replacement.” As the historic American nation that celebrates Christmas is replaced by non-traditional immigration, the festival will go the way of the Jefferson-Jackson Dinner. Indeed, one of the 2015 shots we recorded was by one Paul Waldman [Email him] who managed simultaneously to sneer at the concept of a War on Christmas and also to gloat that “as the country grew more diverse in all kinds of ways” American Christians’ “position of cultural dominance was undercut”—an unusually blatant expression of combined immigration enthusiasm and Christophobia.

When I declared the winner in our War On Christmas Competition 2014, I noted that the War Against Christmas in the U.S. had gone through eight distinct phases:

I thought the Ruling Class, drunk with power after Obama’s re-election,  was on the verge of suddenly declaring that resistance to the War On Christmas was Unacceptable, just as it did with homosexual marriage in 2014—and the Confederate Battle Flag in 2015

But in 2013 I  concluded that, not for the first time, I seemed to have been early—as I was in 2004, when I predicted the first outbreak of nastiness, which didn’t show up until 2008. Just as on the Western Front a century ago 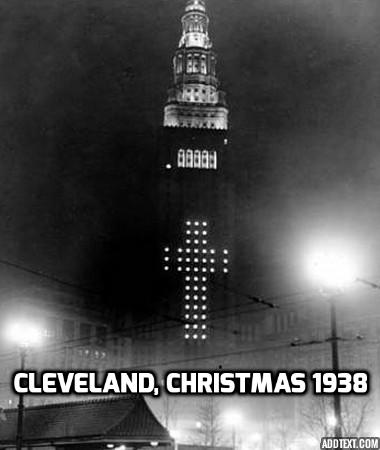 Has established itself for the next three years. As in World War I, trench warfare does mean that the enemy (if you identify with the Allies) is in possession of much of the field. You need only glance at the pictures of Cleveland Christmases past in Tom Piatak’s VDARE.com 2014 survey of the War On Christmas, or read about this 2006 Los Angeles Times editorial, to realize how far the Cultural Marxist Khristmaskampf has gotten.

And the Christophobes are still able to launch successful local offensives which the national MSM now often will not report.

2016 appears likely to be the year of Trump Trauma. The entire American Left/ MSM is an extraordinary state of emotional meltdown after Trump’s electoral triumph, and it doesn’t seem to be getting any better. The fact that the U.S. President-Elect is denouncing the War On Christmas certainly brings the issue unprecedented public attention, but it also polarizes it into a partisan issue, much as Fox News did when it first picked the issue up in 2004. 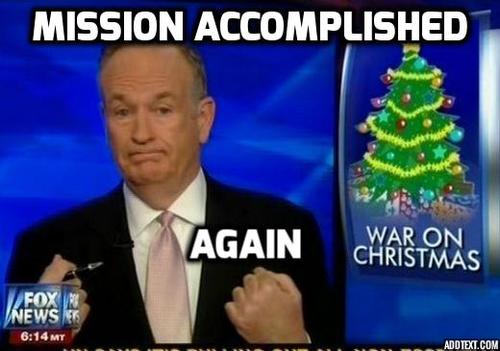 One sign that this year’s clash could be unusually bitter: Fox’s Bill O’Reilly has again claimed victory in the War On Christmas, something he does from time to time apparently to calm things down when he thinks people (advertisers?) are getting too upset. [War on Christmas won by the good guys, but insurgents remain, By Bill O'Reilly,  Fox, December 15, 2016] (See also his 2015,  2014, 2013, 2011, and 2007 declarations of victory.)

Significantly, O’Reilly’s evidence in 2016 was the American Family Association’s Naughty Or Nice List, which monitors how retailers are treating Christmas and shows some improvement. But this was released in mid-November—long before a judgement on the overall progress of the War could possibly be made.

However inconvenient for politicians, fashionable pundits and media ad salesmen, the War On Christmas is a fight to the death It is just one aspect of the increasing desperation on the part of what I have called Anti-America to suppress America before the latter wakes up and ends its own dispossession through immigration policy. 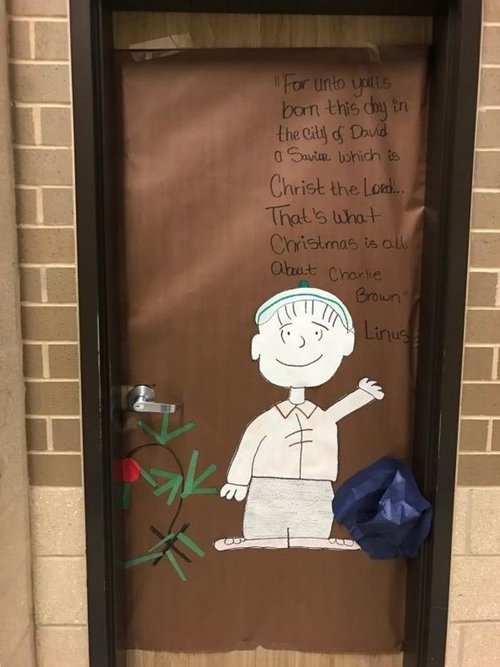 And this line must be drawn by Federal legislation—just as Texas’ Merry Christmas Law played a role in forcing the Christophobic Killeen Independent School District to allow a nurse’s aide to display a homemade poster featuring the last scene in Charlie Brown’s Christmas.

I know the Trump Administration has rather a lot to do. But this is not the least important.

The 2015 winner in our contest: a reader calling himself Joe Sixpack who forwarded this story.

Professor of Of  Terri Susan Fine [Email her]  political science at the University of Central Florida wrote an op-ed for the UCF college paper UCFToday  asking students to wish each other “Happy Federal Holiday”—because even "Happy Holidays" could be offensive to someone:

In our efforts to be inclusive, we show cultural insensitivity both by equating one major holiday with a minor holiday and failing to recognize that diversity includes those who celebrate neither holiday.

Couldn’t “Happy Holidays” be the most inclusive greeting because it is so non-specific? Yes, perhaps, but it is the non-specificity of “Happy Holidays” that makes it inappropriate because it fails to recognize the importance of Christmas to Christians while it also suggests that Chanukah should be more important to Jews than the high holidays and festivals that come at other times during the year.

I would suggest that we take a new approach that observes “the holidays” we all have on our calendars, no matter our religion.

My friends and I wish each other a “Happy Federal Holiday.”

“A Holiday Greeting That Applies to Everyone”, December 16, 2015

We will be sending Joe Sixpack a bottle of champagne…or a sixpack, if he prefers.

Submit your entries to christmas@vdare.com, or through our Android App, available here.

This year’s prize will depend on the success of our Christmas Appeal!

A very Merry Christmas from all of us at VDARE.com.