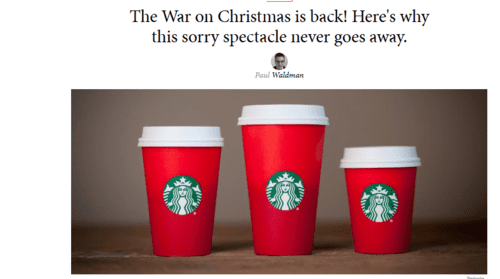 Paul Waldman in THE WEEK: The War On Christmas Is Real—And We Won

Here’s The American Prospect writer and The Washington Post blogger Paul Waldman in the The Week. Waldman doesn’t seem to be that well up on the War on Christmas—he thinks it only started ten years ago—but has some interestingly comments, emphasis very much added below:

The War on Christmas has been going on for a decade or so now, and though it may not rage with quite the fury it once did, it still serves everyone's interests. The conservative Christians who gear up for the war every year get to feed their sense of persecution and the belief that their lives are a righteous struggle against the large and sinister forces working to destroy them. Conservative media get something to shake their fists at for a couple of months. And the rest of us get to feel superior and mock them for being so ridiculous.

While I'm certainly happy to mock, you can do that and still acknowledge that the sense of oppression some Christians feel is real. It actually comes from a loss of privilege, but that doesn't mean they aren't sincere when they say it burns them up — particularly when politicians and talk radio hosts are constantly telling them how angry they should be.

The privilege I'm talking about is the one that derives from cultural hegemony. For most of this country's history, Christianity was so dominant in American life that no one else's culture needed to be considered in anything but an occasional way. If there were prayers in school, then of course they would be Christian prayers. If there were signs out for the holidays, of course they'd acknowledge only the Christian holiday.

But as the country grew more diverse in all kinds of ways, ignoring the growing minority of non-Christians no longer seemed like the neighborly thing to do. So among other things, department stores decided that to be inclusive and welcoming to everyone, they'd put up signs reading "Happy Holidays" instead of "Merry Christmas."

Some Christians felt that this represented something being taken away from them, which it does. Their position of cultural dominance was undercut, so that when they walked through the department store door, their culture wasn't given a privileged place. Instead, they'd be no more or less important than anyone else.

[The War on Christmas is back! Here's why this sorry spectacle never goes away, by Paul Waldman, The Week, November 10, 2015]

Okay, so Waldman is saying that Christians actually are being marginalized, because of the "growing minority of non-Christians"—a direct result of mass immigration. And it's apparently a good thing.

This reminds me of that Lawrence Chua review of Alien Nation in the Village Voice in 1995, which Peter Brimelow said was his favorite hostile review: "Our survival depends on the destruction of the privilege Brimelow is so desperate to defend. His fear is justified. We will bury him."

No, you won't. Or Christmas, either.