The Sun People Tsunami And The Inevitability Of Lifeboat Ethics

Our Ruling Class’s anxieties about the Russians, and their anxieties about us, have a deckchairs-on-the-Titanic quality about them. Peering forward into the middle 21st century as best I am able, there are much bigger issues looming.

Nine years ago I wrote a piece titled "The Arctic Alliance." My argument, in a nutshell, was that the north-Eurasian nations—that is, Europe (along with some of its settler nations like Australia and the U.S.A.), Russia, China, Japan, and the Koreas—shared common strengths and a common weakness.

The common strengths are high average IQ and a long record of civilizational attainment, with the aforementioned blots duly noted. The common weakness is demographic collapse—below-replacement birth rates. 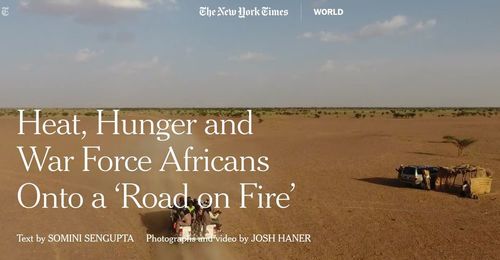 Now, nine years on, with millions of Sun People pouring into those Ice People nations, I think I'm entitled to at least a whispered "I told you so."

Recently, the New York Times ran a report headlined Heat, Hunger and War Force Africans Onto a "Road on Fire". The piece is about the Sahel: that east-west strip along Africa where the southern Sahara Desert meets the grasslands and woodlands further south. The "Road on Fire" is the road out of there, on the people-smuggling

routes across the Sahara, north to the Mediterranean and Europe.

Steve Sailer noticed the same report, and has some pithy comments about it. I can't improve on Steve, but I urge listeners to check out the report. It's revealing in two different ways.

And the human capital is poor: low-IQ populations, not well adapted to modern societies, with no native industries or expertise in anything much. There has been no civilization down there in the Sahel, other than what European colonizers brought in. It's not smug or spiteful to point that out, it's just factual.

Yet still the populations surge. Niger, right in the middle of the strip, has a total fertility rate of almost seven children per woman, the highest in the world. Seven children per woman. Mali and Burkina Faso, to the west, are just below six; Chad to the east is a comparatively feeble four and a half.

Those numbers are way different from the corresponding numbers for Ice People. For Europe as a whole, the total fertility rate is 1.6 children per woman. Russia and China are about the same. Japan is 1.4, South Korea 1.25, North Korea … who knows?

That's the demographic tsunami that's been starting to come ashore in Europe this past year and a half. Set against that, our children and grandchildren in the middle of this century will look back with amazement at our intra-Arctic bickering about whether Vladimir Putin did or did not assist in releasing John Podesta's emails.

There are ethical and ideological issues to go along with the demographic ones.

For example: How will moral universalism hold up as the demographic waters rise? Right now millions of people from these hopeless regions, and other places like Afghanistan (total fertility rate 5.22) are journeying north across the Sahara or westwards through the Middle East to break into Europe; and the Europeans, in their naïve moral universality, are letting them in.

That at least offers some relief to those swelling populations in Hopelessland. But what happens when Europeans decide, as they surely will, that while a million or two African and Muslim "migrants" is OK, ten or twenty million is not, and a hundred million is totally out of court? Africa alone easily has a hundred million desperate souls to spare.

All sorts of questions arise. Will the word "racist" continue to be a premier insult when everyone—everyone but a small rearguard of moral-universalist cranks—agrees that our Ice People nations have all the black Africans they can handle?

And how will the black population of the U.S.A. process that? Will they clamor for solidarity with their African brothers and sisters, demanding that we admit a few tens of millions of them? Or will First-Worldiness trump racial solidarity, and blacks join whites in calling for the drawbridge to be pulled up?

What about the other end of Eurasia? Will the Japanese, Chinese, and Koreans continue to keep their nations' doors tight shut even as their populations dwindle? Will they be able to?

There's a lot of questions there, but I don't have any answers. When I think about these things, all I can come up with is Lifeboat Ethics. Quote from the foundational text:

So here we sit, say 50 people in our lifeboat. To be generous, let us assume it has room for 10 more, making a total capacity of 60. Suppose the 50 of us in the lifeboat see 100 others swimming in the water outside, begging for admission to our boat or for handouts. We have several options: we may be tempted to try to live by the Christian ideal of being "our brother's keeper," or by the Marxist ideal of "to each according to his needs." Since the needs of all in the water are the same, and since they can all be seen as "our brothers," we could take them all into our boat, making a total of 150 in a boat designed for 60. The boat swamps, everyone drowns. Complete justice, complete catastrophe …

Suppose we decide to preserve our small safety factor and admit no more to the lifeboat. Our survival is then possible although we shall have to be constantly on guard against boarding parties.

Lifeboat Ethics: the Case Against Helping the Poor

Yes, that's bleak, but who's got anything else to say? Who, actually—other than me—who is thinking about these issues?

Steve Sailer, in his commentary on the New York Times report, implies that we need to get Africans using birth control. Haven't we been trying that for, like, my entire lifetime?

Like Steve, I'm a gentle soul who wishes no harm to anyone. I'm sorry for those folk in the Sahel, in their poverty and hopelessness. They didn't ask to be born there, any more than I asked to be born in the West. I got lucky and they didn't. It's a shame. It's not fair. I entirely agree.

At the same time, I very much want Western Civilization to survive; and I want my children and grandchildren to live in it, in peace and prosperity.

I really hope there is some humane way we can science our way out of this colossal problem that's bearing down on us. But I don't see it.

Look at our reaction to the taking of Aleppo in Syria's civil war. The city seems definitely to have fallen this week, to the forces of Syrian dictator Bashar al-Assad and his Russian allies. 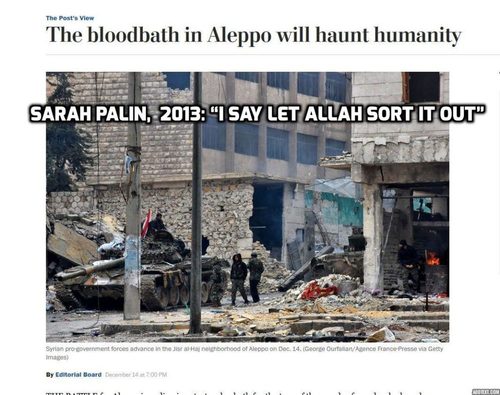 A good thing? A bad thing? Well, a lot of people, including a lot of unarmed civilians, have been maimed and killed. That's bad. But then, if the fall of Aleppo means the civil war is coming to an end, that's good. But then again, if the civil war ends with Assad and Putin the victors, that's bad because they are both deeply unpleasant people who regard constitutional government and the rule of law with scorn. But then again again, if Assad isn't fighting his own rebel generals, maybe he and his Iranian pals will concentrate on fighting ISIS, which would be good.

That's all grist for ruminations in journals of geopolitical strategy. But what does any of it mean for the U.S.A.?

Not a darn thing, so far as I can see.

When the U.S.A. was having our own very bloody civil war, the great-great-grandparents of the current inhabitants of Aleppo were subjects of the Ottoman Empire. Did the Ottoman Sultan and his pashas fret over the suffering people of Atlanta and Richmond? Did the traders and craftsmen of Aleppo? I doubt it.

Nations will have civil wars, and they do tend to be nasty affairs. If you feel an urge to help the people of Aleppo, all the usual organizations are making efforts to get stuff in, though apparently with mixed success: the International Rescue Committee, Save the Children, Médecins Sans Frontières, and so on. If the spirit of charity moves you, they'll be glad of your donations.

However, to judge from conversations I've had and comment threads I've seen, Americans are not much stirred by the Aleppo horrors. It seems to me in fact that there has been a general hardening of hearts in the West during my lifetime towards human catastrophes in the Third World.

I remember for example the Nigerian civil war of the late 1960s. I was living in England at the time so I can't speak about American attitudes; but I recall a lot of people being genuinely distressed at all the suffering there. I'm not seeing that in relation to Syria.

Compassion fatigue? Middle East mayhem fatigue? Or were those upset Brits of 1968 just indulging in post-imperial guilt? (Nigeria had been a British colony until 1960. I can still, for some reason, remember the name of the first Prime Minister of independent Nigeria: Sir Abubakar Tafawa Balewa, last seen sprawled in a ditch outside Lagos with a very nasty case of lead poisoning, victim of a coup.)

That's impressionistic, and might be wrong. Still, if Lifeboat Ethics is in fact going to be the default outlook of mid-21st century Ice People, it may be that the necessary adjustment—the hardening of hearts, the averting of eyes—has been under way for a while.

The future, said Arthur Koestler, casts a shadow back into the past.