Tom Piatak On The State Of War On Christmas 2014: Return To Trench Warfare—But Palpable Progress 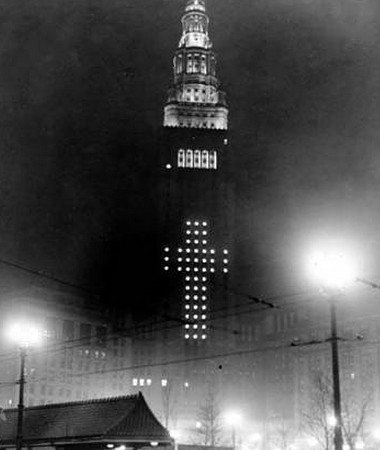 Above, Cleveland’s Terminal Tower, 1938, displaying lights in the shape of a cross for Christmastime.

The War Against Christmas in 2014 is falling into the same pattern it has assumed in recent years: evidence of both elite disdain for the festival—and entrenched popular resistance against those who want to replace Christmas with “holiday.” A school in Massachusetts initially cancelled a visit to see “The Nutcracker,” because the ballet features a Christmas tree on the stage. (The visit was reinstated after parents protested). [School reverses decision to cancel 'Nutcracker' trip, by Jennifer Eagan, WHDH.COM, November 21, 2014] Seattle saw traditional Christmas decorations replaced with monkeys and Christmas trees renamed “glow cones.” The War against Christmas spread to France, with French atheists taking to the courts to remove a crèche from the city hall in La-Roche-sur-Yon—a town in the Vendee, the part of France that heroically rose up rather than submit to the French Revolution’s plan to suppress Christianity. And in Montgomery County, Maryland, the school board responded to a request from Moslem parents to add a reference to an Islamic holiday to the school calendar by eliminating any mention of other religious holidays, including Christmas. This latter event confirmed, once again, the prescient analysis offered by E. V. Kontorovich in 1997: demands by religious minorities for public recognition of non-Christian holidays at Christmas would lead inevitably to the displacement of Christmas.

But perhaps the most egregious instance of the War against Christmas I’ve come across this year so far: an article featured on The Washington Post website on December 18 entitled “Did historical Jesus really exist? The evidence just doesn’t add up.” WaPo had to go all the way to Australia to find someone who would write this, but on the day I found it Raphael Lataster’s diatribe against the religion that created Western civilization was one of the most popular features at the paper. [Email Lataster.]

Lest anyone wonder why the WaPo had chosen December 18 to cast doubt on the existence of Jesus Christ, the paper illustrated the article with a large photo of the Nativity scene displayed last year in St. Peter’s Square.

This year also saw the customary War against Christmas Denial in full swing. But fortuitously The Scene, Cleveland’s alternative weekly, published photos making it harder to maintain such denials: black and white pictures from Cleveland Christmases past—including pictures of angels used as decorations in 1973 in Higbee’s downtown department store (where A Christmas Story was filmed); pictures of live sheep as part of a Christmas display on downtown’s Public Square in 1954; pictures of a Nativity scene in Public Square in 1963; and, most amazingly, pictures of the Terminal Tower (Cleveland’s tallest building at the time, and the tallest building in America outside of Manhattan until 1964) lighted up in the shape of a cross in 1938, 1957, and 1963. [22 Nostalgic Photos of Downtown Cleveland at Christmastime, December 4, 2014] Needless to say, these days Nativity scenes are rare in public spaces (though one—recently editorially disparaged by The Plain Dealer as “cheesy”—somehow survives on Public Square), angels don’t appear in many department store decorations, sheep aren’t used in many “holiday” displays, and skyscrapers aren’t lighted up as crosses. 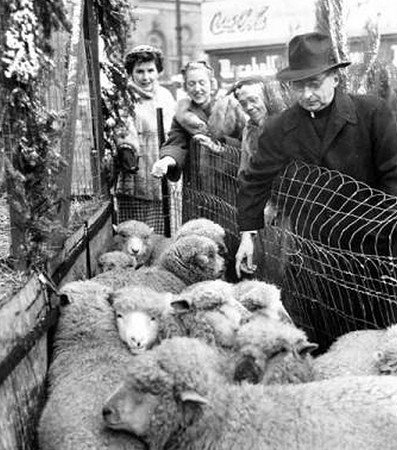 Indeed, until I saw these pictures I had no idea the Terminal Tower had ever been lighted up in the shape of a cross—and I am an almost  lifelong resident of Cleveland, but born after 1963. 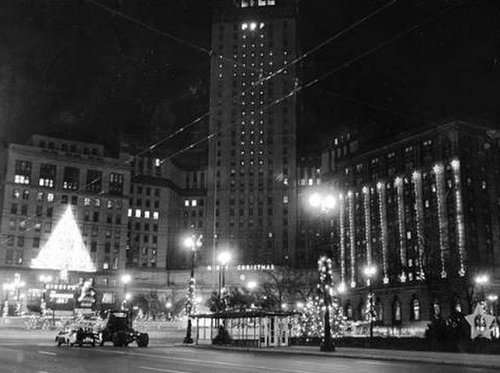 Terminal Tower and Public Square in 1957

These changes in decorations came about because of the War against Christmas—not because Clevelanders wanted them.

But not all the 2014 news on the Christmas front was grim. As The Christian Science Monitor reported on December 9, in the past five years the percentage of retailers referring to Christmas as “Christmas” went from 20% to 80%, according to the American Family Association. ['Merry Christmas' returns: How conservatives are winning the Christmas war, by Husna Haq, December 9, 2014] Texas and Missouri have passed laws expressly permitting teachers to wish students “Merry Christmas” and to teach about the history of Christmas. Similar laws are under consideration in Alabama, Georgia, Indiana, Louisiana, New Jersey, Oklahoma, and South Carolina.

(VDARE.com’s Henry McCulloch has pointed out that similar federal legislation is the only answer to the Skoros scandal, in which our kritarchy let stand New York City Department of Education astoundingly Christophobic policy of permitting “Holiday Season” displays of menorahs and stars-and-crescents while at the same time suppressing any display of Nativity scenes. Over to you, Mitch McConnell).

The sponsor of the first of these laws, Texas State Representative Dwayne Bohac, was inspired to act after his son’s school, like so many others, removed the word “Christmas” from all its winter activities. (Bohac has justified his bill on the ground that there has been an “overreaction by governmental entities regarding Christmas and Hanukkah,” and his bill therefore also protects teachers wanting to wish students “Happy Hanukkah.” It is, of course, more accurate to say that the elevation of Hanukkah by schools all across America is part of the overreaction against Christmas.)

Husna Haq’s Christian Science Monitor article also refers to data from the Pew Research Center showing, yet again, how little popular support there is for the War on Christmas. Last year Pew found that 57% of Americans prefer “Merry Christmas,” while only 27% want to hear “Happy Holidays.” When “doesn’t matter” is added to the mix, 46% opt for that, but those wishing to hear “Happy Holidays” fall to 12%, while a stout 42% still prefer “Merry Christmas.”

The poll also found that 73% of all Americans believe that Christ was born of a virgin, 81% believe He was born in a manger, 75% believe that the Three Wise Men paid Him homage, and 74% believe that angels announced His birth—showing both the lasting effect of the Bible and traditional Christmas carols and also that Americans have greater belief in Christmas than the skeptical Biblical scholars who have sought to debunk the Christmas story for decades.

Of course, 2014 also saw many expressions of impatience with the broader Culture War, of which the War against Christmas is a part. And there are times when all the wrangling over cultural issues can be tiring.

But capitulation by traditionalists in the Culture War won’t bring peace, merely defeat. As one prominent cultural Leftist is supposed to have said, just because you aren’t interested in war doesn’t mean that war isn’t interested in you.

And what Leftists really are impatient with is any resistance to their efforts to remove all traces of the America that existed before the many Cultural Revolutions of the 1960s. The relative success that traditionalists have enjoyed on the Christmas front shows why Leftists are impatient. That relative success also serves as a reminder of what ordinary people can accomplish if they are encouraged to act.

We have a long way to go before skyscrapers are again lighted up as crosses to celebrate Christmas. But such a revival doesn’t seem quite as far off as it did when some of us first began writing about, and deploring, the War On Christmas, back in the dark days of the 1990s.

Tom Piatak (email him) is the Executive Vice President of the Rockford Institute, the publisher of Chronicles Magazine.