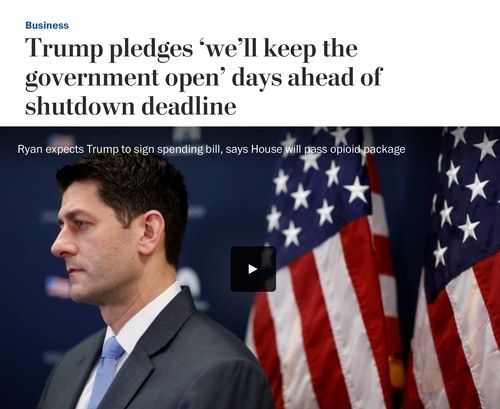 Moment Of Truth: Trump Indicates He'll Sign Bill To Avoid Shutdown, Even If It Means No Wall

President Donald Trump has great political instincts. Unfortunately, since the campaign ended, he rarely follows them. Instead, he listens to his "allies" in Congress and his advisors, all of whom seem desperate that he should fail.

Thus, President Trump is poised to sign yet another spending bill that provides billions of dollars to programs we don't need and no money for the border wall. This comes after last year when the president vowed he would never sign a bill like this again.

President Trump pledged Wednesday that he would not allow the government to partially shut down next week, backing down from his demand that Congress appropriate billions of dollars for new construction of a wall along the U.S. border with Mexico.

Keeping the government open after Sunday would require Trump to sign a bipartisan spending bill from Congress, something he had resisted committing to for weeks. But Wednesday, with anxiety building on Capitol Hill, he suggested that he planned to acquiesce.

The bill would fund the military and some other government programs through September 2019 and other government operations through Dec. 7. The House passed the legislation 361 to 61 on Wednesday and sent it to Trump...

The bill passed Wednesday punts the fight over border-wall spending until after the midterm elections, keeping the Department of Homeland Security and some other agencies running at current spending levels through early December.

It contains big spending increases for the Pentagon and the Department of Health and Human Services for 2019.

Perhaps the Republicans in Congress think a shutdown could hurt them ahead of the midterms. Well, considering that they are looking a bloodbath, any disruption at this point can only help them, not hurt them. Running on "the economy" and increases in defense spending aren't doing them any good. President Trump says good things, but he's governing as if Mike Pence was in charge. That may make the Beltway Right happy, but it's not exciting the people who turned out to vote for him in the last election, many for the first time in their lives. The Rust Belt is, once again, turning Democratic [Democrats have leads in Rust Belt states that Trump won: Reuters poll, by Chris Kahn, Reuters, September 26, 2018]

If President Trump signs this bill, it will be a struggle to get them to vote GOP ever again. He can say "Promises Made, Promises Kept" all he wants, but if he doesn't fulfill his biggest promise, the Wall, it will all sound hollow.