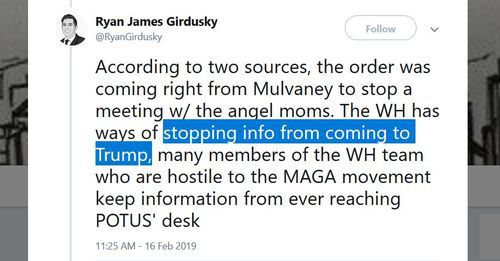 "Stopping Info From Coming To Trump"—Mr Trump, Tear Down This Wall!

I still don't get Twitter. I go there dutifully every day to check if there is anything worth noting, but there hardly ever is; and when there is, I don't know how much credence I should give it. I tweet a notice of whatever I'm posting on VDARE, occasionally post a reply to someone else's tweet, very occasionally post a thought of my own, then log off and go read something more substantial. What can I tell ya? I'm just a long-form guy.

This series of tweets from Ryan Girdusky of OANN got my attention, though. Again, I'd like to see some supporting material; but Ryan's not a loon; and his tweets conform, in a general way, with other stuff we've heard about Trump's White House.

The topic here is the Angel Moms—mothers of Americans killed by illegal aliens—who showed up at Trump's Friday press conference on the funding bill. We'd been hearing that the Angel Moms had been trying without success to get a meeting with Trump earlier, and that many had left Washington in frustration.

Angel moms came to DC early in the week, trying to schedule meetings with Trump, Schumer, and Pelosi. Schumer's office granted them a meeting, Pelosi's office called the police on them, but Trump's WH respectfully said they couldn't take a meeting.

According to two sources, the order was coming right from Mulvaney to stop a meeting w/ the angel moms. The WH has ways of stopping info from coming to Trump, many members of the WH team who are hostile to the MAGA movement keep information from ever reaching POTUS' desk

With Trump in the dark, Angel Families and their organizers brainstormed how to get POTUS' attention. They floated multiple ideas but time was running out with a majority of them having return flights on home scheduled on Thursday

They decided upon a press conference outside the WH where they would denounce the border bill. The WH caught wind of this and panicked, it would be horrible optics especially given that they had worked so hard trying to stop criticism from conservative media outlets

Mercedes Schlapp called one of the organizers, asking that they turn around and stated that Trump was fighting for them w/ this bill. The organizer refused to give saying that $1.375 billion wasn't enough for all these dead Americans.

With Mercedes unsuccessful, Kellyanne Conway called saying and also argued that they shouldn't do this to Trump. The fight got heated, words were exchanged, but in the end the Angel Families refused to give up their press conference in front of the White House.

Kellyanne was visibly upset after the conversation, Trump walked in the room and noticed something was wrong. After a week of keeping him in the dark someone relented and told him about the Angel Families.

As the Angel Families rolled near the White House, Trump called the organizer and stated he wanted to meet with them, that he had no idea, and invited them for a meeting at 9:15 AM on Friday.

Most of the Angel Families had left by that point but a few were there. But those that were there were happy to meet Trump. It was Trump's idea to bring them in the rose garden.

One of the more noticeably chatty members of the WH staff was Sylvia Mae Davis, Deputy White House Staff Secretary/ Deputy Assistant to the President, ironically she's one of the most hostile people towards the MAGA movement in the WH.

Trump went around, asking them how illegal aliens stole their loved ones, robbed them of memories and family members, they said after that they were happy he granted them the time but was disappointed they couldn't change his mind on the border bill.

A lot of you want to know about Sylvia Mae Davis. She's the Deputy White House Staff Secretary/ Deputy Assistant to the President - hired by I believe Rob Porter. According to sources in the WH, she's a major road block to anything reaching POTUS' desk on immigration

Like Porter before her she's known for stopping papers from coming to POTUS' desk, preventing staffers who share the President's view on immigration from getting policy proposals to him.

Every boss needs a "shield" of staffers, of course, to keep sales reps, con artists, and nutcases at bay. If Ryan Girdusky's account of last week's proceedings is correct, though ─ and again, I'd like to see confirmation from elsewhere ─ where immigration issues are concerned, Trump's "shield" is more like a … like a … wall!
Can't load tweet https://twitter.com/RyanGirdusky/status/1096807685369069568: Sorry, that page does not exist