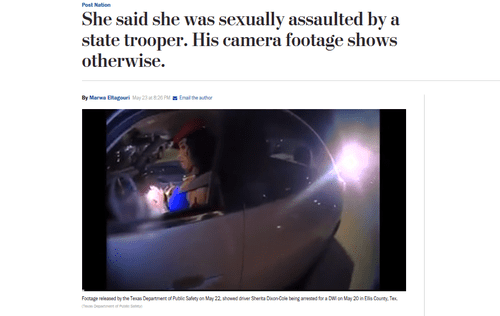 I thought women never lied about these things. Well, it turns out they do lie. Just like blacks and other minorities lie frequently about “hate crimes.”

Fortunately, we have video from the Texas State Trooper’s body camera to prove he did not ask a woman for sex in exchange for letting off on a DUI arrest. Nor did he assault her when she turned him down. It was all a big lie.

Sherita Dixon-Cole, a 37-year-old woman from Northeast Texas, was pulled over early Sunday by a Department of Public Safety officer who suspected her of driving while intoxicated.

Her story was widely shared on social media, aided by social activist and blogger Shaun King, who recently brought attention to the New York lawyer who made xenophobic comments about Spanish-speaking employees at a New York deli. King wrote in a blog post: “This system was not designed to protect us — it was designed to punish us — and for it to do anything other than that — we must force it work on our behalf.”

But on Tuesday, the Texas Department of Safety released nearly two hours of body camera footage that starkly conflicts with Dixon-Cole’s claims. While parts of the video are blurred or inaudible to conceal Dixon-Cole’s personal information, it shows her being pulled over and asked to take a sobriety test. She’s then handcuffed and transported to the Ellis County jail, where she’s charged with a DWI. She was released Sunday night after posting bond.

[She Said She Was Sexually Assaulted By A State Trooper. His Camera Footage Shows Otherwise, by Marwa Eltagouri, Washington Post, May 23, 2018].

Of course, this wasn’t just an #MeToo moment; the case had that racial angle, and King and Dixon’s lawyer had to apologize.

Maybe the activists who lie about cops, like the local NAACP chieftain did the other day, ought to learn that body cameras don’t just show us when cops behave badly. They also show us when the cops are doing what they should.

Note, by the way, how the Post described the video. The footage “starkly conflicts with Dixon-Cole’s claims.” Not good enough. It proves she lied.

But we couldn’t say that, could we? Because women—and blacks—never lie about these things.