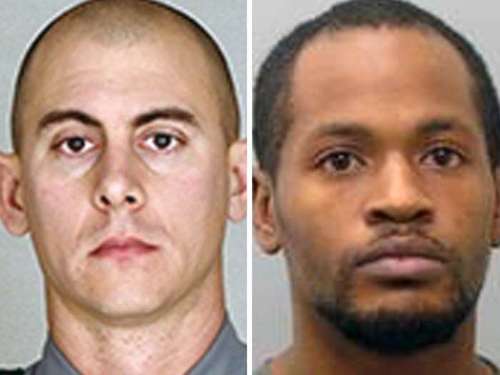 In John Derbyshire's Non-Black version of "The Talk," which, Come the Revolution, we will read to children in elementary schools, Derb offered the following advice.

It was this passage in particular which triggered many of the critics and led to the ritualistic banishment of John Derbyshire from the Beltway Right.

Recently, another white police officer was killed by a black man. Why? He tried to cut him a break. Big mistake.

A Kentucky State Police trooper wanted to do a favor for the driver he pulled over late at night. It turned out the man was driving with a suspended license, so the lawman was arranging for overnight lodging for the man and his fellow travelers, including two children.

Those plans soon unraveled, with tragic results. During the stop on a rural stretch of interstate, the driver took off. What ensued was a chain of events that led to the deaths of the lawman and the suspect, authorities said.

Police investigators were still trying to piece together what spurred Johnson-Shanks to flee during the initial stop. Johnson-Shanks had four passengers: two adult women and two young children. Neither of the other adults in the car had a driver's license, Thomas said.

Of course not. When three adults are in a car, why would any of them have a valid driver's license?

Trooper Joseph Cameron Ponder had been on the force for less than a year, which may explain his naiveté. He tried to help because it would not occur to a normal person to drive off after being stopped by police, especially with women and children in the car, and then engage in a shootout.

But to the snarling underclass the Main Stream Media insists on deifying, this is a typical decision. Joseph Johnson-Shanks, who was later shot by police, exhibited the impulsive and violent behavior that is leading to soaring murder rates around the country, even as the MSM pouts that the real threat to black lives is the police.

Oh and as you've probably guessed, the shooter was involved with the increasingly violent #BlackLivesMatter movement. Shocking, I know.

A cousin and a close friend of Johnson-Shanks, who declined to provide their names, said he worked as a handyman around his neighborhood, fixing cars and mowing grass. They said he had attended Hazelwood East High School.

The two said they did not know whether he disliked police, but that he had taken part in Ferguson street protests last year in the days after Michael Brown was killed by a Ferguson police officer. A social media site that appears to belong to Johnson-Shanks features a photo collage of Martin Luther King, Malcolm X and Michael Brown. He reposted photos of memorial sites for Michael Brown and others killed by police, asking, “Why is it taking so long to arrest those officers..."

The Conservative Treehouse reports: "He was deeply involved in the Michael Brown shooting and subsequent protests, riots, looting, arson, etc.  and even attended the funeral and graveside services for Michael Brown." And they have the pictures to prove it. [Update: Confirmed!! Kentucky Cop Killer, Joseph Johnson-Shanks, Is Ferguson Activist "Jay Mile High," September 14, 2015]

Here he is posturing in the discredited "hands up, don't shoot!" pose—the complete opposite of either his, or the late Mike Brown's actual behavior on encountering a hated white police officer. 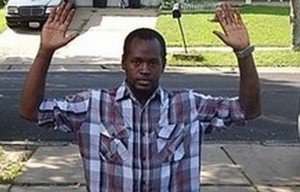 Why did Trooper Ponder die? Because he assumed Johnson-Shanks was like him and would act rationally. Instead, Johnson-Shanks killed the trooper, endangered everyone in his own car (including children), and then got himself killed.