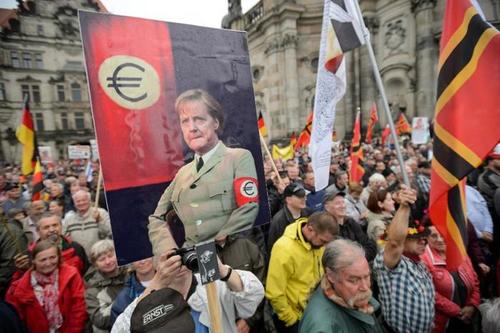 See also: All Disguise Cast Off–German Official Tells Germans That If They Don’t Like Living With “Migrants”, They Can Leave Germany, by John Derbyshire

The “refugee" crisis created by Chancellor Angela Merkel is shaping up to be the classic illustration of what happens when you confuse liberal ideology with demographic and cultural reality.

Unfortunately, she ignored three things. Now, as a result of Merkel’s determination to pretend Germans and Syrians are interchangeable, the refugee policy of Europe’s economic powerhouse is collapsing around her.

There are several factors causing this:

Instead of resettling refugees just from Syria, Merkel has triggered an Oklahoma-style land rush from around the world. Germany estimates more than a quarter of these “Syrians” come from somewhere else, and in September, the EU reported that only one in five migrants were actual Syrians [Four out of five migrants are NOT from Syria, by Ian Drury, Daily Mail, September 18, 2015]. Fraudulent Syrian passports are rife. In May, German projections for 2015 were for 300,000 to 500,000 migrants. By early October, the projections were for a million. The major newspaper Bild put the number at 1.5 million. Migrants are already demanding the government pay to import their families, meaning millions more immigrants in the years to come [Germany: Recent Muslim arrival says, “All I have to do is stay here one year and Germany will pay for my entire family to come over,” Bare Naked Islam, October 15, 2015]. The vast majority are young male Muslims, notorious for their attitude of entitlement regarding the “rights” and benefits they claim. Apparently there is no Arabic equivalent for the medieval proverb that “Beggars can’t be choosers.”

One of the best examples of the gimme attitude: this nine-minute German-language video (compiled by YouTube user InHocSignoVinces) “The ‘Refugees’ in Europe act like Disappointed Tourists Compilation” in which various gimmegrants helpfully list their criticisms.

They complain about the quality of the free food, the free medical care and free lodging, with no concept of the difficulty imposed on authorities expected to provide necessities for half a million people who just showed up.

These “refugees’” expectations of Europe are also wildly inflated. Another InHocSignoVinces video with a Nigerian, “African Illegal thought he would get a house and a car within a few months,” features one Kingsley Okoro commenting, “I never knew it is difficult to get what you want in Europe.” Many Third Worlders seem to have a Cargo Cult attitude towards European prosperity, assuming it simply naturally occurs and the only reason they don’t have it is racism.

Unmentioned in the Main Stream Media: this attitude of entitlement is part of Muslim theology. Islam is the superior religion, according to its religious texts:

“Ye are the best of peoples, evolved for mankind, enjoining what is right, forbidding what is wrong, and believing in Allah. If only the People of the Book [Christians and Jews] had faith, it were best for them: among them are some who have faith, but most of them are perverted transgressors.” (3:110)

The TheReligionOfPeace.com website has a page of similar verses that demonstrates Islamic arrogance as a scriptural value.

Muslims believe that they are Allah’s special snowflakes and we infidels exist to serve them. The British jihadist, Anjem Choudary, was secretly filmed telling other Muslims they should mooch maximum welfare as the “jihad seekers allowance” so they could use their time to pursue Islam’s religious war against the West. The Boston Marathon bomber brothers similarly got benefits and avoided work to better engage in jihad.

In the modern era of mass immigration, Muslims see welfare as the new version of the jizya tax traditionally used to exploit non-Muslims in societies with Islamic governance. Getting free money and services from the infidel governments in Europe and America is regarded by Muslim immigrants as their birthright.

Merkel’s proclamation of Open Borders, and Muslims’ attitude of entitlement-cum-jihad, are both multiplied by the internet. Today’s Camp of the Saints conflagration is fueled by the smartphones that every Islamic male carries—something the New York Times called a 21st century “migrant” essential. [A 21st-Century Migrant’s Checklist: Water, Shelter, Smartphone, By Matthew Brunwasser, New York Times, August 24, 2015]“Refugees” use the phones to check border crossings, locate available freebies and dodge police.

“Refugees” and illegals won’t put social media aside after they become settled in some European community. They will use digital communications to organize demands for more free stuff, because Muslims can never scrounge too much from the despised infidels.

For a little context, remember that 600 Salafist Muslims ran amok and 110 were arrested for a rather sizeable riot against a German free speech event in Bonn in 2012. Interestingly, the Muslims were encouraged to act out for Allah by a Facebook post. And that was before they received several hundred thousand reinforcements.

What does the future hold for Europe? Certainly, this mass of young Muslim men are a potential army, waiting to be activated. Some will be susceptible to propaganda and guilt-trips at the local mosque that they have become too assimilated and comfortable in the infidels’ culture. Imams keep their jobs by preaching that loyalty to Islam is Job #1 for all Muslims and that allegiance requires jihad. Germany’s no-go zones for non-Muslims will expand from neighborhoods into larger areas.

The level of chaos is already frightening and has caused the initial approval of Merkel’s extreme welcome mat to disappear, according to polling in Germany. Violence in the refugee camps is common: doctors won’t visit the Calden camp without security.

The refugee camps are reportedly very unsafe for women. Muslim men take advantage of the chaos to engage in rape and child abuse.

As the “refugee” men are released into local communities, German women will become the targets. In 2011 it was reported that Norwegian women were dyeing their blonde hair black to make themselves less noticeable to marauding Muslims. Back in 2005, VDARE.com reported the “Immigrant Rape Wave in Sweden.” Now, schools are telling German girls not to wear short skirts so as not to provoke rape.

Islam permits – encourages, actually—the rape of non-Muslim women, because infidel females are lesser beings twice over according to the Koran. So German women today are far less safe because of Angela Merkel’s foolishness. Where are the feminists?

In 2010, the German Chancellor observed that multiculturalism in Germany had been a failure. But five years later she has inundated her country with the worst sort of diversity on earth. Syrian Muslims aren’t just another group of unfortunate displaced refugees: they are members of the West’s implacable enemy of 1400 years standing, whose totalitarian culture is incompatible with our tradition of freedom. But Merkel has welcomed the whole Islamic package, an all-inclusive political system which includes polygamy, misogyny, child marriage, terrorism, animal cruelty, intimidation and an aversion to free speech.

No German voted for this.

Stein’s Law states that things that can’t go on forever, don’t. The German elite obviously thinks it can force the refugee influx down the nation’s throat.

That’s what the GOP elite thought about an Amnesty/ Immigration Surge—and look what happened to it: Donald Trump.