Dumb and Demanding: Asylum Seekers in Germany Climb a Tree

Thousands from the unfriendly and dysfunctional third world have descended upon the shrinking outposts of civilization, demanding access to maximum free stuff from the hard-working taxpayer. Germany is a popular target of foreign moochers because it is wealthy — a result of its citizens’ industriousness.

Below, asylum pests in Munich ensconce themselves in a tree to demand full benefits and permission to stay in Germany — just because they want it. 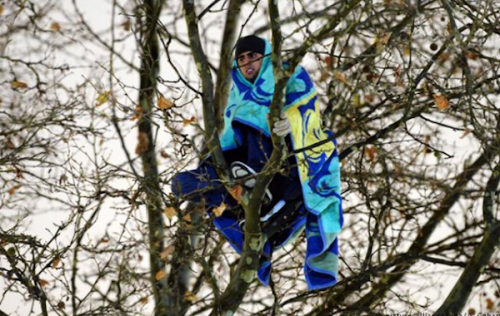 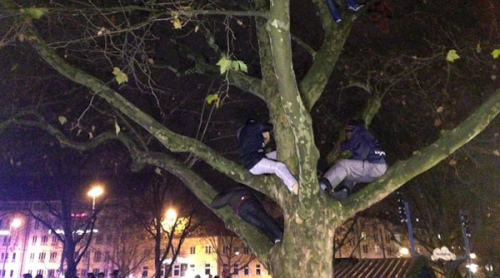 The problem is the asylum system itself, where economic migrants are allowed to stay in first-world nations based on spurious claims of suffering. Foreign freeloaders then develop a massive sense of entitlement based on the belief they can move into a functioning country and stick their snouts into the gravy train.

Several refugees in central Munich climbed trees to avoid police dispersal of a protest. Despite frigid temperatures, they held a five-day outdoor hunger strike to create awareness of their housing problems and their legal status.

About 30 refugees began to refuse food on Saturday. Later, they also stopped taking fluids, fighting for their right to stay in Germany and protesting against shared accommodation.

On Wednesday, the asylum seekers held a press conference.

“We’re mad,” said the group’s spokesman Adeel A. “We see no positive signals from the politicians.”

Later that day, dozens of police and firefighters arrived at the camp at the city gate Sendlinger Tor in central Munich to clear it out, local media reported.

“Give us our rights!” shouted the protesters – six people, who fled up two trees after the police dispersal. “This protest will continue!”

Threats to commit suicide were even heard from atop one of the trees.

The protesters were eventually persuaded to down from the trees Thursday morning by the authorities, who decided to put an end to the lingering hunger strike, as it posed a health threat, physicians warned the city administration.

“They have achieved their goal – to initiate the discussion,” Reiter told dpa news agency.

The refugees were satisfied with the discussion with the Mayor, they said.

“It was incredibly cold,” one of them told dpa. “We were so tired, but we were all strong enough to endure and fight for our rights.”

Most of the asylum seekers were taken to hospital due to their weak condition and exhaustion, with temperatures dropping to +3 degrees Celsius overnight.

“The rapid escalation of the situation came for all of us as a surprise,” Wilfried Blume-Beyerle, head of the KVR, the local visa registration office, told Süddeutsche Zeitung newspaper.

This year, Germany has received the largest number of asylum seekers in the world. Over 65,000 people applied for asylum between January and June, and roughly 127,000 people sought refuge, posing a major new challenge, Deutsche Welle reported.