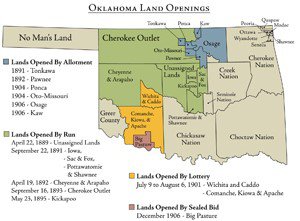 The Oklahoma Land Run was one of the most incredible episodes in America’s conquest of the continent, and one of the most important parts of the state’s history. And that’s precisely why “our” federal government is making sure students don’t learn about it anymore.

The Oklahoma Land Run was how land was distributed to white settlers in the northwest quarter of Oklahoma, not counting the Panhandle. (See map, above). The land runs took place from 1889 to 1895.

The Land Run (also called Land Rush) was a race for land. Prospective landowners lined up along the outside perimeter of the territory being settled. At noon the guns were fired, and the participants raced to claim 160-acre portions of land. If they could occupy the land for five years, they would receive title to it.

My great-grandfather, Illinois-born Charles Ephraim Wall moved to Oklahoma with his family in 1893. At sixteen years of age, he was too young to stake a claim himself, but his family was in the Cherokee Strip Run. The family lost out in the run because “sooners” (people who snuck in early to claim the land) got there first. But if you didn’t get acquire a farm in a land run, if you just stayed in the area you might actually get some property, as some claimants decided to leave. So my great-grandfather stayed in Oklahoma and eventually founded the farm on which I grew up. 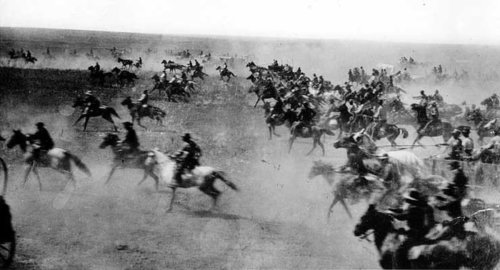 Not a reenactment—a contemporary photograph of the original land run.

The Land Run is annually reenacted in the spring in many Oklahoma schools by grade school students. They go outside on a playground or in a park, race for little tracts of land, file a land claim and have a picnic.

The Oklahoma Historical Society even has a page explaining how to conduct a land run for kids, it’s called Make a Land Run!

But not in Oklahoma City anymore, thanks to the meddling of the Obama Regime and the “activism” it enabled.   Reenactments are now banned in one of the state’s largest school districts [We feel like it celebrates genocide,” Oklahoma Land Run reenactments a thing of the past for one district, by Sarah Stewart, KFOR.com News Channel Four, December 9, 2014 , video available at same site]

Incidentally, Oklahoma City was founded by the first land run, on April 22nd, 1889. By the end of the day, the new city’s population was 10,000. So in a city founded by a land run, the kids can’t reenact it.

How did this happen? According to KOR’s Stewart:

It all started about a week and a half ago when representatives from the White House were in Oklahoma City conducting ‘a listening tour.’

They were trying to see what it’s like to be a Native American student in Oklahoma City Public Schools.

And what did they discover?

They found out those Land Run reenactments can be a source of anger and confusion for some students.

That’s a little vague. How many people did they interview? Just a few activists? Stewart quotes a local one:

Having the kiddies reenact the land run “celebrates genocide”? A strong accusation, but one bandied about loosely these days, especially by the kinds of people who serve on “Native American Parent Service” Committees.

This Indian activist, Sarah Adams-Cornell, is a member of the Choctaw tribe. But the Choctaw tribal territory, in southeast Oklahoma, was not settled by land runs. (Nor was the territory of the late Dr. David Yeagley’s Comanche tribe—whites settled that territory by lottery in 1901).

Historically, Adams-Cornell’s claim is simply false. The land runs were not genocide. The territory opened for settlement in the land run had already been ceded by Plains Indians tribes as a result of the 1887 Dawes Act. The Act broke up the communal tribal holdings of the Plains Tribes and granted Indians individual land holdings (and U.S. citizenship). What land was left over was opened in the land run.

The goal of the Dawes Act was to encourage the assimilation of American Indians into Anglo-American society, by converting them into private landowners and farmers. It may not have worked out for Indians who were committed to their tribal way of life, but calling it “genocide” is a stretch.

But activist Sarah Adams-Cornell specializes in looking for things to be offended about. She was also present at an Oklahoma City school board meeting in which the board, at the behest of Superintendent Rob Neu, voted unanimously to remove the Redskins mascot from Capitol Hill High school. [OKC school board votes to remove Redskins nickname from Capitol Hill High, By Tim Willert, News OK, December 8, 2014]

And Sarah Adams-Cornell has no problem distorting history to achieve her goal.

For years now, Native American parents in the Oklahoma City Public School District have been trying to put a stop to the reenactments. “Native Americans were not allowed to run in the Land Runs, their options were very limited. You either left the land or you were killed,” said Adams-Cornell.

Back in the real world, as I’ve pointed out, the lands opened in the land runs had already been ceded by the Indian tribes, and individual Indians had already received land allotments.

The comments of OKC school superintendent Neu show that it was the White House’s intervention that was critical in the Land Run ban.

“The White House was here, conducting a series of discussions on Native American issues,” said Rob Neu, Oklahoma City Public Schools Superintendent. Neu says that caused them to conduct a survey across the district to see how many teachers were still using the Land Run reenactment. “We found one classroom. So, it was not something that was embedded in the curriculum and we found one classroom that was participating in it,” said Neu.

So, now, just in case future teachers in the City want to stage a reenactment, they have been banned from doing so.

Oklahoma City schools have now written it into their curriculum that Oklahoma history will be taught without Land Run reenactments.

The eventual goal, of course, is to prevent reenactments in the whole state

It’s a victory for some parents who hope it reaches other districts in our state.

Does that mean we just won’t talk about the Land Run?

Obviously, this means that students must be taught to be ashamed of how their state was created. The real question at stake is whether Oklahomans and Americans have the right to celebrate their roots. Increasingly as we saw with the 400th anniversary of Jamestown, the answer is no.

But the fact is that the United States was founded by English settlers on the East Coast who moved westward, sometimes in conflict and sometimes in cooperation with Indian tribes. All of us, including American Indians, benefit from the society that was formed here. Are we required to hypocritically curse our own founding?

According to our federal government, the answer is yes.

Which means it’s not really “our” government any more, is it?