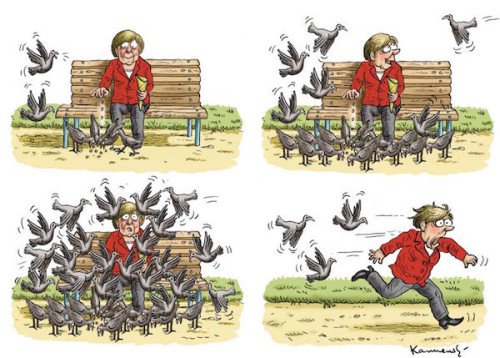 Fastidious Foreign Freeloaders Demand to Be Resettled in Germany

Illegal aliens have become picky shoppers during the current Camp-of-the-Saints-style invasion of Europe. The intruders are plugged in to the internet on their smartphones to keep up on optimal routes, and they are similarly knowledgeable about where the big freebies are. Hint: the favored goal on the invaders is Germany, thanks to Chancellor Merkel’s invitation to her nation’s generous welfare to anyone who can get there.

Syrians apparently have high standards for the freebies they are willing to accept, as has been noted earlier.

A Sky News reporter poked around Munich, where he found Germans enjoying the Oktoberfest beer festival and unhappy foreigners in the migrant center the city has set up for them. One sniffy freeloader said he would go back to Syria if Germany wouldn’t take him and his family.

REPORTER: In the north of Munich an old military camp is now a migrant center, a microcosm for the problem Europe faces. While some of the residents are newly arrived from the conflict in Syria, many are not. There are Afghans here, Senegalese, Albanians, Pakistanis and Bangladeshis. Housam Kbieh fled the Syrian capital Damascus with his wife and two sons, one of whom is disabled and needs specialist medical care. If Europe’s leaders now force Housam to relocate from Germany, he will go home instead.

HOUSAM: I go back my country. Everybody if we ask anyone Germany not accept people here they will not come.

REPORTER: So it’s Germany or nothing as far as you’re concerned.

HOUSAM: Germany or nothing. I pack my family.