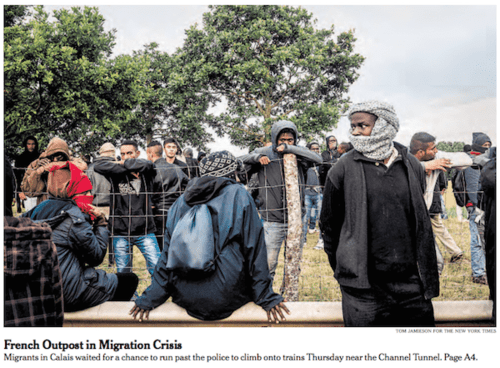 Chancellor Angela Merkel made it all sound so noble and generous in the beginning — Germany would welcome the suffering Syrians fleeing the civil war as an example of its moral leadership. Then the foreigners started arriving by the boatloads, overwhelming existing infrastructure. As a result of the overwhelming chaos, 80 percent of Germans now want a return to border controls.

The numbers have been crushing. Back in May, Berlin said it expected 300,000 to 500,000 this year, double the number in 2014. Now just a few months later, a major German paper reports that the government projects the 2015 total to be 1.5 million. Earlier this week, an EU official said three million more could leave Syria as refugees.

Plus, hordes of economic moochers from Africa to Afghanistan have seen the anarchy as an opportunity to reach Europe’s generous welfare offices. In fact, thousands of illegal aliens are camped out in Calais France (shown above) in hopes of reaching Britain, which is seen as being the top freebie state.

The German people must be getting spooked by the behavior of the newbies taking advantage of the open borders. For example, 400 Pakistanis and Albanians rioted on each other in the Calden “refugee” camp in Calden, central Germany earlier this month. Doctors won’t go there without security. The camps have experienced sexual harassment and rapes which authorities have hidden so the public wouldn’t understand the extent of the disaster. Even though the press has focused on sympathy-arousing pictures of children, the great majority of migrants are young military-age men, which is not a refugee demographic. And of course the Syrians are nearly all Muslim, some of whom are suspected of being jihadists.

Following is a video from Sunday of a PEGIDA march of around 3000 participants on the Czech-German border to protest the government’s open-borders policies. RT refers to the groups as “far right” but the marchers are visibly not skinheads. Instead, normal-looking people of all ages took part and brought the kids along with their signs and German flags.

Here’s more detail about the poll showing the German people have had enough diversity anarchy shoved down their throats.

Four-fifths of respondents told pollsters that they were in favour of border controls in a new survey released on Monday.

The poll, conducted by Initiative Markt- und Sozialforschung (Initiative for Market and Social Research) shows a big turnaround in opinion on the migrant crisis in recent weeks.

Well over half – 59 percent – of respondents thought Chancellor Angela Merkel had been wrong to allow Syrian refugees to travel unhindered to Germany from Hungary.

That was a big turnaround from the last poll on the subject, in which 66 percent of people asked said it had been the right decision to let the Syrians in.

East Germans were particularly opposed to Merkel’s decision, with 69 percent – more than two-thirds – calling it a bad choice.

By contrast, the gap was narrower in southern Germany, where most refugees have been arriving.

Just over half of respondents in Bavaria and Baden-Württemberg – 55 percent – said that Merkel had made the wrong call.

The survey showed that two-thirds of Germans continue to see their country as one that welcomes immigrants, but more than three quarters of people were unhappy with how the EU has dealt with the refugee crisis.

They thought that the first EU country where refugees arrive should be responsible for taking care of them.