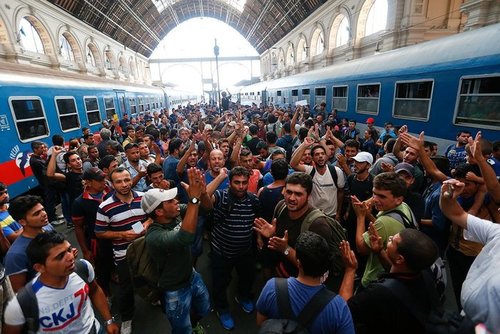 Top Three Posts of the week: 1) List of ORR “preferred” communities has some additions

Since everyone (thousands of you) really liked the map of America with the 180 or so cities where the US State Department and the Office of Refugee Resettlement (HHS) are resettling refugees, I thought it might be a good idea to update the “preferred” communities list.

The ORR says these 82 (or so) preferred communities offer the best chance for refugees to find jobs and become self-sufficient, but really they are the cities with overload problems and with especially challenging and needy refugees (cases needing “intensive case management”). So to help ameliorate the problem, the feds throw more grant money to the contractors!

13 Senators and 71 Members of Congress sent a letter to President Obama on Friday urging the administration to hurry-up with the “screening” process for Syrian refugees and get them here more quickly.

Previously we told you about the Senate Jihad Caucus which called for MORE Syrians to be admitted to the US. Looks like we have more Senators to add to the Caucus....

(97% of the Syrians admitted so far are Muslims chosen by the UN.) …Go here and see if your Senators and Member of Congress are on the list of members who signed a letter disregarding American security to advance their own agenda.

Invasion of Europe news…. 70% of supposed ‘refugees’ arriving in Germany are men!

(This story supplied the above picture)

...from Reuters (emphasis is mine):

Germany’s police union and women’s rights groups accused the authorities on Tuesday of playing down reports of harassment, sexual assault and even rape at refugee shelters because they feared a backlash against asylum seekers...

My own pick from RRW’s menu last week was MN Governor Dayton: Don’t like immigrants, get out of Minnesota! October 16 2015

...Dayton bluntly stated his opinions on the racial tension in St. Cloud and across the state in regards to immigration.

Mark Dayton a limousine leftist from the rich family which founded the Target retail chain was a Vietnam War protester and draft dodger.

It is the American-hating rich who are destroying America.