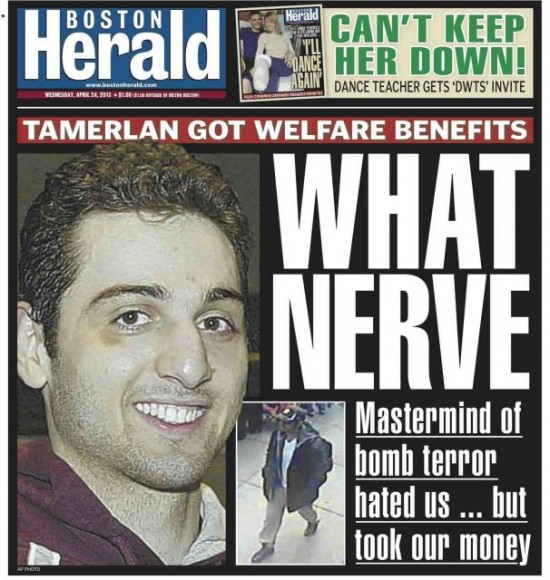 In this week’s edition of Jihad Watch, a segment on SunTV’s Arena show, Robert Spencer explained how the Boston bomber brothers, two strapping young men from Kyrgyzstan, were happy to scoop up welfare benefits from willing provider Massachusetts.

In short, Islam is a supremacist religion which preaches that its followers deserve everything they can mooch from inferior infidels. There’s even a special Islam vocabulary word: jizya which historically referred to the tax non-Muslims were forced to pay to Muslim rulers in dar al-Islam. The money is part of a whole system of second-class citizenship to keep infidels subservient and in their place, like Coptic Christians in Egypt today.

Radical Muslim pest Anjem Choudary was recently recorded exhorting his co-religionists to soak British taxpayer for a “jihad-seekers allowance.” Work is for suckers, he said, and Muslims should use the welfare cash to promote the destruction of western civilization and setting up a global caliphate.

Another modern twist is the Muslim Brotherhood leaders of Egypt regarding America’s stupid-generous foreign aid as jizya, seen as tribute from lowly infidels and not requiring any cooperation in response.