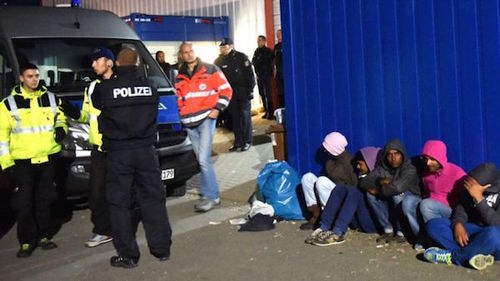 What was Chancellor Angela Merkel thinking when she said Germany would accept all asylum-seekers from war-torn Syria? Did it not occur to her that the offer of first-world freebies would prove irresistible to grifters throughout Africa, Asia and the Middle East? Why wouldn’t millions come, Camp of the Saints style?

Merkel assured Germans that the government could handle the influx, but since the disastrous reality has become obvious, popularity for the scheme has been dropping precipitously.

The chaos is getting ugly. For example, German doctors refuse to visit the Calden refugee camp without a police escort to protect them from the hostile inhabitants. The camp experienced a battle a week ago where hundreds of Pakistanis and Albanians fought each other. An October 2 headline from RT notes Refugee camps may blow with violence, German police officials warn.

Recent polling showed Merkel has dropped 9 points in favorability over one month regarding her leadership in the illegal alien crisis.

Another sign of the policy failure was the Bundestag debate about restricting asylum laws to cope with the excessive multitudes.

It’s curious that Germans apparently think Middle Eastern Muslims would be acceptable as new workers, according to the article below, while there are plenty of unemployed Europeans in places like Spain (unemployment rate 22.2 percent in August). Surely the cultural stress in bringing in Spaniards, for example, as workers would be less than with Syrian Muslims.

Majority of Germans worried about refugees, The Local (Germany), October 2, 2015

Increased numbers of refugees are giving Germans second thoughts about their support for Chancellor Angela Merkel’s welcoming policies, with more than half now saying they are concerned about the new arrivals in the latest polling.

In the latest “Deutschlandtrend” survey commissioned by public broadcaster ARD, 51 percent of people said they were afraid because of the large numbers of refugees arriving compared with 47 percent saying they were unafraid.

The previous poll, just three weeks ago, put that same number at 38 percent.

The turn in the polls has been reflected in changing rhetoric from mainstream politicians, with Vice-Chancellor Sigmar Gabriel telling Der Spiegel on Friday that “we are quickly hitting the limits of our capabilities in Germany.”

While there was no legal limit to the number of asylum seekers Germany might host, Gabriel said, “there are practical limits to the capacity of local communities”.

Refugees hit Merkel popularity Arrivals sped up following Merkel’s decision to allow Syrian refugees stuck in Hungary into Germany, rather than forcing them to remain in the first EU country where they set foot as the so-called Dublin regulations require.

In September alone, 160,000 refugees were registered for the first time in Germany, although the actual number arriving is likely to be significantly larger.

The Chancellor’s approval rating sink nine points over the last month, to 54 percent.

Meanwhile support for the chief critic of her asylum policies from her own conservative camp, Bavarian state premier Horst Seehofer, surged 11 points to 39 percent.

Less than half of respondents – 48 percent – said they were satisfied with Merkel’s government, down five points.

New workers needed to fill jobs A majority of the people surveyed – 58 percent – continue to believe that refugees are needed to shore up the German labour market, which is struggling with a lack of skilled workers.

That compared with 39 percent of people who thought that the number of refugees arriving was so large as to threaten Germany’s prosperity.