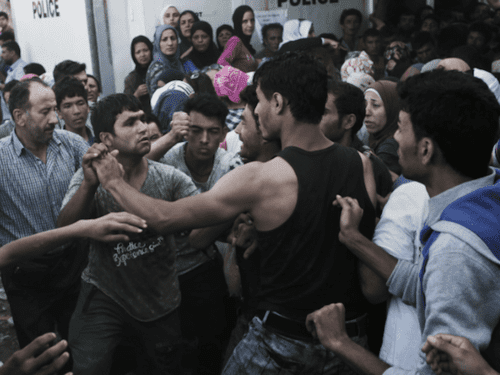 How bad is violence among the diverse illegal aliens and refugees invading Europe and heading for Germany now (who happen to be mostly Muslim and mostly young men)?

The same article notes, “Asylum seekers are driving a surge in violent crime in cities and towns across Germany. German authorities, however, are downplaying the lawlessness, apparently to avoid fueling anti-immigration sentiment.”

Let’s not think badly of the barbarian invaders!

Breitbart reports: Study: Violence in German Migrant Centres Part of ‘Everyday Life’. One cause given is that the foreigners “are increasingly diverse in their regions and ethnic origin.”

Wait, don’t they know that diversity is supposed to be celebrated?

A couple years ago, Chancellor Angela Merkel declared that Multiculturalism Is a Failure in Germany, but now she is using it to destroy her nation’s identity as a historically Christian nation and endanger the safety of all through Islamization.

A recent television interview of a police officer provided more information about the chaos happening on at ground level:

TV INTERVIEWER: And now in the studio I am honored to greet the chief of the German police union, Rainer Wendt. Herr Wendt, the cabinet has wasted no time passing these new asylum laws; is that enough?

RAINER WENDT: Well, first, it’s a good sign, and it shows that politicians can react, but what I’d like to see is that politicians react in time. Things always have to go up in flames before they manage to get anything done. All of this should’ve happened at least a year or so ago when we saw the first signs of the chaos.

INTERVIEWER: What do you mean with go up in flames?

WENDT: In our asylum camps all hell broke loose; at the border in southern Germany, and in Bavaria especially, it’s hell. Our colleagues down there can’t ever take their boots off anymore. But that’s not just since last week or since last month, but all year. Our federal police and the Bavarian county police especially, and also from other countries, have for months now been heavily overwhelmed, and now politicians are acting like they’re totally surprised, but that can’t be; nobody is surprised, and they should’ve reacted a lot sooner.

INTERVIEWER: We hear of mass brawls in asylum camps, we hear of robberies in grocery stores, which is another strain on the police. Are you worried that crime will rise because you are overwhelmed?

WENDT: Of course that’s an issue and there are three areas we consider. The first is attacks on asylum camps, which is a number that has exploded in recent months now, and there it is our duty to protect these camps. And then there’s criminality among the refugees, meaning, rapes of women and of children, massive use of violence, criminal activities such as exploitation, slavery, we see it all there. Those are not just little squabbles because they’re living in cramped spaces; these are territorial conflicts, dominance struggles, I mean fanatical religious groups that can’t be separated easily. Our private security personnel are completely overwhelmed. We don’t have enough and they are not qualified enough.

INTERVIEWER: Did you conclude that these refugees for the most part have no respect for the police as a whole?

WENDT: No, they respect the police to a point, but they don’t respect our rule of law. They instinctively know that our laws are weak and they how that no matter how badly they behave, it has absolutely no consequence for their asylum status. They pretty much can do whatever they please, and the state barely reacts. The judiciary and the political part of the state should make it very clear to these people from the get-go that in this country the Shariah does not apply, or any other religion, but that here the German rule of law applies, and that we are ready to enforce that. This is not about family squabbles; we are talking heavy crime, extreme criminal offenses, and we have to show that whoever commits such an act, in essence changes from being persecuted to becoming a persecutor, then our rule of law has to react. These people have to be pulled out immediately, and for that reason we need to open up the deportation facilities again. That’s where these persons belong, and they don’t have the right to await their asylum proceedings in freedom. It is quite possible that they will have to await this while sitting in prison.

INTERVIEWER: Herr Wendt, I have one last question for you. We hear again and again that we should separate the refugees according to their religion and their ethnic background. Do you think that’s a solution?

WENDT: No, I believe that is not sufficient. The thought behind this is to a degree a sign of helplessness, by separating them, but that’s hardly even possible; even for religious reasons alone it’s difficult. Who do you want to separate from whom? The Sunnis from the Shiites, the moderate Salafists from the radical Salafists? When they’re in the end all followers of the Muslim belief system, it’s just not possible. As far as separating by ethnicity it’s the same thing. When we do that we basically already create parallel societies among the refugees; it just wouldn’t work. I believe we have to concentrate on protecting those in need of protection, such as women, families and children, and especially Christians among these refugees, they need special protection from the state. And beyond that it has to be made very clear to everybody that lives in these camps, here the German rule of law is in effect, and the law has to be enforced, and whoever breaks the law, only has the right to imprisonment and deportation left.

INTERVIEWER: Rainer Wendt, Chief of the German Police Union, thank you for the conversation.